TO YELLOWSTONE NATIONAL PARK IN WINTER 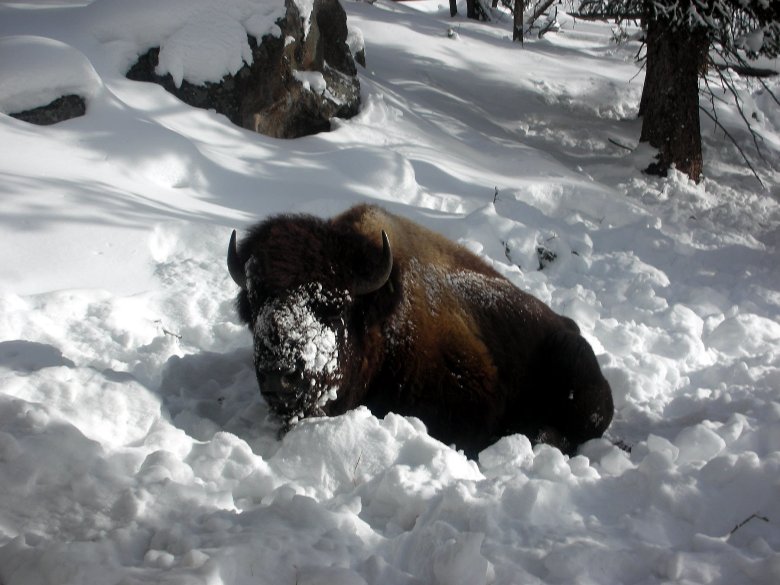 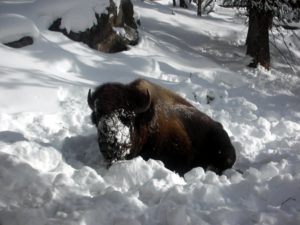 Old Faithful spews thousands of gallons of steaming water right on schedule, but Miguel isn’t the least bit interested. He just lumbers by us searching for lunch.

That’s probably because Miguel, so named by my two daughters, is a 1,800-pound bison who sees Old Faithful every day. Yellowstone National Park’s (www.nps.gov/yell) most famous geyser has rarely missed an eruption – roughly every 92 minutes — in the past 120 years. Bison, for their part, were nearly extinct at the turn of the 20th century. Today, there are some 3,500 in the park.
We’re having one of those I-can’t-believe-what-we’re-seeing moments, as we snowshoe on trails around Old Faithful on a cold but sunny winter afternoon. Did you know Yellowstone has more thermal features than anywhere in the world – some 10,000 geysers, bubbling mud pots, hot springs and more. That’s half of the world’s hydrothermal features!

There’s no better time to see them – and the park’s wildlife – than winter when you won’t be fighting the crowds. That’s what we told Gertrude, another bison we encountered snowshoeing around the Geyser Basin. (Gertrude ignored us too.)

Consider that more than 15,000 people visit the park each day in summer, while all winter only 150,000 people visit. Of course it’s a lot easier in the summer. In winter, all park roads are restricted to over-snow vehicles like snowmobiles and snow coaches, except for the North Entrance and the portion of US 191 that passes through the west side of the park. Only two hotels are open – Mammoth Hot Springs Hotel & Cabins and Old Faithful Snow Lodge & Cabins, rebuilt in 1998 and 1999.

That’s why we feel as if we’ve got the huge (2.2 million acres) park to ourselves. The last time we were here in the summer, there were so many people around the kids could barely see Old Faithful. Now we’ve got our pick of viewing spots and take a trail up to an observation point where we can see Old Faithful and all of the surrounding area. A small herd of Bison is in the distance. Snowshoeing is surprisingly easy, especially on the groomed trails. We know we’re supposed to stay 25 feet from the wild life, but tell that to Gertrude and Miguel.

Many people think Yellowstone in winter is closed or just for snowmobilers, but that has changed with new federal regulations that not only restrict the number of snowmobiles permitted in the park (720 this winter, 540 next year), but require that they be commercially guided and not used off road. (If you want to take the kids, visit www.visitmt.com and www.wyomingtourism.org for more on snowmobile tours. Figure on spending $250 a day for two people on one machine. Even grade-schoolers can participate, but you’ll need a driver’s license to drive your own snowmobile.)

In addition, only snowmobiles that satisfy emissions and noise requirements are permitted. As a result of the controversy, some traditional snowmobilers are staying out of the park, giving way to other outdoors enthusiasts who come to cross-country ski, snowshoe and, of course, see the geysers and watch the animals, says Rick Hoeninghausen, Yellowstone’s director of sales and marketing for Xanterra Parks & Resorts, the park’s concessioner.

Besides the bison, we saw elk and moose, coyote, trumpeter swans and even a wolf. Another plus: A winter getaway here won’t bust the budget. Hotel rooms are under $100 a night and there are attractive packages that bring down the costs even more. The kids won’t get bored: There’s ice-skating, ranger programs (here’s your chance to find out everything you want to know about Grizzlies and geysers) and guided cross-country ski and snowshoe tours. There are more than 130 miles of groomed trails, including the ones we took around the Geyser Basin, and massages afterward to relieve sore muscles.

To encourage those looking for a new kind of active winter getaway, Xanterra has partnered with the Yellowstone Association to offer lodging and learning programs where you can track animals, snowshoe or cross-country ski (take a lesson for just $20), learn about wolves and more. (Just remember that the park hotels close in early March www.travelyellowstone.com.)

We opted to spend just one day in the park — it was difficult to draw my gang away from the slopes for longer. Rather than ride into the park on snowmobiles from the town of West Yellowstone, we opted for a trip on a historic yellow snow coach — kind of a small, boxy heated bus on tracks that were first used 50 years ago. Our friendly driver, Doug Hilbourn, obligingly stopped to point out a bald eagle perched in a tree and other wildlife along the way.

We rented our snowshoes at the Old Faithful Snow Lodge and headed out on our own. We snow-shoed past bubbling, steamy waters and watched Old Faithful go off a second time. It was so quiet – and beautiful. Even my ski slope-loving daughters wished we had more time to explore the backcountry trails. I wished we had time to linger by the inviting fire in the Old Faithful Snow Lodge, but we needed to catch our snow coach by mid-afternoon for the 30-mile trek back to West Yellowstone. (In winter, many people also enter the park from the entrance near Jackson Hole, Wy.)

But our adventure wasn’t over when we headed out of the park. Down the road, a wolf trotted right by our snow coach. That only happens once or twice a season, our driver told us. We also saw a mama and baby elk.

There was just one problem: we were starved after all that snowshoeing. We figured a burger would be the perfect end to a stellar vacation day so on the way back from Yellowstone we dropped in at The Corral, a local institution about 10 miles south of Big Sky. Good thing we no longer have any vegetarians in the family. There are bison and elk heads on the walls and other animal skins on the ceiling. The burgers were terrific. So were the onion rings and the mud pie the waitress insisted we order.

We dug in, hoping Miguel and Gertrude were enjoying their dinners just as much.