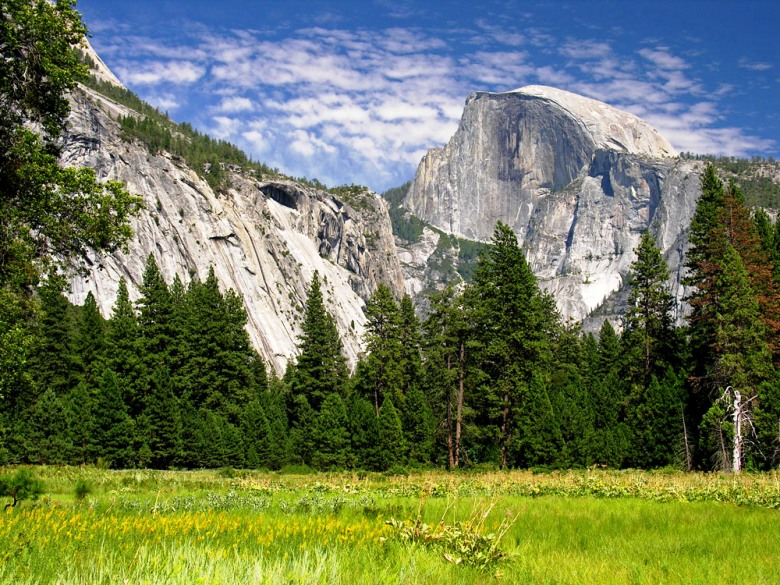 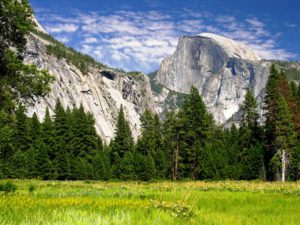 Half Dome from Cooks Meadow.

Rivers Klopson, 5, turns cartwheels in the sunshine on the flat rocks next to Yosemite’s famous Vernal Fall, oblivious to the strangers smiling at her.

Like the Klopsons, who live near Monterey, Calif., and chose to visit Yosemite in October to avoid the summer crowds, we’ve just finished the challenging hike up 600 slick granite steps to the top of this spectacular waterfall, getting thoroughly splashed in the process. (No wonder they call it the Mist Trail!) The views of the falls along the way are captivating and nowhere in the world are so many waterfalls concentrated in so small an area as in Yosemite Valley. It’s easy to see why this is one of the park’s most popular hikes, drawing some 2,000 hikers daily in summer, despite the 1,000-foot gain in altitude.

“I liked getting wet,” Rivers added.

I smile remembering two other kids about the same age who were equally proud of themselves for making it to the top of Vernal Fall, also their first “big hike” in Yosemite.

Those proud kids were my two — Reggie and Matt. We left baby Melanie at home as the three of us embarked on a fall tour of Northern California for a book I was writing. Some 15 years later, my knee a littler worse for wear, I’m back on the same trail with my husband Andy, Reggie and her boyfriend Dan Foldes, both of whom now live in San Francisco.

Reggie has grown up to love the outdoors; she has led teens on summer backpacking trips in Yosemite, in fact. All those national parks trips when she was a kid — like the one to Yosemite — she says, spurred her interest. (Visit www.nps.gov and a new interactive Website www.ohranger.com where you can ask questions and share your experiences.)

Reggie leads the way up the Mist Trail with a big smile on her face, just as she did then, stepping around water that’s pooled from the previous night’s rain. But this time it’s she who’s encouraging me, not the other way around. On the way, I joke that I’d forgotten the M&M’s, the one thing I always tell parents to carry on a hike. Instead we have Nature Valley Granola Clusters and almonds, along with our (reusable) water bottles.

Fall, we agree, is a spectacular time to visit — fewer people (some 3.5 million visit each year, making Yosemite one of the most visited parks in the country) and significantly cheaper rates (http://www.yosemitehikes.com/yosemite-valley/yosemite-valley-hikes.htm). (There’s a lot to do in winter too — tubing, ice skating snowshoeing with a Ranger, cross-country and downhill skiing, snowboarding.) We’re thoroughly psyched after watching the Yosemite episodes of Ken Burns’ new six-part series “The National Parks: Americas Best Idea” (www.pbs.org/nationalparks), which chronicles naturalist John Muirs’ efforts to keep Yosemite intact.

Our tidy two-bedroom/one-bath cabin, complete with wood-burning stove (lots of dry wood outside under a tarp (www.redwoodsinyosemite.com) is near the South entrance of the park and perfect for a rain-swept night. We cook chili and cornbread and play Scrabble and Blokus (www.blokus.com). I loved staying in our own cabin — no people, plenty of room to spread out and cook.

But there are many other options, in the park — from campgrounds to the historic and grand Awhwahnee Hotel (http://www.historic-hotels-lodges.com/ahwahnee-hotel.htm), a designated National Historic landmark — and outside the gates. Check out A Bed of Roses (www.abedofrosesbandb.com) the kid-friendly bed and breakfast 10 miles from the south entrance to the park. Kids love the four potbelly pigs and the pet goat. There’s also Tenaya Lodge (www.tenayalodge.com), which is just a few miles from the south entrance and offers special winter activities and rates. (Ice skating under the stars complete with s’mores and cocoa? Gingerbread house competitions?)

We started our first morning near our cabin at the park’s famous Mariposa Grove of Giant Sequoias, some more than 3,000 years old! The tallest tree in the grove is about 290 feet tall, taller than the Statue of Liberty! One limb of the Grizzly Giant is almost 7 feet wide!

Some 50 yards farther up the trail, we encounter the famous California Tunnel Tree, a tunnel cut through the trunk in 1895 to allow horse-drawn stages to pass through. Today, it’s a must-have photo op.

Yosemite National Park is enormous, about the size of Rhode Island, and it’s a terrific place to teach kids lessons on conservation and preservation. There are some 800 miles of hiking trails and 12 miles of paved bike paths, the junior ranger program (http://www.nps.gov/webranger/), kid-friendly ranger-led programs (twilight stroll anyone?) and the hands-on Pioneer Yosemite History Center at Wawona. Also special family hiking and rock climbing trips, like those run by Southern Yosemite Mountain Guides (www.symg.com), Go Climb a Rock classes from Yosemite Mountaineering School (www.YosemitePark.com) as well as free art classes, photography walks and field science programs from the Yosemite Institute (www.yni.org). For the youngest visitors, there is a “Little Cubs” booklet published by the Yosemite Association for $3 (http://www.yosemitestore.com/cat-18-1-6/Childrens.htm).

“I’ve come here since I was a child but this is my kids’, first visit,” said Jimi Klopson. The Klopson family stayed dry in their tent despite a drenching rainstorm. The kids, of course, thought it was all a great adventure.

We end our visit to Yosemite with a hike at Glacier Point up to Sentinel Dome where we’re treated to an amazing 360-degree view of Yosemite Valley. We’re more than 4,000 feet above the valley floor, looking out at the falls and the rock formations.

As we get ready to leave, Reg congratulates me. “Good job, hiking” she says.

I just smile and remember the time when I was the one handing out the kudos — and the M&M’s.

(For more on Eileen’s Northern California adventure, read her travel diaries on this sitea nd also follow “taking the kids” on www.twitter.com, where Eileen Ogintz welcomes your questions and comments.)