Too hot for you in Pompeii? Try Times Square 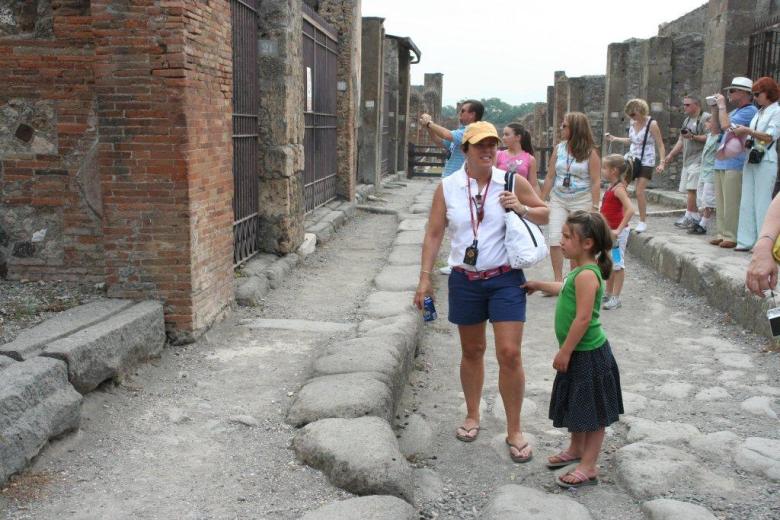 Touring Pompeii from Disney Cruise in 2007

We’re standing in a dusty square trying to conjure up an image of a bustling gathering place with white marble floors, gleaming columns and fashionable people buying and selling wine, beautiful fabrics and exotic treasures — imagine SoHo in New York, I tell the kids. Powerful politicians work just across the way. In our imaginations, there are gorgeous bronze statues everywhere. In reality, all that’s left are a few crumbling columns.

Welcome to Pompeii. The scene we’re trying to visualize would have taken place before 79 AD when the city, according to our guide Fulvio Jesu, was a prosperous community known for its wine and its houses of prostitution. Jesu has been leading tours of Pompeii for nearly 30 years.

It’s never easy making an historic site interesting for kids and casts of human bodies aside, Pompeii is no different. The original Roman streets are uneven. There’s no multimedia presentation, no snack shop in the ancient city— just a guide droning on. Still, I wouldn’t have missed showing this place to the kids for anything because it gave me the chance to see it through new eyes.

Of course if you can’t make it to Italy, you now have an alternative: Discovery Times Square has just premiered “Pompeii The Exhibit – Life and Death in the Shadow of Vesuvius” with Over 250 artifacts – includes some never-before-seen objects and the largest collection of body casts ever on display including a dramatic skeleton collection.  There’s also a new immersive movie experience depicting a time lapsed representation starting from the moment of Vesuvius’ massive explosion. http://www.discoverytsx.com/

Following an earthquake in 62 AD, some of Pompeii had been rebuilt and then, less than two decades later, Mt. Vesuvius, which had been considered extinct and, in fact, was covered with vineyards and homes, erupted so quickly that it buried Pompeii and a nearby city, Herculaneum, in minutes. The “rain of fire” lasted for three days. More than 10,000 people died, their bodies buried beneath 30 feet of molten ash. During our tour, we saw plaster casts of some of the bodies archeologists found. The kids, of course, loved the casts. It was hard to tear them away.

“It’s my first trip to Europe and I want to see all of this stuff,” one North Carolina dad traveling with his wife and two children told me. “It helps that you can dangle a little pool time at the end of the day, then you can keep their attention longer,” he added.

We even had a stroller or two in our group, and it was no easy feat maneuvering them along pathways once navigated by chariots. “Please keep track of your kids,” the guide said. “I’m your guide not your baby sitter.” The crowds were far worse than at a busy day in Disney World, most trailing behind guides who held up signs.

The big stones in the middle of the street are stepping-stones so Pompeii citizens could avoid the water that flooded the roads when it rained. Chariots, apparently, were wide enough to pass over the stepping-stones. One 4-year-old made her way in flip-flops because she couldn’t find one of her sneakers that morning. One boy fell and hit his head on the stones.

Kids may not exactly appreciate what they’re seeing — an entire ancient civilization preserved in volcanic ash, a site that’s been excavated for 250 years and continues to be excavated today. During our tour we watched as archeology students worked on a house. Archaeologists have extricated many objects from the ash — jewelry, bakery ovens, even paintings. They’ve also unearthed public baths, stadiums where gladiators fought and lived, wine shops with tasting rooms and stacks of ancient wine jugs, even a mall with small shops and paintings of fish and chickens. It was intriguing for the parents to see what appealed to the kids most.

They are amazed the Pompeians — at least the wealthy ones — had running water. We learned that wealthy people had vomitoriums in their homes — so when they’d consumed too much, they could throw up and start all over again.

Some of the kids are more enthusiastic than you might think. “I liked all the gladiator stuff,” said 11-year-old Zachary from San Francisco. “It was interesting how they all got buried by the ash.”

“We’re only seeing the highlights,” Jesu said. “You could spend days here.” But an hour and a half is enough for the kids and the adults in the group. “The historic stuff is tough for the kids,” acknowledged a dad from Houston who had his 11-year-old daughter along.

My 13-year-old niece couldn’t wait to leave Pompeii because it was “too hot” — this from a kid who lives in Las Vegas.

“I was tired too,” acknowledged 11-year-old Nancy from Fort Lauderdale. “But it was cool to see stuff from so long ago.”