Touring Herculaneum and Pompeii with a kid who appreciates it 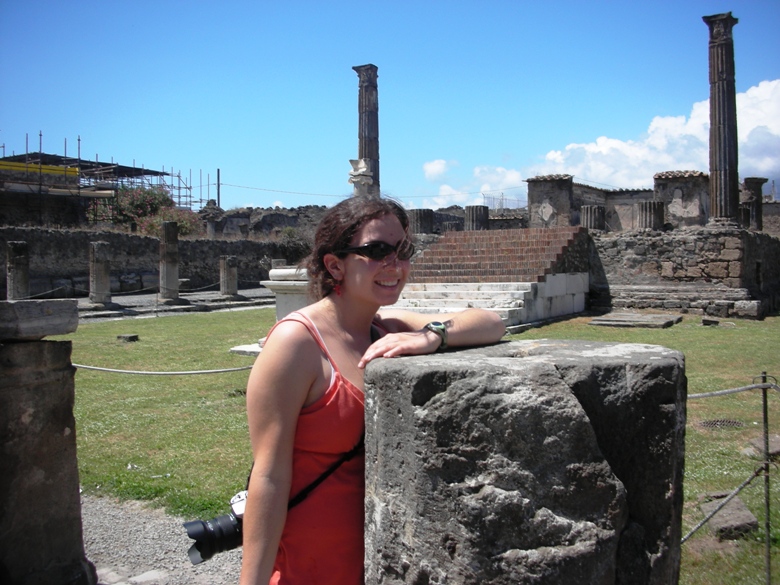 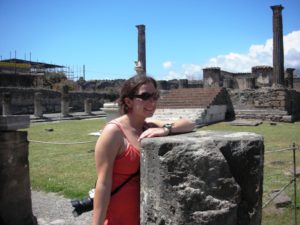 DAY FIVE — Everything stays the same — even after 2000 years.

We’re touring Herculaneum, and then Pompeii, with a wonderful guide, Colona Stefano (www.columntours.com), who not only speaks terrific English but has a wry sense of humor and two young children so he knows how to engage families.

Herculaneum, he explains, was also buried on Aug 24, 79 A.D., when Mt. Vesuvius erupted. But this was a fancy summer resort, not a bustling city like Pompeii. Wealthy patricians vacationed here in villas — kind of like an ancient Hamptons or Newport Beach or Martha’s Vineyard, I guess. Perhaps only 4,000 people lived here.

This city was closer to the volcano than Pompeii and was buried up to 70 feet in boiling mud. In fact, the ancient city was only discovered by accident in 1709 when a prince was enlarging his garden and one of the bricklayers suddenly found himself falling into the ancient town — literally.

Today, Stefano tells us, only about 10 per cent of the town — just 6 acres — have been excavated. We’re impressed with the ingeniousness of the ancient Romans — their sewer systems, their running water, their fast-food restaurants (yes, they had those too! They even had their own version of Worcestershire sauce — garum, made with fish intestines mixed with salt. “They were crazy about it,” Stefano said.

Herculaneum is much smaller than Pompeii and more structures are standing — the mosaics are incredible. There even was a boat recovered from the ancient marina. The bath complex is one of the best preserved from ancient times — complete with the cold water pool, one that’s like a steam shower and a room with tepid water. Just like today, there were separate quarters for men and women.

Yes I know we could have toured on our own and gotten here on our own too, but I’ve got to say I’ve never learned so much or enjoyed a visit to an ancient site as much. Also, our driver Gaetano Caso (casagaetano@libero.it) entertained us the entire way. He also notes that he can arrange private tours (he works with Rita Clemens at www.customizeditaly.com) for cruise ship passengers for a lot less money than the cruise lines. And he guarantees he’ll get you back to the ship in plenty of time “Otherwise, we’d have to take you to the next port,” he jokes.

We’re amazed by the ancient mosaics and signs that have survived. We pass an ancient edict not to litter.

Pompeii, of course, is much larger. It was a city of 25,000 people and was buried not by mud but by volcanic ash 36 feet deep. Only two-thirds of the 161 acres have been excavated and there’s no excavation on now. “We will leave that for the next generation,” Stefano said. “We’re in no hurry.” It’s easy to see why this is the most visited sites in Italy.

We see skeletons — of children and dogs as well as adults — which had been covered by volcanic material and became as hard as stone. The bodies decayed , leaving an empty space inside which an archeologist was able to fill with plaster in the 1800s. We see them where they died, trying to cover their faces.

Last summer, when I was sailing on a Disney Cruise through here with my 13-year-old niece, she was more concerned about how hot she was than the sites. I’m also convinced touring something like Pompeii with a large group tour as opposed to a private guide can make all the difference. Even if it costs more, it’s well worth it — and you can cut the tour short if the kids clearly have had enough.

We stand in the town center (pedestrians only, in ancient times) trying to imagine the temples, the marble, the columns and the bustling markets selling fabrics and wine. Stefano explains that the ancients believed the city was cursed — that was why it took so long to be excavated — until the 1700s, when a farmer started to find marble. We pass warehouses with giant terracotta jugs that were used for wine, olive oil and seeds.

Twenty-five brothels were found — we tour one. Why the stone beds? “The owners didn’t want the customers to get too comfortable,” Stefano explains. He tells us that graffiti was found on the walls, written by the customers.
More than 5,000 inscriptions were found in Pompeii-billboards touting political candidates, girls extolling their love for various gladiators, visitors announcing their presence.
He points to an amazing mosaic at the entrance to a house — a dog chained. “It’s a beware of dog sign, like today,,” Stefano tells us.

He points out some of what’s left-the red on the buildings and we try to imagine Pompeii in ancient times — the marble, the bright blue and red paintings, the gleaming columns. Stefano shows us a family shrine hanging on the wall of one wine shop — just like he has in his apartment today, he explains.

We’re overwhelmed by what we’re seeing.

Stop just outside the entrance at Domus Pompeiana (www.domuspompeiana.it) where you can have a slice of pizza, a gelato, frozen lemonade or see how the region’s famous Limoncello liquor is made as well as watch an artisan make you sandals — in just 10 minutes. There is also beautiful Venetian-glass jewelry. If only the dollar bought more!
We’re hot and dusty and glad to return to the hotel — and the pool.

Later that night, our driver Gaetano offers to send his brother Carlo to take us to Ristorante Bagni Delfino — owned by family friends on the water in Marina Grande (ristorantebagnidelfino.com). Dinner is terrific-I’ve never had such good seafood risotto and again we’re treated to a spectacular view of the sea and the port.
Dinner ends with the region’s drink — Limoncello.