Touring on a bike offers new insights and fun 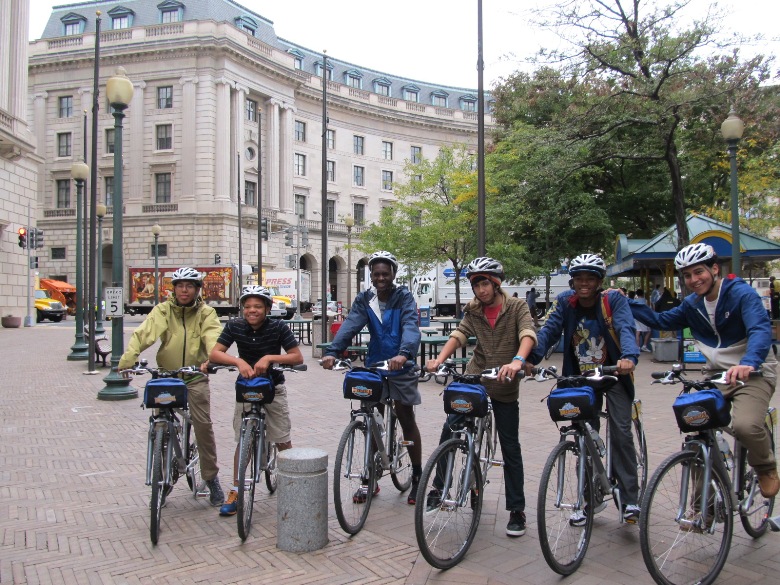 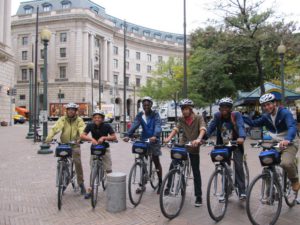 ABC Boys get ready for bike ride on the National Mall

Walking is so 20th century.

Or at least it is when you’re sightseeing with kids or teens who can’t think of anything more boring than walking from monument to church to museum.

So strap on your bike helmet!

That’s what we did recently in Washington, D.C. Rather than walk miles from one end of the famous National Mall to the other to view the famous presidential monuments and war memorials, we biked them with an engaging guide from Bike and Roll Washington, D.C., which also offers tours in other cities, including New York City, San Francisco, Chicago and Miami (think biking over the Brooklyn or Golden Gate Bridges.)

That bike tour ($40 for adults, $30 for kids 12 and under), which offered plenty of photo ops and stops along the way, turned out to be the highlight of the weekend.

I couldn’t think of a better time than just before the presidential election to tour the sites of our nation’s capital with a group of kids. I was chaperoning a group of inner-city high school boys, who live in our suburban town and attend our high school under the auspices of a terrific national program called A Better Chance. My challenge was to inject as much fun into an education-heavy itinerary as possible, especially since some of the boys had visited Washington, D.C., before on middle-school trips.

We stayed in The Capitol Hill Hotel, a suite hotel within walking distance of a lot of major sites. It was easy on the budget, offering free breakfasts and WiFi, and it gave the boys plenty of room to spread out. (We chowed down at Carmine’s D.C., outpost of the famous NYC Italian eatery, where the gargantuan portions are served family style and at Hill Country BBQ where everyone gave a thumbs up to the ribs and live music.

At the boys’ request, we toured the Crime and Punishment Museum and the International Spy Museum. But on the bus ride home (we opted for Bolt Bus from NYC, , which was not only half the price of the train but also offered free WiFi), the boys agreed the bike tour was their hands-down favorite experience.

That made me realize it’s worth checking out a bike tour wherever you are visiting with the kids. You can bike along the new beach promenade in Clearwater, Fla., or sample Portland’s famous local eats on a Bites by Bike tour that claims it is the best in the country for cyclists, offering an extensive network of trails.

Ride beneath giant cottonwood trees along the Rio Grande in Albuquerque, N.M., with Routes Rentals and Tours taking in views of the Sandia Mountains and connecting with some of the city’s top attractions, including the zoo, aquarium and more.

Tour Gettysburg’s 6,000-acre battlefield by bike or Paris’ famous sites. Katie Myers emailed me from Atlanta: “Our tour guide was fun, passionate and knowledgeable and was English speaking and only cost $20 per person.”

Ride a van up Colorado’s famous Pikes Peak and bike down with kids that are at least 4-feet-6-inches tall. When we were in Maui, the kids didn’t complain about getting up well before dawn to watch the sunrise from the top of the Haleakala volcano before biking down.

Explore Boston’s neighborhoods, from the Italian North End and historic Beacon Hill, up to Fenway Park, and through Back Bay.

There are even some bike tours that are geared toward younger kids. Explore downtown Little Rock, Ark., on a special Sunday family tour with Bobby’s Bike Hike. On our Washington, D.C., tour, there are bikes for children 4-feet-6-inches and taller while toddlers and smaller children ride behind a parent in trailer carriers or on trailer tandems that attach to adult bikes. Unlike many tours I’ve been on with kids, this one seems to satisfy all ages. “You really get to see a lot,” said 9-year-old Georgia Kulp, on our tour with her dad. Our high-schoolers were equally engaged.

Sure we had to dodge tourists and strollers along the way, but our guide, Young Cho, led the way and we saw a lot more — and had a lot more fun — than we would have otherwise.

Everyone had a favorite memorial, too. The two high school freshman voted for the 555-feet-plus Washington Monument, still closed for repairs following the 2011 earthquake. One of the juniors liked the World War II Memorial, especially the famous “Kilroy was here” graffiti, familiar to every veteran of the Second World War.

One of the chaperones voted for the Franklin Delano Roosevelt memorial, which includes a rare statue of the president in his wheelchair, as well as one of his dog Fala.

The 11 year old along with our group loved the 21-foot-high bronze Einstein Memorial because you could climb up on Einstein’s lap. (Legend has it that if you rub Einstein’s nose, some of his intelligence will rub off on you!) Everyone, of course, had to pose for a picture rubbing Einstein’s nose.

Sure we could have rented bikes on our own for significantly less but not only would we have struggled to navigate the crowds but we would have missed the commentary our guide offered at each stop. (Was Abraham Lincoln really “signing” liberty in sign language? The sculptor, our guide noted, had a deaf son.)

It was that rare sightseeing tour with kids that we were sorry to see end.

“Much more fun than walking,” declared 8-year-old Willy Mondress when our tour came to an end.

He was absolutely right.