Touring the Largest and Newest Legoland in the World 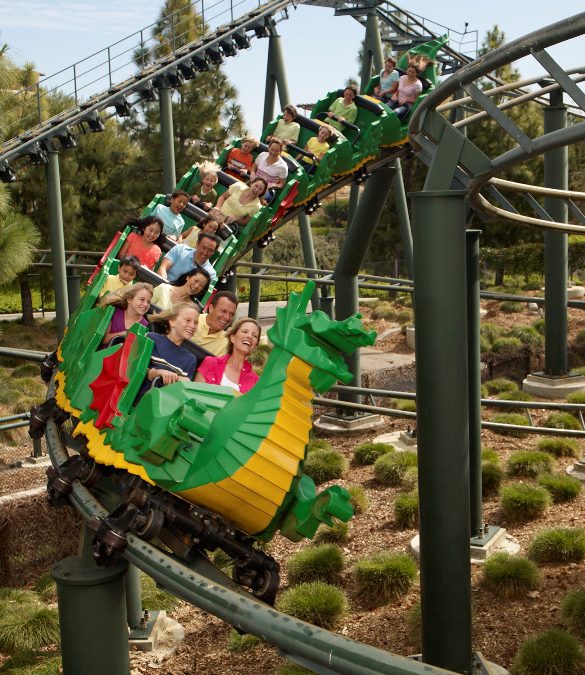 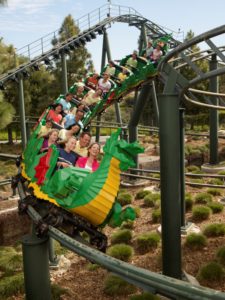 The Dragon Coaster at LEGOLAND Florida

Kids fish from the Pensacola Beach Gulf Pier while hip adults sun themselves in South Beach, including one who is bright red from too much sun. There are seagulls and crabs, beach bikes and mini-golf, a historic Florida fort, Miami’s Little Havana and the State Capitol in Tallahassee, the Daytona International Speedway, the Kennedy Space Center and even a mermaid.

Welcome to Florida and the brand-new LEGOLAND Florida, the largest LEGOLAND in the world, set to open Saturday, Oct. 15 in Winterhaven (45 minutes west of Orlando and a 45-minute drive east from Tampa) on property that once housed Cypress Gardens. The entire state of Florida made out of LEGO bricks. It’s the centerpiece of the park’s Miniland USA that took 20 million LEGO bricks to complete.

Walk down the Las Vegas strip complete with mini wedding chapels and real Vegas sounds, see the Obamas and their dog standing in front of the White House, watch the yellow taxis navigate Times Square or survey San Francisco’s famous Golden Gate Bridge — all built from LEGO bricks. Let’s not forget what’s sure to be the biggest crowd-pleaser — pirates, an entire pirate village (yes, there is a battle going on, complete with some hapless fellows who’ve already fallen prey to the hangman’s noose.)

Not only are you and your kids guaranteed to see something new every time you walk through here, but what separates LEGOLAND Florida from others is that throughout the entire 150-acre park you and your kids make things happen at each of the rides and attractions.

“This isn’t passive entertainment,” promises Bill Vollbrecht, the LEGOLAND Parks designer who walked me through just before opening. “Kids aren’t just being entertained here. They are part of the process.”

Think racing LEGO brick cars at the Daytona International Speedway, building a LEGO car you can test on a digitally-themed track in the Imagination Zone. Toddlers can join the Junior Fire Brigade and extinguish “flames,” get up close and personal with DUPLO farm animals and take over a mini town built just for them.

Preschoolers captain their own mini boats and drive cars while entire families compete with one another in fire and police vehicles to put out a “fire” or catch “robbers” at the LEGO City Rescue Academy. There’s even an AQUAZONE Wave Racers ride where riders zip in and out of waves while dodging kid-powered water blasters.

Ride through the Safari Trek where a life-sized LEGO lion will roar, an elephant will spray water and a hippo will open his mouth wide.

(Fall is a great time to visit Orlando with cooler temperatures, fewer crowds and better hotel deals, not to mention Halloween fun. For example, the Wyndham Grand Orlando Resort Bonnet Creek — Orlando’s newest luxury resort — just opened and is offering grand opening rates starting at $119, as long as you book by Oct. 25 for travel through Christmas.

Check Visit Orlando for more offers. One-day tickets to LEGOLAND are $75 for adults and $65 for kids ages 3 to 12. If you think you’ll come more than once, opt for an annual pass. It’s a bargain at $129 for adults and $99 for kids plus tax, with other more expensive annual passes offering free parking and other discounts.)

At LEGOLAND, The beautiful cypress trees and botanical gardens — including the immense and signature banyan tree planted as a seedling in 1939 — have been preserved, with some 660 trees replanted and tons of concrete reused. Some of Cypress Garden’s attractions have also been repurposed in the new park, including the signature water ski show on Lake Eloise that premieres as the Pirates’ Cove water stunt show at Pirates’ Cove. Here, guests are invited to become part of the action (think shooting water cannons).

Any parent of a middle-schooler, meanwhile, knows that LEGOS have become cool again and LEGOLAND Florida won’t disappoint that crowd either — not with Imagination Zone that emphasizes creativity. (The entrance includes a LEGO replica of Albert Einstein’s head.) Here you’ll get the chance to build MINDSTORMS robots, build a theme park ride using gears to alter speed or go on a mission to “save lives” with “Dr. Heartbeat” and other NXT-bots by using a computer, sensors and motors.

In fact, there are seven educational programs incorporating science, technology and math that meet Florida’s Next Generation Sunshine State Standards. (Any parent can download the education program at www.legoland.com.)

Kids might also learn a lesson about eating healthier, too. Great efforts have been made by Executive Chef Robert Sit to provide fresher more innovative options, many of which come from local producers. Kids will get fruit, milk or water with their meals, salads and stir-fry dishes will be prepared as you watch and there will be rotisserie chicken, yogurt-granola parfaits and even roasted salmon — all for under $10, considerably less for kids. “I think people will be pleasantly surprised,” says Chef Sit.

There’s also the largest LEGO store in the world, the chance to make a tiny LEGO person who looks like you and even an opportunity to introduce your kids to their first “thrill” ride with four junior coasters, including the Dragon Coaster in the park’s LEGO Kingdoms Zone, behind the scenes in the enchanted castle and the Coastersaurus, a wooden coaster that winds its way around a life-sized LEGO brick dinosaur. (Parents and grandparents who visited Cypress Gardens as kids may remember the wooden coaster as the Triple Hurricane.)

“If we make a coaster young kids can’t ride, we’ve failed,” said Vollbrecht, adding the entire park is designed to be completely accessible for those with special challenges.

“The LEGO models here show what’s possible to do with LEGO bricks,” he says. “Kids will recognize pieces they have at home and start thinking what they could build themselves.”

Moms and dads too.