Touring the Sites of Rememberance of the Holocaust in Berlin 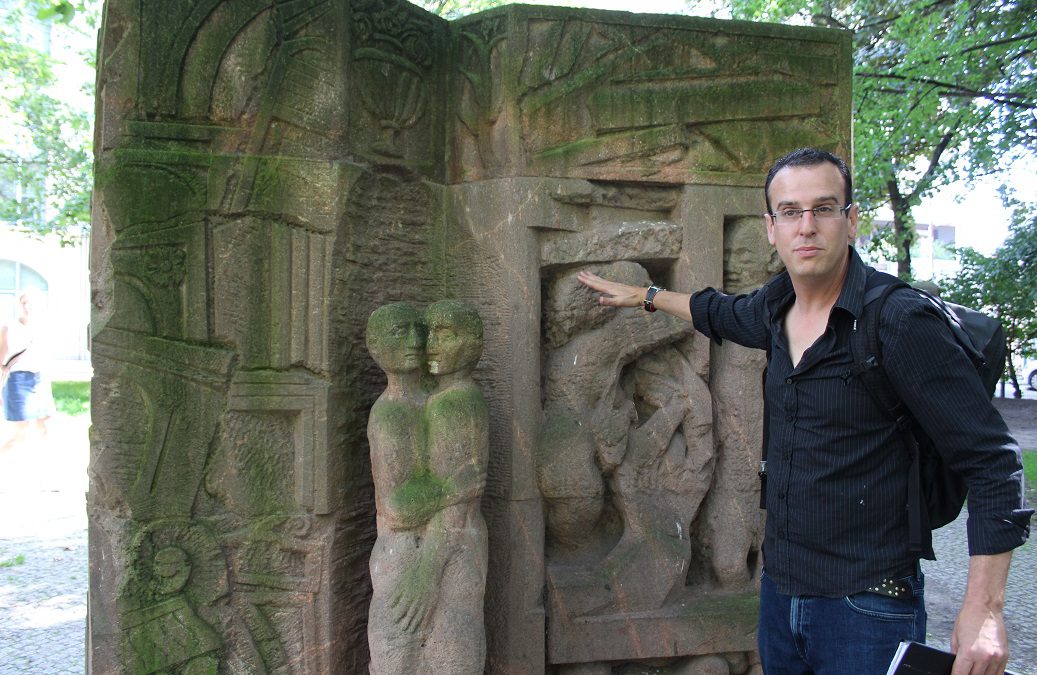 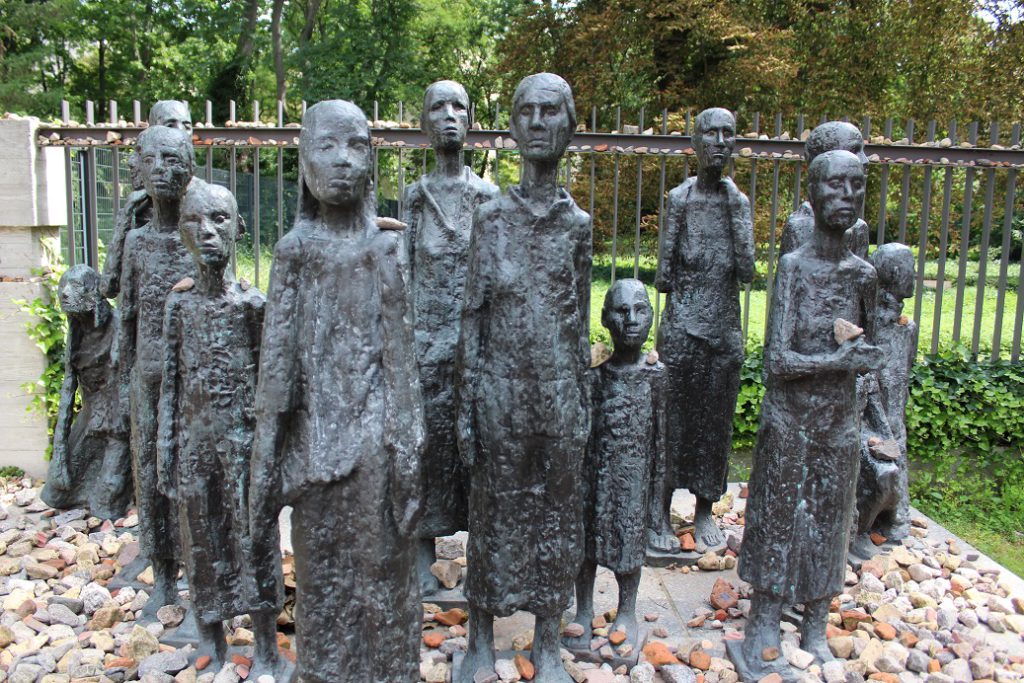 If Alice Licht were still alive, she would tell you that. As a young Jewish woman in Nazi Berlin in the 1930s, she didn’t have many career options, though she had once aspired to be a doctor. She was forced to work at a parachute silk factory. After feigning an ulcer, a man named Otto Weidt gave her a job as a secretary in his small broom and brush factory.

Weidt, nearly blind and not Jewish, would turn out to be her savior—and that of other Jews and their families who worked for him. He hid Licht and her parents for eight months in 1943 in a stockroom in his workshop—today a museum that is part of the Berlin Sites of Remembrance, memorial sites, documentation centers and small museums that tell stories of those who lived and died during the Holocaust.

When Licht and her parents were found and arrested by the Gestapo and sent to the Theresienstadt concentration camp in November, 1943, she kept in touch with Weidt through coded postcards. (Theresiendstadt was the Nazi’s “show” ghetto with the horrors hidden behind a façade of normalcy; thus those who “lived” here could send postcards home, albeit heavily censored.)

Six months later, Licht and her parents, like many others at Theresiendstadt, were sent to Auschwitz.  On the unbearably crowded train there, Licht somehow threw her last postcard out with no postage, addressed to Weidt, telling him where she was going.  Incredibly, the card found its way to him.

He didn’t give up on his young secretary. He went to Auschwitz, ostensibly to sell the camp his brushes and brooms, only to learn Licht was at a subsidiary camp. He managed to get her a message that he had left clothes, medicines and money at an apartment nearby. She escaped and celebrated the end of the war with Weidt before immigrating to America and living until 1987.

What makes a man like Weidt do what he did? “There were many unsung heroes,” said Nadav Jakobovitch, our Tours by Locals guide on our second day in Berlin. He comes from a family of Holocaust survivors by way of Israel and now lives in Berlin and seemed uniquely qualified to show us some of these Sites of Remembrance, 1933-1945.

Of 560,00 Jews in Germany before Hitler came to power, he said, there are only 20,000 left. These sites, he said, were created in the 1990s as a way for Germans to remember the National Socialist reign of terror, document its history and commemorate the victims at the actual historical locations where the events occurred. 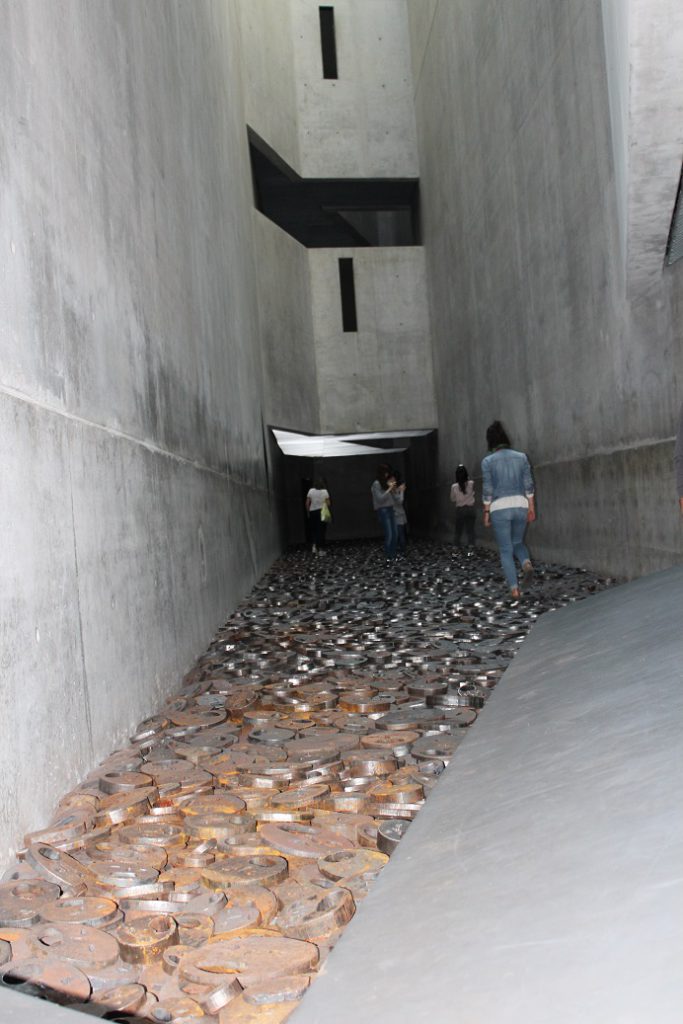 The Fallen Leaves exhibit inside the Jewish Museum of Berlin

At the Jewish Museum in the central city area and one of the largest Jewish Museums in Europe, architect Daniel Libeskind, who designed One World Trade Center in New York City, designed the two modern buildings with “Voids” — empty spaces that slice through the building and represent what can’t be exhibited because of the erasure of so many Jewish lives in Berlin. There is a haunting sculpture by Israeli Artist Menashe Kadishman called “Fallen Leaves” with over 10,000 metal faces covering the floor that you walk over—they clank as you do—a testament, the artist said, to all innocent victims of war and violence.

Our hotel, the Sofitel on Gendarmenmarkt Square in central Berlin, is convenient to explore all of Berlin’s sites, whether museum island, the remnants of the Berlin Wall or the Holocaust remembrance sites.

These places are free and public, a way to put faces to what happened and hopefully to advance a more tolerant and democratic society.

Near Otto Weidt’s workshop on Rosenthaler StraBe is a small Anne Frank exhibit, a partnership with the Anne Frank House in Amsterdam. Frank was born in Frankfurt, her family only immigrating to Amsterdam after Kristallnacht–“The Night of the Broken Glass.” On Nov. 9, 1938, paramilitary forces and German civilians destroyed Jewish-owned stores, buildings and over 1,000 synagogues, killing hundreds in the process and arresting thousands of Jewish men. The name comes from the broken glass that littered the streets afterward.

Today school children come to the Anne Frank house where there are interviews with her father who survived, as well as interviews with young Berliners talking about what happened—and asking how it was possible. 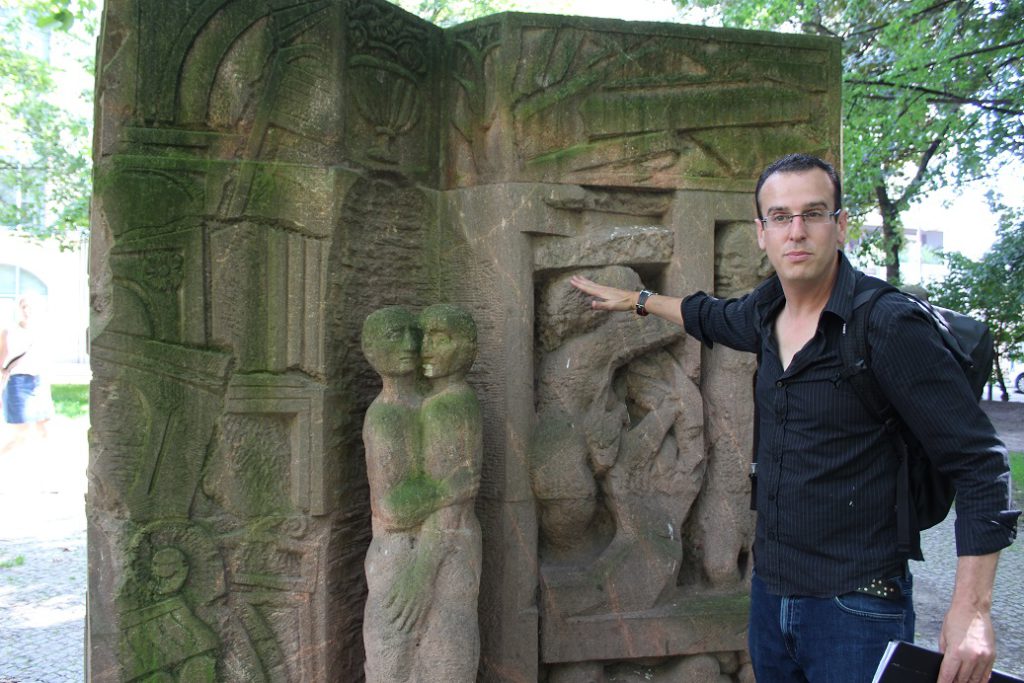 We pause at the memorial “Block der Frauen,” the where many of the women on RosenstraBe, near Alexanderplatz , were a group of Aryans married to Jewish men who were being used as force labor by the Nazis. The men had just been ordered to the death camps. The women protested for days in the freezing weather, managing to save their Jewish husbands who were being held across the street. It was the only continuous street demonstration by Germans against the deportation of the Jews.

At the time, there were some 30,000 intermarried couples in Germany and most refused to divorce. These women showed publically they loved their Jewish spouses and were willing to die for them—there were machine guns aimed at them. The Nazis, who had just lost a million men in the horrific battle of Stalingrad, backed down. At some points, our guide said, there were thousands of street protesters. The nearly 2000 men were release and most survived the war.

The sculpture, created by East German Ingeborg Hunzinger, shows protesting women and women reaching for their men. The inscription in German reads “The strength of civil disobedience, the vigor of love overcomes the violence of dictatorship.” 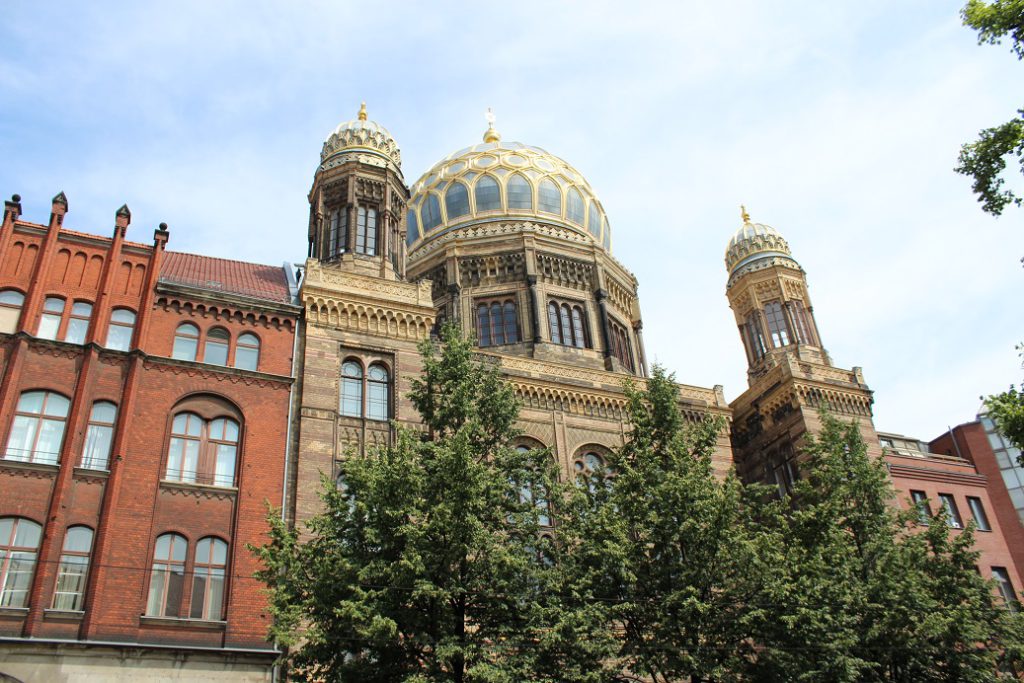 The Fallen Leaves exhibit inside the Jewish Museum of Berlin

Later, we stand at the building—once a Jewish senior center—from which most of Berlin’s Jews were deported—some 55,000 men, women and children. There is also a memorial to the women sent to Ravensbruck, where Nazis used them as human guinea pigs in horrible medical experiments.

Standing there, we can’t hope but wonder if more Germans like those wives had stood up and protested. What would we have done?