Touring the Vatican with kids – hidden gems to explore 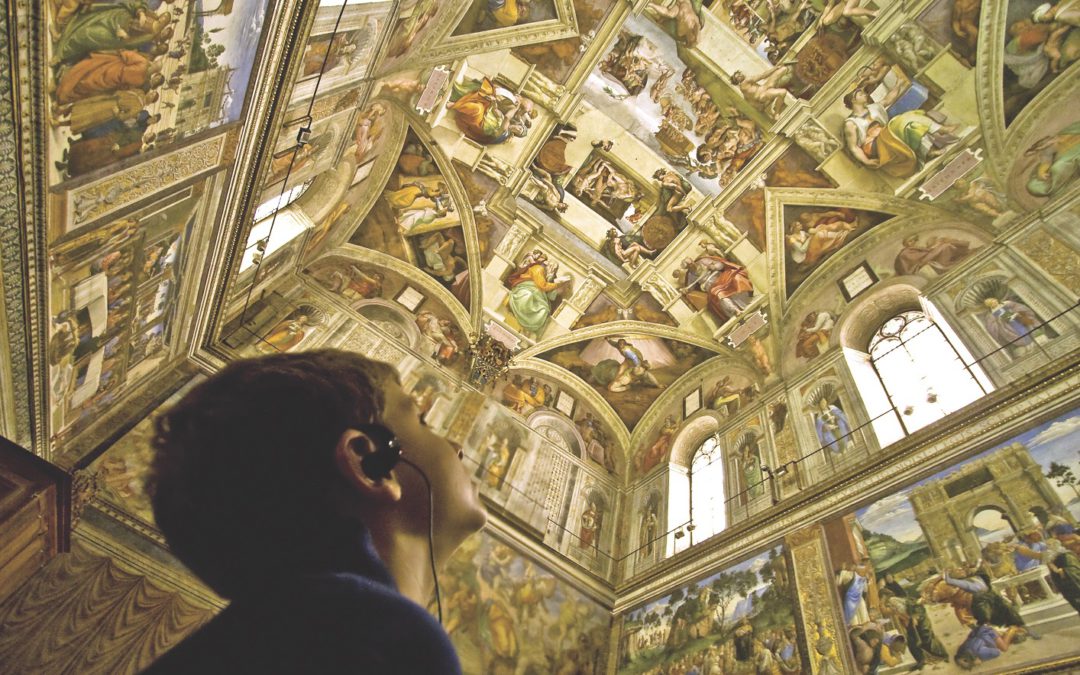 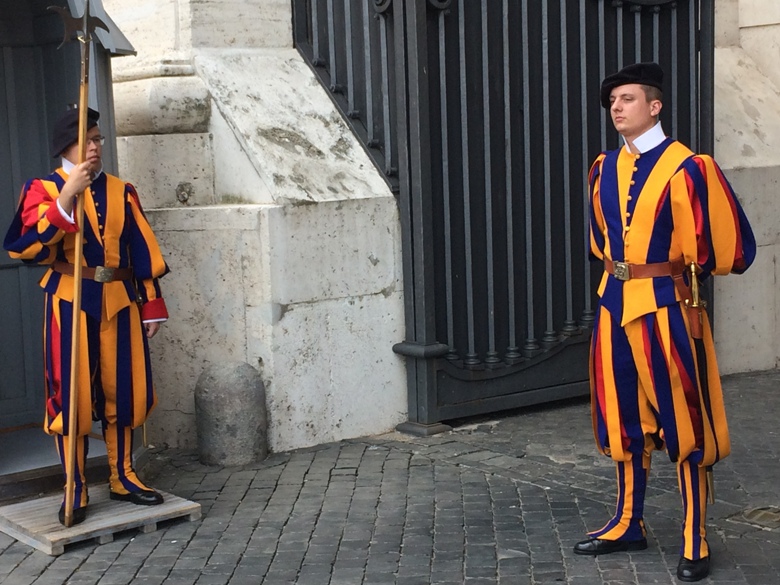 Swiss Guards at the Vatican

Post a picture of the kids standing in two countries — at the same time.

Welcome to The Vatican, the world’s smallest sovereign state, established in 1929. It’s the modern version of the papal fiefdom that ruled Rome and much of central Italy before Italy was unified in the mid-19th century. Incidentally, the pope also has authority over 28 other sites in and around Rome — another fun fact that may (or may not) interest kids.

It’s also one of Italy’s top tourist attractions. Millions of tourists from around the world visit every year. No matter what your religion, every tourist coming to Rome wants to (or thinks they must) visit the Vatican Museums to marvel at Michelangelo’s Sistine Chapel, his Pieta with the remarkably young face (far too young to be a mother) and stand in St. Peter’s Basilica, the largest church in the world. There are more than a 1,000 years of treasures!

But the crowds can be worse than on the New York subway in rush hour, which inevitably makes touring with kids exceedingly difficult. What if they get away from you? (Always have a meeting place! And remind them they can always seek help from someone in uniform. If they are old enough, it helps to have your smartphones enabled so that in an emergency they can call or text you, even if there is no Wi-Fi.

A tip: Don’t visit on Monday or Saturday — the busiest days. It is much quieter on Friday evening when the museums are open through October (but not in August), suggests Eva Polino, an art historian and licensed guide, who developed a treasure hunt just for the young guests on Abercrombie & Kent’s popular family tours to Italy.

This is when it’s worth hiring a private, kid-oriented guide to help you navigate or opt for a small family-oriented tour — and skip the lines, if you can afford it. (A tour for four, including the skip-the-line museum tickets will run you about $350 for four from ToursbyLocals. Nancy Aiello Tours also offer family-specific tours to the Vatican and other sites in Rome.) 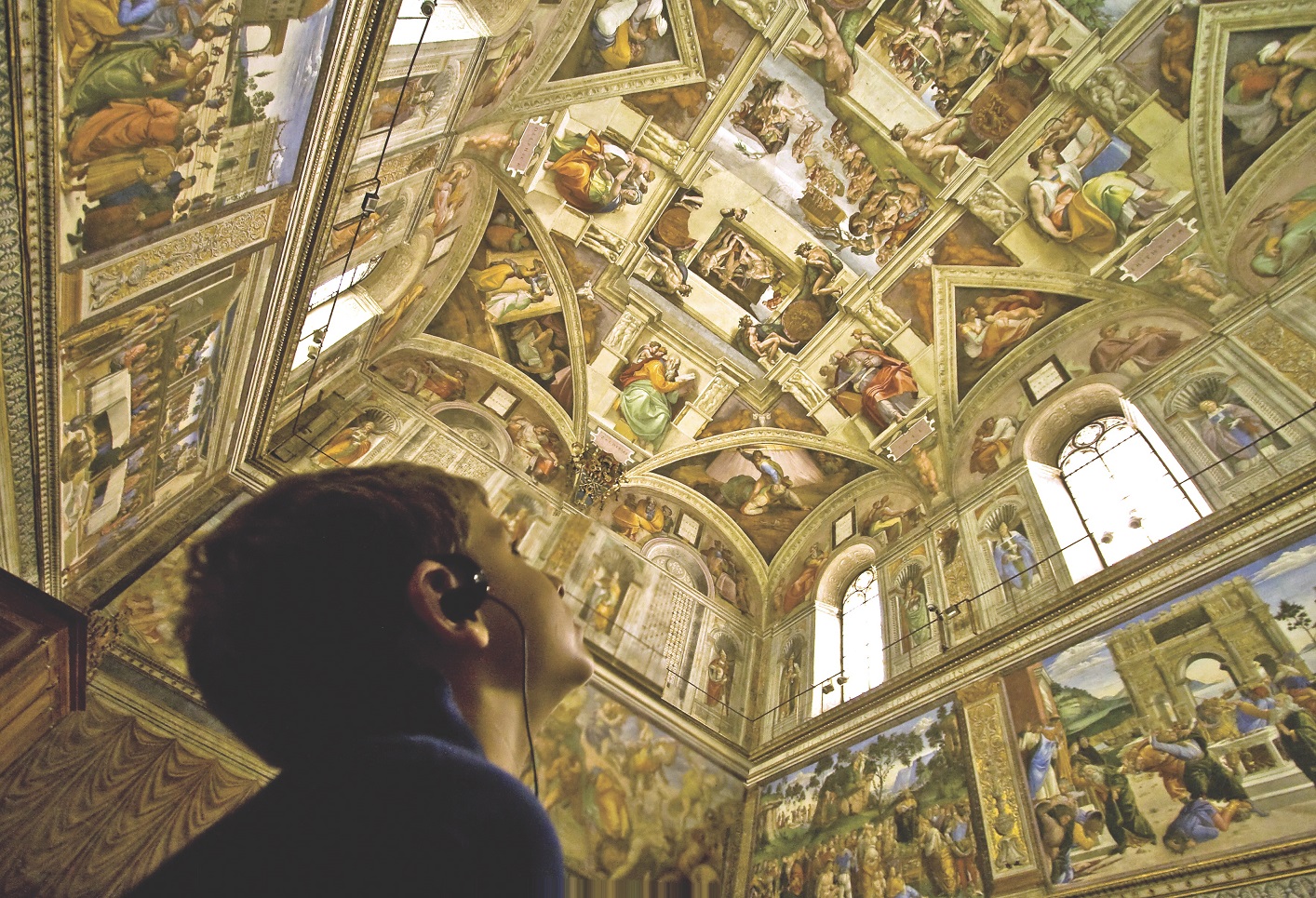 “The goal is having fun,” said Polino, whether you craft a tour yourself or take a guided one for families. “Otherwise, the kids just get lost in the crowd of tourists and the guide isn’t paying attention to them,” she explained. That was the experience of some of my fellow cruisers with kids sailing aboard Carnival’s Vista in the Mediterranean. “It was crazy,” one dad said. “We couldn’t wait to get out of there.” (And for a family aboard a cruise ship, it may prove cost- and time-efficient to book a private tour rather than be stuck in a large group all day where you can only move as fast as the slowest person.

Thus the scavenger hunt. How many different popes’ crests can you find? Polino hands each kid a sheet that has pictures of 15 different ones. These papal symbols, she explains, tell us which pope did what in the galleries and St. Peter’s Basilica. Just like stadiums today, popes wanted naming rights on what they built. Which pope’s crests do you see the most? He clearly got the most shout-outs!

Pope Francis’ shield is Blue with the papal keys and a star, which is the ancient symbol of the Virgin Mary. His motto in Latin means “Lowly but Chosen.”

What was the huge pinecone in the Belvedere courtyard used for? (A fountain!) “The idea is to get them to look at things,” she explains.

However you opt to tour the Vatican, it can help to take a virtual tour with the kids before you visit and decide which of the galleries you most want to visit. Everyone loves the gallery of the huge, colorful geographical maps, for example. Polino points out how detailed they were — after all no one had GPS then. Hunt for sea monsters, winged lions, dragons, bees, elephants. “The kids end up competing with each other,” she explains.

The Vatican Museums have put together a special family tour with mysteries to be solved and riddles to be deciphered, complete with a color illustrated map and special audio guide. (Cost is 5 euros — about $4.50 USD per headset.) Pick up The Family Tour Kit at the Antenna International Desk in the “Court of the Corazze.

Some family group tours, like Adventures by Disney and Tauck Bridges, invite family guests to experience the Vatican Museums after-hours when the crowds have thinned considerably.

Kids are definitely intrigued by the Swiss Guards in their distinctive uniforms. Why are they Swiss? Kids always ask that question. Because when the pope first hired them as his private guards in the early 1600s, the Swiss were among the best soldiers in Europe, Polino explained. Today it is a prestigious assignment for Swiss soldiers, as long as they are unmarried, speak four languages and, of course, are Catholic.

The Vatican Museums have one of the greatest art collections in the world — everything from ancient mummies and Etruscan bronzes, statues, busts, spectacular frescoes by Raphael and, of course, the Sistine Chapel — the ceiling took Michelangelo four years to complete, the wall frescos seven years. It’s impossible to even scratch the surface in a few hours, especially in a crowd, but it’s possible to spark kids’ interest in art and history.

Said Polino, “It’s a glimpse into the past that isn’t there anymore … this art was made to tell a story to people who didn’t read and write so they could understand … if they could understand, so could we … and so could kids.” Stop at the replica of the Laocoon statue and later, when you see the real one, note the difference. (His private parts are covered by a leaf!) Kids, Polino says, aren’t fazed by all of the nudity, though some of their parents are. She asks them if they would go to the gym naked. In ancient Rome, she explains, athletes were very proud of their bodies and competed naked.

In the “Zoo of Stone,” kids look for animals — real ones and those that were the product of a sculptor’s imagination. They count the stone candelabra in the Gallery of Candelabra and hunt for the one statue with “real” painted eyes.

Ask kids what the athlete Apoxyomenos is doing in his statue. (Actually exfoliating — athletes would scrape off oil used to anoint their bodies before competition with sand; they would sell the sand/oil to women who thought it would prevent wrinkles! Who knew?)

In the Tapestry Gallery, kids hunt for bees and other animals and find the tapestry where Jesus seems to be following you.

Even the adults join the fun! Everyone really comes here to the Sistine Chapel. What kids want to know — how did Michelangelo paint the ceiling? (Standing on a scaffold with his arm raised.) It’s important to make kids understand that Michelangelo was a real person who got angry (often at the pope for not paying him in a timely manner), who was a perfectionist and changed his mind and a person who was passionate about his work. How did he make his lines straight (hanging string anchored with nails).

She tells the story of the unfortunate Cardinal Biagio, who criticized his work to the pope: Michelangelo painted him as the judge in Hell in the Last Judgment clearly recognizable to all who knew him. Many saints were tortured — there’s one depicted who was skinned alive, another holding on to the arrows. (Creepy, but kids think it’s cool!)

Look at a book together or the Vatican website before you visit, Polino suggests, so the kids will have a sense of what they are looking at. For example, Christ passed on to St. Peter the divine right to keep tabs on earth and its people when he turns the keys over to Peter, the first pope. Where do you see that story told?

In St. Peter’s Basilica, of course, is Michelangelo’s Pieta — a masterpiece he sculpted at the age of 19. Notice the face of Mary, Polino tells the kids — she looks like a young teen herself. And because Michelangelo was so young, many didn’t believe the work was his, she tells the kids. So he put his name on Mary’s belt for everyone to see.

They also like seeing the dead popes in their clear glass coffins preserved as when they lived. Which statue has a shiny foot? (Peter — and if you can, touch it; it supposedly brings good luck.)

Kids can’t help but be impressed by the sheer size of the Basilica and the grandeur. So much gold! So much marble! Ready to climb the dome? You can make it in 551 steps! Just follow the kids!