Touring Universal Orlando like a VIP with a guide 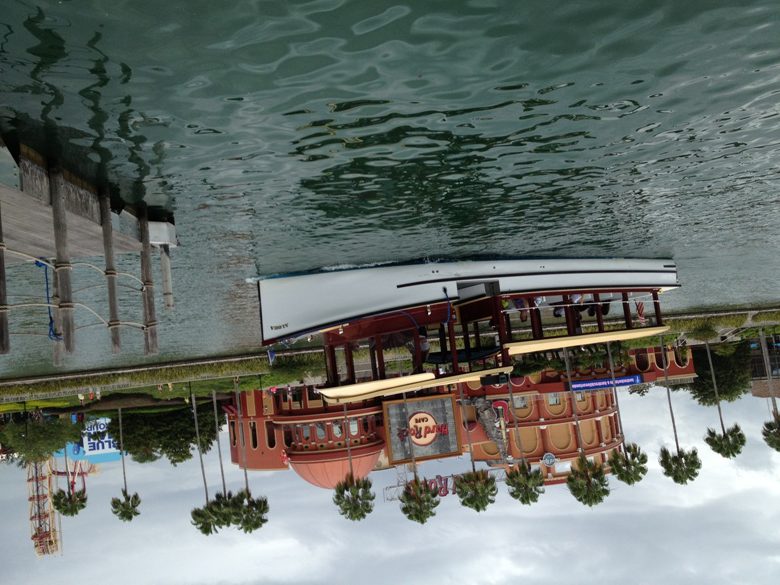 Water taxi from Loews to the parks

That might not matter most places, but in Orlando—today at Universal Orlando Resort—that means she’s tall enough to ride most of the “big” rides that she was too small for the last time her family visited two years ago.

But there’s nothing like having more choices – and bragging rights.  “Now I get to pick what I want to ride,” said Hannah, who affirmed that some rides –like the mega coaster HULK are “too scary.” First on Hannah’s A-list of course was Harry Potter and the Forbidden Journey—which even after three years has some of the longest wait times in the parks, well over an hour.

Because we’re staying on property at the wonderful Loews Portofino Bay Hotel, just a short water taxi ride from both parks and CityWalk shopping and entertainment area, we could have entered the park an hour before opening to avoid the mad crush. (Our room key also would get us front of the line access to most of the parks’ attractions, but not Forbidden Journey.)

But I had another ace up my sleeve.  We’d arranged a VIP tour guide for part of the day.  He not only could whisk us to the front of every line and into Ollivander’s wand shop where people were also waiting an hour. “Never put a wand in your back pocket!” we were advised.)  But our guide could lead the way, taking us through the park in a way that we would maximize our time, answering the most arcane questions, knowing where the bathrooms were and having ponchos on hand for the water rides.  “You just have to get to me and then you can coast,” said our guide Mark, who has been doing VIP tours for more than a decade.  “We can get you into everything and you won’t feel like you are rushed.”  He even made a lunch reservation for us at Confisco in Islands of Adventure where incidentally we got a 15 per cent discount because we were doing the VIP tour.  (There are discounts on merchandise too.)

We were able to take our time in Hogwarts’s Castle, pausing in the Portrait Room as the founders of the school –or their portraits—conversed with one another.  “The next wizard could be right in this room right now unaware of his hidden powers,” one of them said.  We listened as the “Fat Lady” –her portrait—admonished us for not knowing our password.  The best part: When it came time to go on the Forbidden Journey which is not recommended for those prone to motion sickness (like me and Hannah’s mom),  Mark rode the ride with her.

Hannah measures herself for another ride

“Scary but awesome!” she declared afterward.  He also rode with her on The Amazing Adventures of Spider-Man.

Mark was able to tell us which wand in the shop was correct for Hannah’s birthday and for her brother.  Had she wanted to see any of the Universal characters like Shrek, Spider-Man or SpongeBob SquarePants, Mark could have led us there at the appointed times.  He knew exactly when all the shows started, like Animal Actors on Location, and Universal Orlando’s Horror Make-Up Show in Universal Studios Florida were scheduled and how long they lasted.

Talk about taking stress out of the theme park experience!   He’ll even meet guests at their hotel. (There are a variety of VIP options Call 407-363-8295 or visit  www.universalorlando.com;  Disney also has such VIP service).  The parks really don’t advertise the service because there is so much repeat business and word  of mouth. If you can’t afford a VIP guide, he suggests, invest in Express Passes that at least let you go to the front of most lines.  And if you are going to splurge on the VIP tour, he adds, get on the phone to discuss what you want so you can customize your experience.  “You will get most out of the amount of time you have in the parks,” he promised.

We did without racing from one attraction to roller coaster.  Did I mention the chance to ride some attractions twice? Hannah and her mom  rode the Flight of the Hippogriff twice and changed into  bathing suits and flip flops for water rides—Jurassic Park River Adventure and  Dudley Do-Right’s Ripshaw Falls, which they also rode twice, getting soaked.  (They took a pass on the park’s third water ride: Popeye & Pluto’s Bilge-Rat Barges.)

“So fun especially on a hot day,” Hannah said, noting that it is a good idea to have a bathing suit and flip flops in your backpack if you are planning to hit the water rides. “But you dry off pretty quick when it’s hot,” as it was the day we visited.

The Jurassic Park one was her favorite “because a dinosaur was about to eat you but he didn’t! “

She also gave a thumbs up to Revenge of the Mummy so much in  Universal Studios Florida that she rode that twice too.

At the Disney parks, she headed straight for Test Track in Epcot and Space Mountain in Magic Kingdom.  Thanks to FastPasses, she rode Big Thunder Railroad three times and Splash Mountain. Tower of Terror at Hollywood Studios, of course is on her A list before she goes home.

But that’s not to say the kids rides have totally lost their appeal.  Hannah still enjoyed the Cat in the Hat ride in Seussville in Universal’s Islands of Adventure that is appropriate for preschoolers and last night, rode Woody Woodpecker’s Nuthouse Coaster in Universal Studios Florida twice.  The ride is a centerpiece of the Woody Woodpecker’s Kidzone designed for younger children as well as the classic E.T Advenventure based on the movie that was made more than 30 years ago..

“Even when you’re a big kid,” she said. “The kids rides are still fun.