Touristy at the Top of Europe? That’s Just Fine 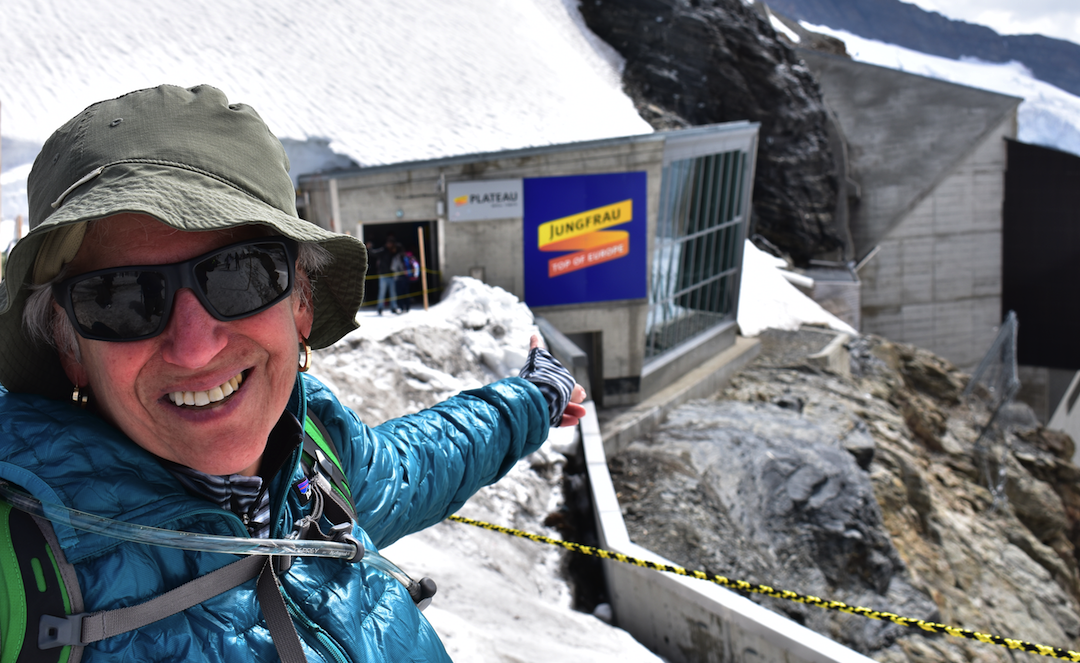 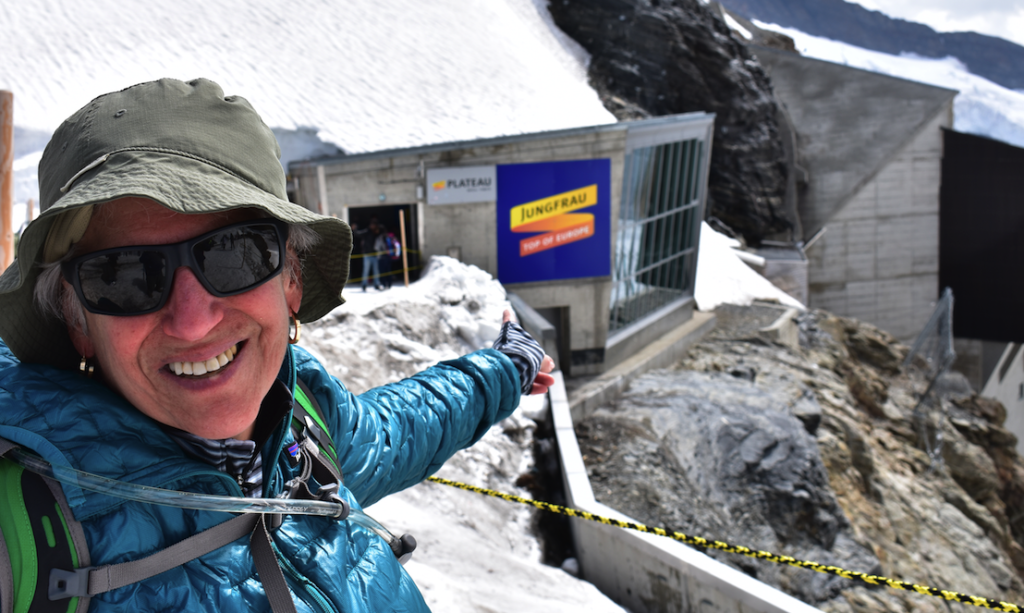 At the Top of Europe

You know the type—the ones who haughtily steer clear of any commercial tourist attraction, whether Disney World, riding a gondola in Venice or venturing to the T

op of Europe on the Jungfrau Railwayin Switzerland — arguably the most popular and expensive mountain railway excursion in Europe.

Too expensive (over $100, even with the Swiss Rail half fair ticket) they’d argue.  Too many tourists!

But there is something to be said about being on equal ground with tourists from all over the world—China, Japan, India, Europe and North America. 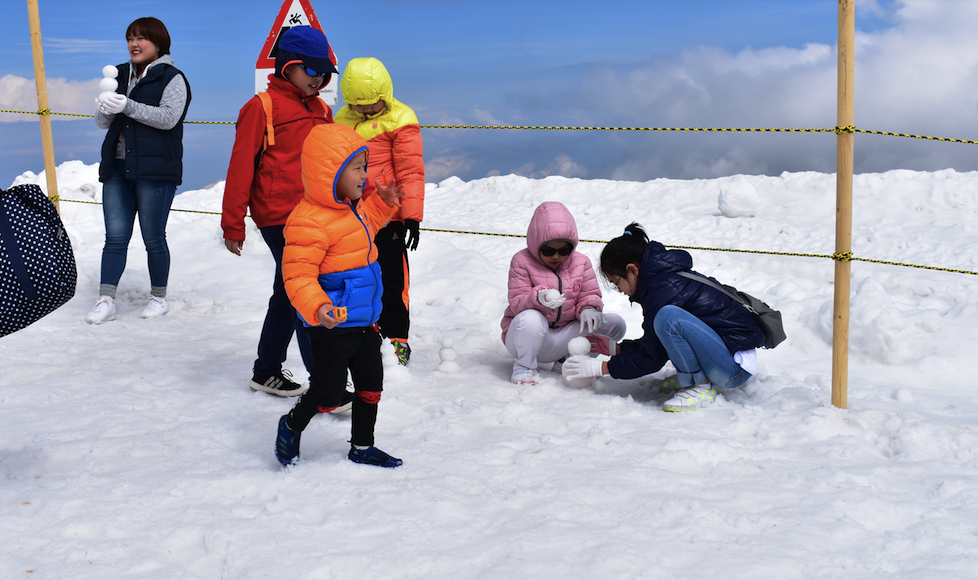 Children of all nationalities playing in snow at Top of Europe

And there is a reason everyone is flocking here—the chance to take a modern cog-wheel train through century-old tunnels of the Eiger and Monch mountains. Construction began in July 1896 and Europe’s highest-altitude railway opened in August 1912 after double the initial estimated cost and loss of many tunnel workers’ lives. The train stops in the middle of one of the tunnels to allow passengers five minutes to gawk out of several “windows” over the glaciers up in the high peaks of the Jungfrau region.

At the top of the Jungfrau there is a huge complex with The Sphinx Terrace offering views into neighboring Germany, France and Italy. There is the Ice Palace—walk inside a glacier past ice sculptures of dogs, bears, penguins, igloos. A plush Scrat, the famous squirrel from Disney’s Ice Age is encased in ice. There are plenty of opportunities for selfies on the Ice Plaza and the chance to walk across the snow field on the Glacier walk. 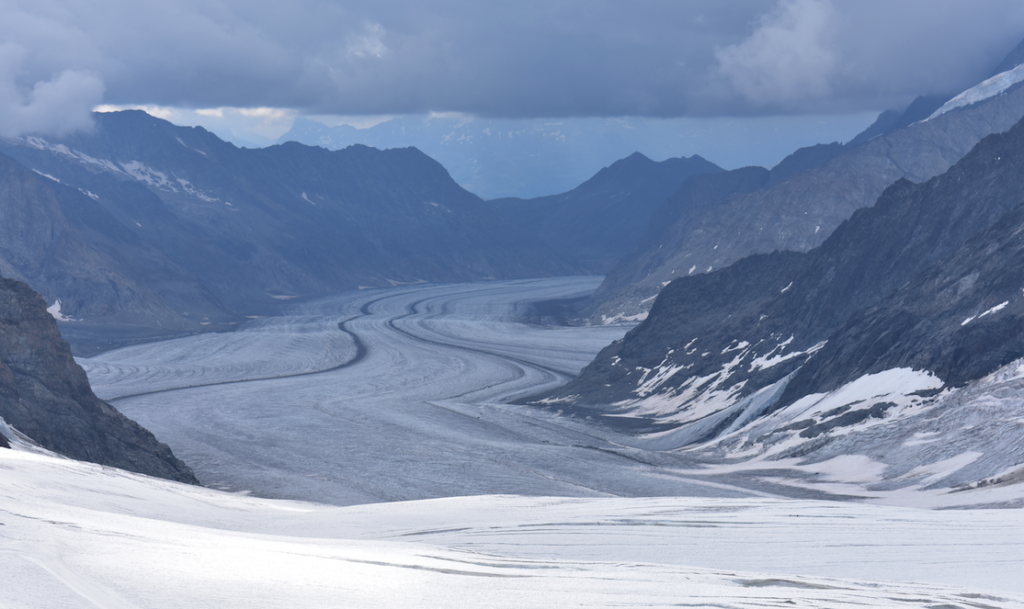 Let’s not forget the highest chocolate shop in the world, courtesy of Swiss chocolate maker, Lindt. We were glad for the chocolate bars on our hike down the famous Eiger Trail.  Somehow we missed the Eiger Museum with the stone memorial to the climbers who lost their lives on the North Face of the Eiger in the early 20thCentury.

We agree that the train ride, the chance to look down on the glaciers and of course the chocolate were well worth the expense and the time. 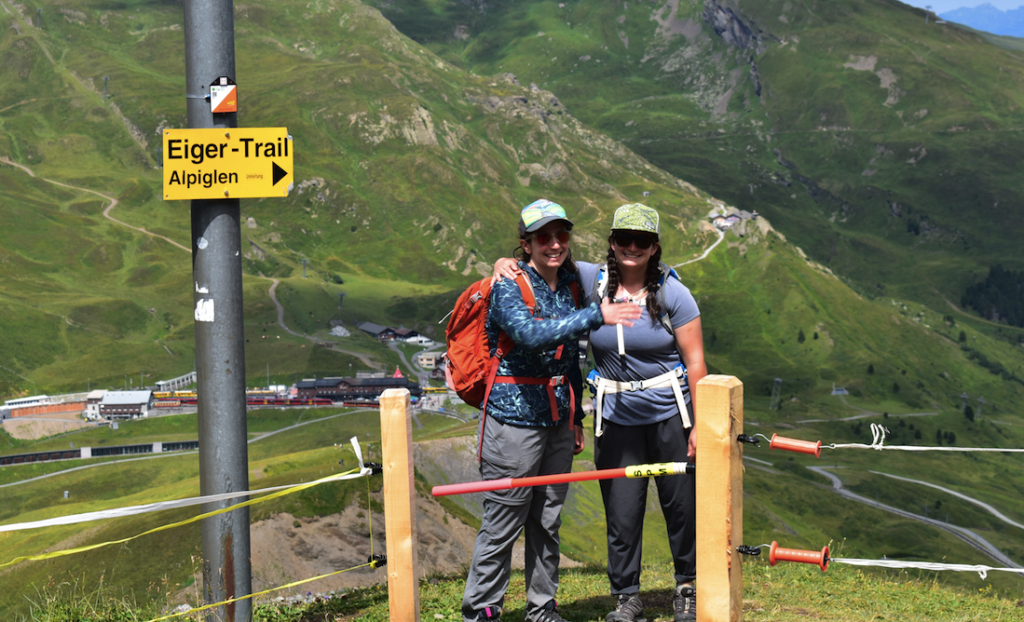 Embarking on the Eiger Trail

After exiting the tunnels on the way back down, we join hikers from around the world on the famous Eiger Trail—about four miles and three plus hours that give us spectacular views of the Eiger’s North Face—a sheer rock wall reminiscent of El Capitan in Yosemite National Park. One waterfall was especially powerful, shooting water at us. We could see a rainbow through it!

Alpenwild, the tour company that arranged our self-guided hiking trip, had transferred our bags to the Hotel Gletschergartenin Grindelwald that has been run by the same family for four generations.

A real plus, notes my daughter Mel: There are so many options to get around—cable car, train, bus, hiking—but no need to get in a car.