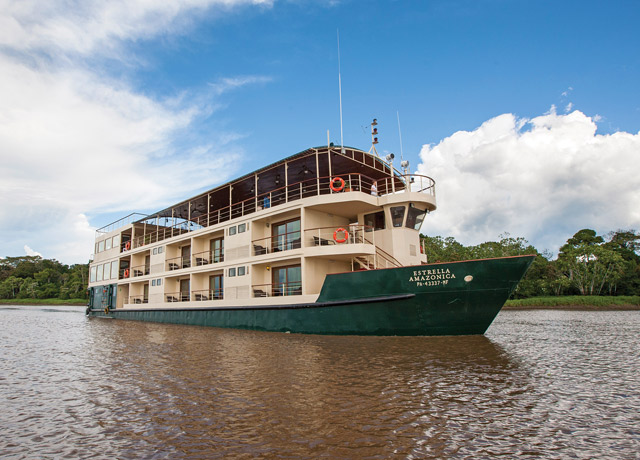 Five-year-old Sammy Lankford has finally stopped going to the mailbox, looking for a postcard from his grandparents.

A year ago this week, on the first night of a long-planned cruise in the Peruvian Amazon, Larry and Christy Hammer, retirees in their early 70s, were killed in a fire that broke out in their cabin on the 31-passenger La Estrella Amazonica. Earlier this month, the Peruvian Navy determined that gross negligence on the part of the ship’s crew, a lack of appropriate equipment and a failure to follow safety protocols contributed to the Lincoln, Neb., couple’s death.

But regardless of the report, the trip organizer, Alabama-based International Expeditions,  owned by the Germany-based TUI group, indicated through their lawyers to the family’s Peruvian lawyers that the family didn’t understand the 1920 Death on the High Seas Act  (DOHSA).

Maritime lawyers explain that cruise lines often use the antiquated law to shield them from financial responsibility in cases where there has been a death at sea because  it mandates that compensation be made only if the deceased were wage-earners. No compensation is required if they were children or retirees, like the Hammers.

Nor is any additional compensation allowed for pain and suffering.

Kelly Lankford and Jill Malott, the Hammers’ daughters, are astonished by both the report and the cruise company’s refusal to take responsibility.  “Arguing that DOHSA applies is merely International Expeditions’ attempt to avoid responsibility, said Jill Malott.  “This is deplorable given the egregious facts and the company’s misrepresentations.”

“My parents were incredibly thorough when they traveled,” said Lankford, noting that the Hammers both held Ph.Ds. “They traveled with American companies. They read everything. They watched every webinar.”

The Navy report backs the sisters’ contention that their parents were given false assurances about the state-of-the-art ship’s safety. The blaze was caused by a short circuit in a power strip the crew gave to the passengers, and it spread to a suitcase and a mattress that was not fire-resistant, as mandated by Peruvian maritime law.

The bedding also did not adhere to requirements of the SOLAS Convention — the international maritime treaty for the Safety of Life at Sea, which the daughters say International Expeditions promoted in its materials.

According to the report, the fire alarm did not operate and “the reaction time of the vessel’s crew was deficient and quite ineffective.” It took more than 20 minutes for the crew to rescue passengers.

“Video recordings show people in the passageway with no fire-fighting equipment and no immediate action was taken to rescue the passengers,” according to the report, indicating that cameras captured the crew’s lack of inaction as the blaze spread. It added that the crew “included personnel who had not undergone training for their duties … and did not hold certificates of competence for their positions on board.” It said fewer than half of those included in the emergency roster were involved in the rescue.

“An opportune reaction and participation by the whole of the crew in the emergency response to the fire would have enabled at least Mrs. Christy Hammer to be saved,” the report concluded, noting that she was alive when she was pulled from the cabin but died on the way to the hospital.

That conclusion rankles the Hammers’ daughters.

“They robbed our children of their grandparents,” said Lankford, who lives in Kansas City.

“Not doing anything for so long seems unimaginable,” said her older sister who lives in San Francisco.

From the beginning, Malott said, “There has been a pattern of deflection and stonewalling” on the part of International Expeditions, from falsely telling other passengers that her father’s CPAP sleep apnea machine caused the fire to making it difficult for the family’s team of investigators to examine the scene.

This week, a spokeswoman for IE issued the following statement to Fox News:

“All of us here at IE continue to be deeply saddened by the tragic loss of life of two of our guests following a cabin fire last year aboard the La Estrella Amazonica, a vessel that we charter.  Peruvian authorities continue to investigate the accident, and Expediciones Amazonicas, the Peruvian company that owns, operates and manages La Estrella Amazonica, continues to assist the authorities with their investigations. Given the pending legal proceedings in Peru we cannot provide specifics, but our highest priority remains the safety of our guests aboard our chartered vessels. We continue to review our operations to ensure we have the right protocols in place.”

The company offered to refund the cost of the trip, roughly $10,000, but the daughters returned the check. The family has not received any type of compensation from the travel company– nor has anything been offered.

James Walker, a maritime attorney and creator of the website www.CruiseLawNews.com, said DOHSA was passed to enable sailors’ widows to recover their husbands’ lost wages if they died at sea due to a shipping company’s negligence. There was no allowance for emotional damage, such as pain and suffering, or grief and bereavement, and families were not allowed to collect damages if the deceased were not wage earners. The act was amended after the 1996 crash of TWA Flight 800 to include emotional losses resulting from an air disaster — but not from cruises.

“We receive on average a call a month from a family member who loses a parent or child at sea,” said Walker, who claims the cruise companies use DOHSA as a shield. “So why should families in an air crash be able to seek their emotional losses against the airlines, but not passengers on a pleasure cruise ship at sea?”

He and other maritime attorneys suggest the cruise lobby has blocked such amendments, but Christina Perez, a spokeswoman for the Cruise Lines International Association, says, “It is not correct to single out the cruise industry as opposing changes to DOHSA. Numerous multiple shipping interests expressed concerns with specific changes to DOHSA when those proposals were considered by Congress several years ago.”

The U.S. Coast Guard has investigated 86 deaths on cruise ships since 2013, a spokesman said. Most were from pre-existing medical conditions, but maritime lawyers said others were the result of negligence: a baby who died after being misdiagnosed by a ship doctor; a woman who was misdiagnosed after a fall.

Maritime lawyers note that this law was passed before the modern cruise industry existed—an industry that now accounts for 25 million people cruising each year, including many children and retirees, according to the Cruise Lines International Association. River cruising is a fast growing segment of the industry

Brett Rivkind, the lawyer handling the Hammer case, has testified in Congress about changing the law, but in this case he said he “would like to see the company step up to the plate and take responsibility when they are responsible and not use a law like this to walk away.”  He hopes to use another legal strategy to hold International Expeditions accountable.

The Cruise Vessel Security and Safety Act of 2010 prescribes security and safety requirements for most cruise ships that embark and disembark in the United States, but it doesn’t apply to ships embarking elsewhere.

Malott and Lankford say their fight isn’t about money. They just don’t want another family to suffer as they have.

“Our goal is to hold this company accountable in any way we can,” said Malott. “Our parents raised us that when you see something wrong, you do what you can to make it right. We will see this through.”