Time-traveling back in history at Conner Prairie IN 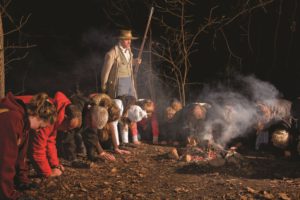 The ragged red cloth hanging from the door handle was the signal that we’d be safe, but we weren’t sure who to trust.

We sent just one from our group — there were a dozen of us hidden in the trees — to the door of the yellow-and-green house. “A friend of a friend sent us,” she whispered when a middle-aged Quaker woman with a kind face answered.

“You’re safe here,” she said, quickly ushering us inside, warning us to be quiet and giving us cornbread. We were hungry, tired and frightened — especially as those who hunted us fired shots outside. “We do not believe God would want anyone to be slaves,” the woman said. “We are members of the society of friends,” her sister added. “You can count on friends to help you.”

It would have taken runaway slaves three or more years to reach freedom and a new life; less than half would make it.

Here at Conner Prairie Interactive History Park, the terrific living history museum outside Indianapolis, a Smithsonian affiliate that focuses on 19th-century Indiana, the journey takes us 90 minutes, starting with our escape from an owner who plans to sell us “back South.”

Fall is a terrific time to visit a living history museum like Conner Prairie, whether kids are going to work in the garden, helping to cook, do laundry or play 19th-century games in 1836 Prairietown, joining Hoosier volunteers defending their state from confederate raiders in 1863 or learning the language of the Lenape, the Native Americans who lived in Indiana from 1795 to 1820. I love the way Conner Prairie melds hands-on activities with costumed interpreters with 21st-century technology to engage kids. (They can figure out how to defend their town from confederate raiders using interactive maps or “meet” those who lived through that era via giant video screens. “You get to do so much more than just look at stuff,” said 11-year-old Emilia Grunden. “Definitely not boring!”

“It’s great the way the kids can interact with the interpreters,” added Keisha Wright, here with her two kids from Fort Myers, Fla. “They go home and look in their schoolbooks and can relate to this part of history.”

This place is affordable too ($14 for adults and $9 for kids 2 to 12) — not much more than a movie! (Read more about my visit here and to Indianapolis in my travel diaries.)

On three October weekends, a hayride will bring you face to face with the Headless Horseman. And once you’ve recovered your wits, you can join in the Halloween fun with a punkin’-a-pult — a pumpkin-flinging catapult — spooky karaoke, a scarecrow competition, lessons in ghost hunting and more.

The museum has just gotten a $2.3 million grant from the National Science Foundation to develop new interactive science experiences into exhibits that will serve as a model for museums around the country.

But the Follow the North Star experience of traveling the Underground Railroad (escaped slaves literally would get their directions from the North Star) is one of the most powerful I’ve ever encountered at any museum, starting with when we’re sized up by those who might want to buy us, treated like animals at auction, unable to help our children or to prevent family members from being separated. “You are dumber than my hogs,” one potential owner says. “Keep your eyes down,” commands another. “Don’t you know your place!”

Museum officials don’t recommend this program for kids under 12 and it is offered just a few weekends a year in November and April. I got a preview recently when I was in town to speak at the Society of American Travel Writers convention. I’d recommend it as a terrific learning tool for any family with tweens and teens.

“The experience makes you really get it,” explains 14-year-old Jackson Burns, who is one of the costumed interpreters we meet along our journey — he plays a gun-wielding slave hunter. “It’s different than reading about this in a textbook.”

That’s an understatement. The back-story: We’re slaves in 1836 Indiana about to be sold “back South.” After we escape, we encounter another escaped slave who is risking his freedom and life to return in the hopes of freeing his wife and son. “It hurts that my son is growing up not knowing his daddy,” he tells us, explaining that before he escaped, he and his family worked on plantations 15 miles apart and could only see each other on the occasional weekend.

We meet farm women who reluctantly help us. “You’ve got a right to freedom but not here!” they say, as their teenage daughters show us the road toward Roberts Settlement, a free black community about 15 miles away.

A distraught carpenter attempts to capture us for the $500 bounty on each of our heads, complaining that we slaves ruined his life. “How can I compete when you work for free?” he yells at us. “I’ve had it with your kind! When my wife got sick, I couldn’t afford a doctor. It’s your fault she died!”

We escape a second time when he goes to find rope to tie us up. There are many obvious lessons for today’s world, where people are bullied, mistreated imprisoned and worse because of the color of their skin, their religious beliefs or sexual orientation, suggests Michelle Evans, who developed the program. Evans notes that the National Underground Railroad Freedom Center in Cincinnati uses the Underground Railroad as a lens through which to explore a range of freedom issues.

“Is it worth the risk?” they ask us. “Only you can decide. Only you know.”