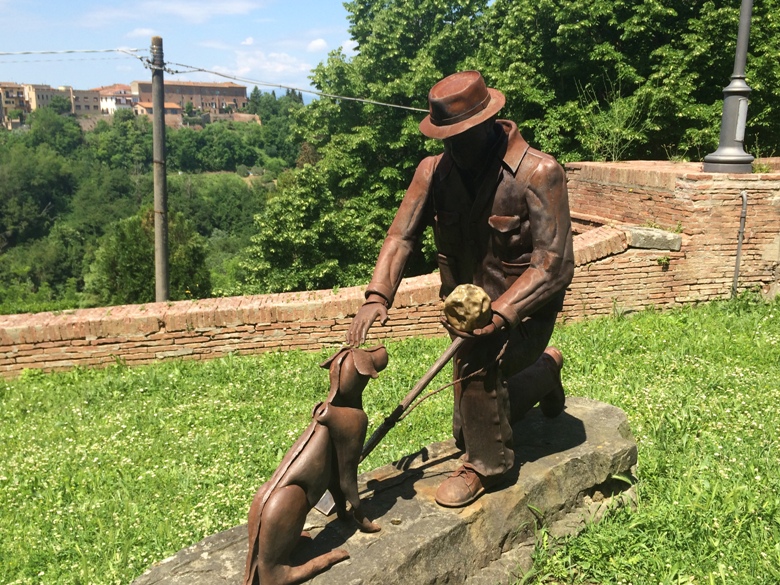 Statue of Truffle Hunter and Dog in Tuscany

I’ve always thought it’s a good idea to encourage the kids to lead the way when you’re out exploring but in this case, Billy isn’t a child—he’s an energetic dog.

Not just any dog, though. He’s an experienced truffle hunter trained since he was a pup to find the coveted black and white truffles in the forests that surrounds the Tuscany town of San Miniato, which we learn is the Truffle capital of Italy. In fact, it was here on an October day in 1954, that the largest truffle ever was found—more than 5.5 pounds by Arturo Gallerini and his dog Parigi. There is a statue of them here; the truffle was sent as a gift to President Dwight Eisenhower. It was also here, we learn, that Michelangelo met with the Pope at the time and received the commission to paint the Sistine Chapel.

We’re on a shore excursion in Tuscany off the Carnival Vista cruise ship, which is sailing the Mediterranean this summer. We’re with experienced truffle hunters Salvatore Cucchiara, a retired policeman, and his son Massimo, who by day is an accountant. Along with Massimo’s sister Letizia, they run the Tuscan Truffle Academy to introduce  tourists to  their passion, handed down from generation to generation. Letizia and her husband have already taken their three year old son out into the forest.  Massimo and Letizia’s grandfather was one of the first truffle hunters in Tuscany; Salvatore Cucchiara was president of the 400-member Truffle Hunters Association for many years. 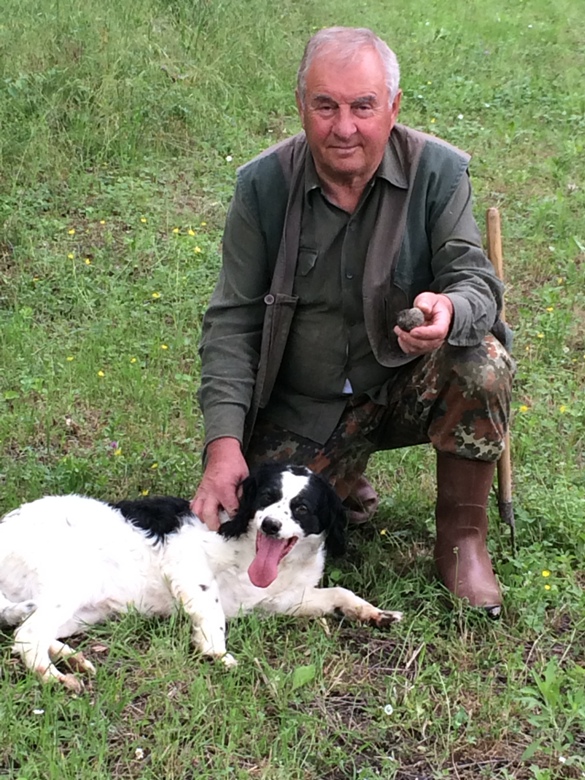 “People call truffles the food of the gods,” said Massimo,  as we follow Billy in the woods.  He explains that the season for the even more valuable white truffle is in the fall and winter. What people don’t know is the black truffle can be found here in the forest under the ground in spring and summer. Billy’s job is to smell the truffle and show the hunter where it is buried. When he stops, wagging his  tail, we know he’s found one, which Salvatore carefully digs up with a special tool. You don’t want to damage the truffles, as they will be sold to local restaurants.

“White is king,” Massimo explains.  “When you find a white truffle, it’s like finding a gold stone in the soil.” A large white truffle can fetch thousands of Euros, he explained. 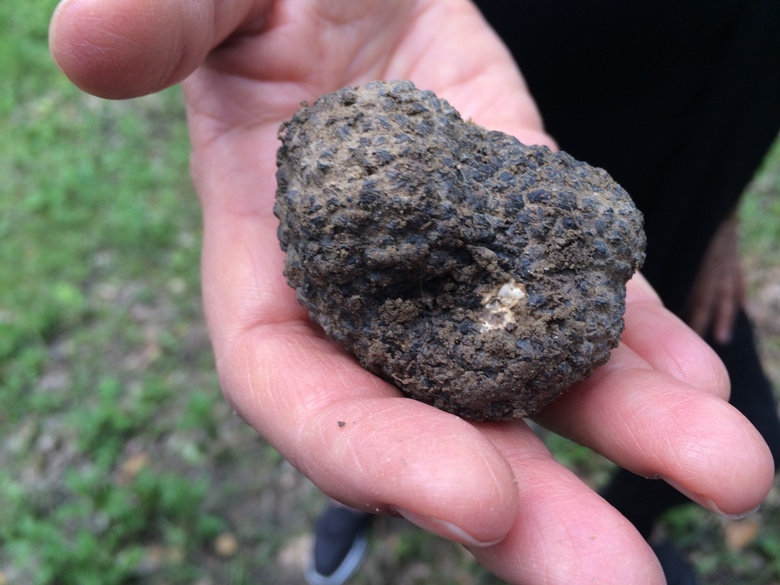 A nice truffle find – thanks Billy!

Today, it seems, more people are interested in truffle hunting. We’ve found our way here with Martina Manfredi, a licensed tour guide we have connected with through Tours by Locals, a worldwide company that connects travelers like us with local guides like Martina. From the port of Livorno, many of the passengers from the Carnival Vista, Carnival’s new and largest ship, have headed to Florence, over an hour away, to Pisa and Lucca. I asked Martina to show us something off the tourist track.

She obliged, taking us to wine tastings at two small family wineries here – Cupelli Spumante and Agrisole wines, both  family run in the medieval city of San Miniato.

Manfredi, who also guides travelers in popular Cinque Terre, arranging cultural and food tours, explained that many cruise passengers don’t realize they can organize a private all-day tour for four or six of them for less than what a ship’s excursion would cost where they are in a group of 50 people all day. We have met wonderful guides like Manfredi and have had memorable experiences with Tours by Locals around the world.

But today is extra special, watching Billy have so much fun and the Cucchiaras introduce us to their passion. “Truffle hunting is a passion,” said Massimo, explaining the hunters can go out on any land that isn’t being cultivated by crops

What is the big deal about truffles? The taste and the smell. A truffle is a kind of mushroom that grows under the ground. It is so pungent and flavorful that you need just a bit shaved on a dish like eggs or pasta. Truffle oil, we learn, is not made from real truffles. And in markets, it is easy to be fooled by those that have been doctored by a chemical spray.

A good day for black truffles would be finding two dozen weighing 2 pounds that might fetch $700. The same amount of white truffles would fetch three or four times that much, depending on how scarce they are.

Earlier in the day, we were learning how to pair wines made by the Caputo family with local foods—cheeses, salami, meat sauce. There is also olive oil that they produce. Concetta Caputo explains that she and her husband purchased the land because they wanted a weekend home for their family and friends. There were vines so they started making wine and olive oil. Their two sons, Fabio, 30, and Frederico, 26, got involved and now the business continues to grow. But, jokes Concetta Caputo, who is 59,“If I’d known how hard I’d  be working, I never would have bought the land.”

The Caputos are as passionate about their wines as are the truffle hunters and the Perticis about their sparkling wine. Sara Pertici, 30, explains she is the third generation wine maker here but like other millennials, she and her brother Marco wanted to put their own distinctive stamp on the business.  Since 2008, they’ve been making sparkling wines from local grapes in the traditional fashion.  Though she studied economics, she says, “Winemaking is my life… I grew up in the business.”

Working with her brother and her mom, she adds, isn’t always easy. They have friends who are other small producers and “we believe it is important to tell our story.”

After we’re done hunting for truffles in the woods, Massimo takes us to his grandfather’s home nearby that today serves as headquarters for the Truffle academy and where Letizia is waiting in the kitchen and the family’s other truffle hunting dogs are noisily playing in a pen outside. Pepe, 10, apparently is the best white truffle hunter of the bunch.

We sample a soup with shaved truffle on top, an egg dish and even white chocolate with truffle. Letizia shows us how truffles are kept (up to a month in the fridge in a sealed container). They are carefully washed so as not to bruise them, dried with paper towels and they should never be cooked—that destroys the taste and the smell.

It’s amazing that something so ugly—when truffles come out of the ground, covered in soil, they really look like big rocks–can taste so sublime.

She is pleased that her son Umberto already likes the forest; Massimo hopes his young daughters will too –for the passion, he says, not the money.  That passion is what they hope to pass down to the next generation.  “Come here and see the tradition,” he says.

We’re glad we did—and sad to say goodbye to Billy.