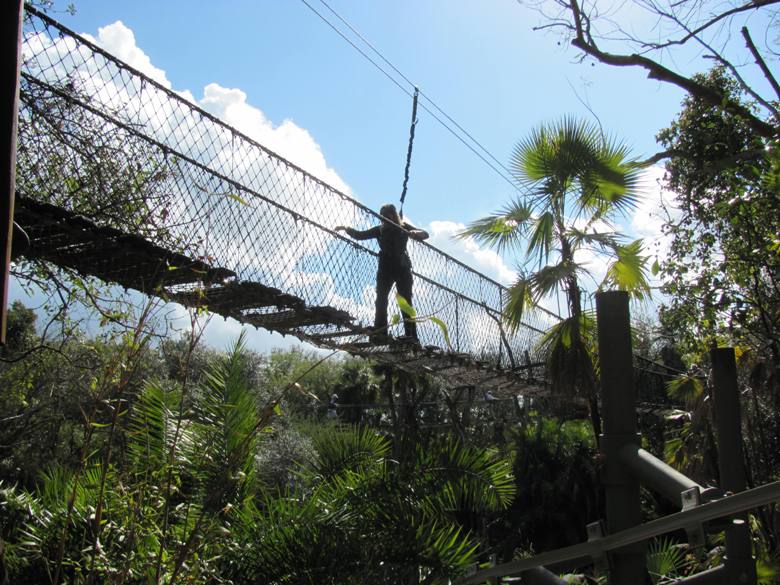 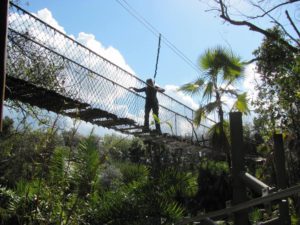 DAY ONE — I’m standing some 50 feet above a river on a rickety bridge that spans more than 100 feet. Ferocious Nile Crocodiles—more than a dozen of them—are lolling on the river bank below.

No, I’m not terrified nor am I in Africa.  I’m at Walt Disney World’s Animal Kingdom experiencing the resort’s newest attraction — Wild Animal Trek — which takes just a dozen “adventurers” at a time, accompanied by two well versed guides on a bush walk and then truck ride through the  most remote areas of Disney’s Animal Kingdom.  A mama and baby rhino walk right in front of our truck. We see a lion and lioness snoozing on a hill top, elephants, giraffes grazing on trees, antelope, ostrich, cheetah, flamingos…the list goes on and on gazelles and antelope.

Having been on safari in Africa, I really do feel I’m there—or at least somewhere else than an Orlando theme park. That’s the idea, of course, says Michael Colglazier, the vice president who oversees Disney’s Animal Kingdom and is so enthusiastic about this new “trek” that he accompanied a small group of journalists to introduce it to us just a few days after it opened.

We’re decked out in special vests (everything must be tethered or in pockets) and cables that hook us to a system of safety harnesses that keep us safe while going over those bridges or looking over the edge of the river at the crocs.

“A number of our guests were telling us they wanted to go deeper, get closer to the animals,” he said, that this three-hour experience is designed to do just that, stopping at places no one else does, getting a CD of photographs (yes, that is you and your family in front of the Giraffe!), crossing the net bridge!  “I don’t think anywhere outside of Africa can you come close to these animals,” he said.   “We have this fabulous reserve. This is a way to push the edges of what the park is supposed to be.”

Colglazier brought his 8 and 10-year-old boys (kids must be eight and weigh 45 pounds and be 48 inches tall).  I don’t think even the most jaded kid would get bored. When were you 20 feet from a grazing giraffe in his own territory, not in a zoo?

He adds that Animal Kingdom, from the beginning, was designed as a place for families to experience nature at its best.  “The people who get the most out of it,” he explains, “figure out that Animal Kingdom is a different park where they can give themselves the luxury to slow down and take their time.”

And Wild Animal Trek gives you the chance to do just that, watching the cheetahs and lions through powerful binoculars, getting to the edge of the river above where the crocs loll, albeit tethered to cables that keep a misstep from turning into a tragedy. Yes, we were also tethered going across the bridges. This is Disney, after all. And perhaps the first place where families feel they can have a bonafide adventure with the security of knowing they are safe at Disney World.  “This is a nice counterpoint to what families are usually doing at a Theme park,” he adds, as we sit down at what could only be described as a bush camp (it looks a lot like the ones where I stayed in Tanzania) on an overlook where we are served an array of African inspired dishes—sundried tomato hummus and pita, curried chicken salad, fruit with mint, shrimp, dried beef and “Jungle Juice” we eat with a bamboo spoon out of metal “camp” dish. Kids can opt for some substitutions (turkey roll-up instead of dried beef, for example).

We see Watusi Cattle, water buffalo, more antelope and gazelles, all of whom live out on this Savannah that stretches for 800 square miles and was painstakingly recreated here (considerable animal research also goes on here.) We meet one researcher studying why this group of male hippos is uncharacteristically living together in a small area. We pass a real hippo skull on our bush walk through the woods where we are hurried along when one of the guides spies an animal up in a tree. This is their home, after all.

Of course this experience doesn’t come cheap. Until Feb 26, it is $129 a person, then the price goes up t0 $189 which includes your Trek, a CD of photos, and your meal, a donation to support the threatened animal of your choice, not to mention the memories. And this one is definitely one for the memory books.  That’s the idea after all.

Next: a race around Disney World