Two days at the Wizarding World of Harry Potter 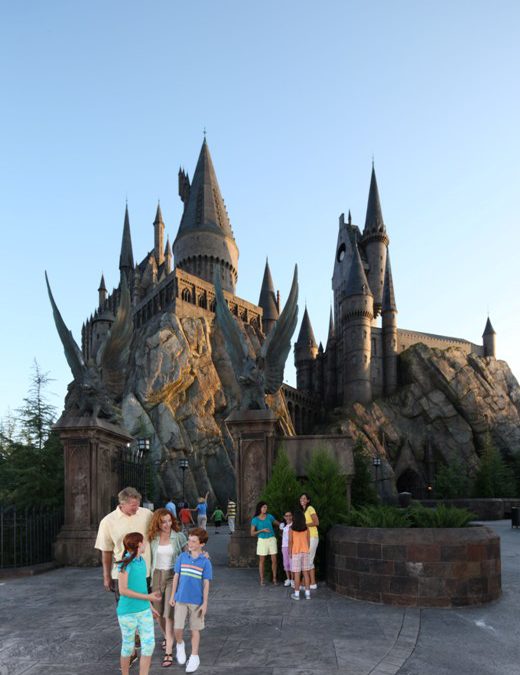 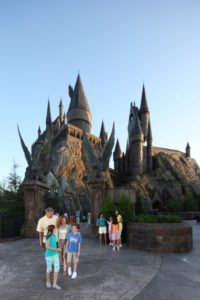 They belong to two teenage girls from Louisiana who are wearing them proudly—they should for $100 each—as they head over to the Wizarding World of Harry Potter tucked in one corner of Universal Orlando’s Islands of Adventure.  www.universalorlando.com

And  crowds. The much anticipated Wizarding World of Harry Potter has just opened and even the most avid fans who planned their trip to Orlando around the new attractions seem unprepared for the crowds.

The lines are everywhere. Two hours to eat lunch, said Sue Gauta, here with a gaggle of kids from Naples, Fl.

“We waited on line an hour just to get in the store to by the kids wands,” she said. “And then we felt dumb because we waited an hour to spend $150!”

Her nephew,  Jake Waleri, 9, thought the wait was worth it.  “You can’t get a wand like this other places,” he said, adding that the park’s Butter Beer—it tastes like cream soda with a shot of caramel—is his new favorite drink.

There were long lines, of course, for the Butter Beer too and even to get into Honeydukes shop with green Candyfloss, Pepper Imps that make you smoke at the mouth, and Sugar Quills;  the Three Broomsticks restaurant the Owl Post, and Ollivanders, where the Wandkeeper might choose you to determine which wand best suits you.

The area is just 20 acres and early in the day people were waiting in line just to get into the Wizarding World, much less get on one of the three rides—the Dragon Challenge coaster, Flight of the Hippogriff family coaster and within Hogwart’s Castle—and the attraction generating the most buzz—Harry Potter and the Forbidden Journey.

The ride uses cutting edge technology. We enter through the gates of Hogwarts—guarded by two winged boars. In Dumbledore’s office, the Headmaster welcomes us and asks us to hear a lecture but once we move into a classroom, Harry, Ron and Hermione convince us to join them instead and we begin the Forbidden Journey, soaring  over Hogwarts, narrowly escaping a dragon attack (feel his fire!), having a close encounter with the Whomping Willow, getting involved in a Quidditch match and more.

I admit I got dizzy. I also admit that I somehow forgot the number of the locker where I had left my bag—you can’t take anything with you and put everything in lockers that use fingerprint technology. Security had to help me. “It wasn’t the first time and won’t be the last,” assured Hosmel Cruz, the Universal employee who helped me. ”It happens a lot.”

Was the ride worth the long wait?  Mary Dosch, a professor from North Dakota and her 13 year old daughter Emily waited an hour and a half. “It was pretty awesome to feel like you are flying,” she said.  Her tip: wait until late in the day when there isn’t such a long line to get into the Potter area.

Another tip– if you stay at a one of the Universal’s three hotels, you can bypass lines at Dragon Challenge—two dueling coasters (choose Hungarian Horntail or Chinese Fireball dragons) –or the Flight of the Hippogriff  through Hagrid’s Pumpkin Patch (great view of the castle too!) and you can get into the park earlier. www.Expedia.com is touting packages with deep discounts at the resort’s three hotels as well as additional savings when you book flights, hotel and theme park tickets. You can get a three-day park ticket for the price of two.

But none of these deals will get you into Hogwarts faster or into the shops. “The kids didn’t want to wait,” said a dejected Melissa Branch, here with her family from Winston Salem, NC . “I didn’t get to go on anything.

Others just smiled through it all. “It’s an experience we’ll talk about, a memory,” said Elizabeth Navarro, a big Harry Potter fan who came with her kids from Fort Lauderdale. “It’s crazy but we came for the experience,” she said. “We’ll talk about it for a long time.”

Besides she adds, when you are waiting- there is so much to see—so much detail –caldrons and scrolls and owls, talking portraits Triwizard Cups and more.

“If you are a Harry Potter Fan,” this is a dream come true,” said Cory Arnd, 11 , from Colorado, who wasn’t minding the wait so immersed was he in the atmosphere around him. “It took me two hours to even realize I was here.”