Two days in Provincetown MA and some whale watching 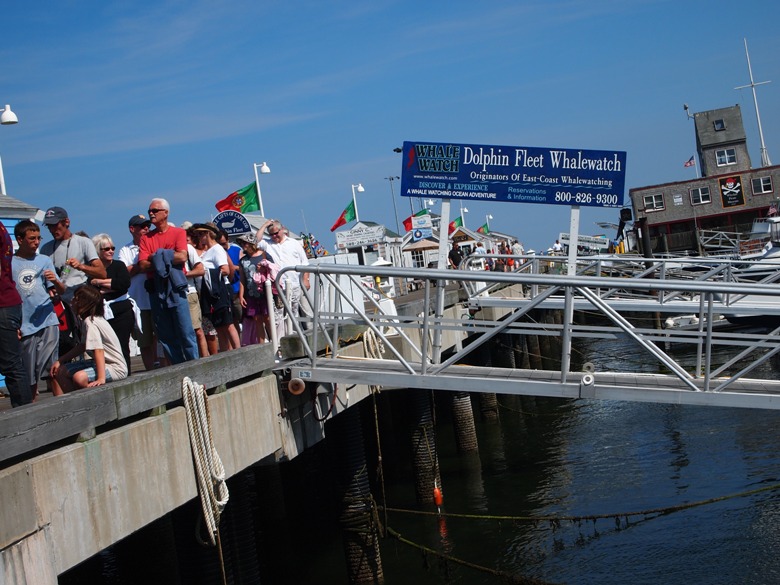 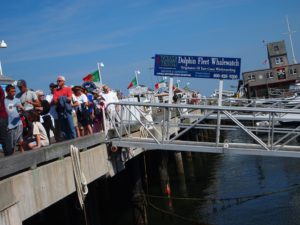 Had this been the 18th Century, we would have been hunting whales from Provincetown, MA, especially after the whales’ oil and bone.

That was all over by the turn of the century and Provincetown (www.ptownchamber.com) segued into being a popular tourist destination, especially for artists and writers and as long as 50 years ago, for gays and lesbians—who now also bring their kids for the beaches and the lobster rolls and the bike trails.

Today we’re hunting whales just to see, not to kill of course along with nearly 300 others on a whale watch with the Dolphin Fleet of Provincetown (www.whalewatch.com) which has been in business for more than 30 years and from its start in 1975 has pursued a mission to preserve sea life, especially the endangered great whales.

Provincetown is the closest port to access the Stellwagen Bank National Marine Sanctuary, a federally protected marine habit for dolphins, sea turtles, sea bird and more as well as whales and we’re not disappointed today.

Within 10 miles of Provincetown, we encounter pods of dolphin s and whales. They are so amazing—some are 40 feet long!  As big as 35 tons!  Frolicking in the water, breaching and spewing water 10 feet up. There is Pele, and Cajun along with her still unnamed pup, and Milkweed.  Some of these whales have been followed for nearly a decade, our guide Mike Bertoldi tells us. Some 295 people are on the boat, crowding from one side to another, when we see a whale.

It is unusual, he tells me, to see a whale pup breach and put on such a show for 20 minutes or longer. We are lucky!

“They were so close to the boat…it was so awesome,” said Maria Flynn, vacationing on the Cape with her family who have vacationed here the same week every summer, her cousin Laura Middleton, from Connecticut says.  Her 3 year old Jenny isn’t bored a bit.

Nearly 11 year-old Ella Simcox is just as enthusiastic, though her four  year-old sister is sound asleep on one of the benches. “They are SO beautiful!,”  She says,  as she watches one flick his tail and another literally turn and twist above the water. Amazing.

“This isn’t something you do everyday,” says Laren Middleton, clutching her daughter Jenny. “It is a real treat.”

Provincetown, on the tip of Cape Cod,  is a mecca for day trippers vacationing elsewhere on the cape as well as gay couples, and, in our case, four elementary school friends looking for a decidedly adult getaway a driveable distance from our homes in NY, Ct and NH. Boston.  There are also two fast ferries www.baystatecruisecompany.com and www.bostonharborcruises.com.

We chose the historic 40-room Crowne Pointe Inn in  a restored ship captain’s house with its own restaurant and spa  (www.crownepointe.com), and 45-room The Brass Key (www.brasskey.com), with its lovely courtyard, pool and hot tub—across the street from one another—with quaint rooms, wine and cheese at 5 p.m. and complimentary breakfasts.  Each hosts a combination of gay and straight couples—no kids—which is nice when we don’t have our kids with us. Co-owner of the two inns, David Sanford, notes that business went up 20 percent when the inns stopped allowing kids under 16. He adds that while P Town certainly remains popular for Gay and Lesbian couples, it is also attracting more heterosexual couples, families on day trips and lots of moms like us. “You wouldn’t have seen that 12 years ago,” he said.

We have our choice of things to do. Do we want to climb the Pilgrim  Monument—some 252 feet up, 116 steps and 60 ramps–celebrating its centennial this year (did you know the Pilgrims  landed in Provincetown first and spent several weeks here before moving down to Plymouth?). www.pilgrim-monument.org

Do we want to go to the Portuguese Festival, celebrating their contribution to the fishing industry here?

Do we want to browse in all the shops on Commercial Street offering everything from hand-crafted jewelry and pottery to tee shirts and toys?

Do we want to head to Cape Cod National Sea Shore with miles and miles of beaches?  Provincetown is ringed on three sides by water and, they boast, is home to some of the best beaches in the country. We can ride bikes to the beaches or walk.

The streets are so narrow in town we haven’t even gotten in the car since we arrived.

There is a lot of history here too. Eugene O’Neill mounted his first play on the wharf in 1915; The Provincetown Museum details the history of the town and community. We stroll Commercial Street with its narrow thoroughfare lined with shops, restaurants and bars.  We stop at Pepes at the patio overlooking the ocean for oysters.

Provincetown is just 120 miles from Boston but couldn’t be any more different, with its beaches sand dunes, shopping and decided eclectic and flamboyant street scene.  (Yes you are bound to see a man or two dressed in drag.)

I learn there are something like 250 species of birds here  and water fowl found on Cape Cod and that the Beach Forest Trail  here is one of the best spots for bird watching (www.massaudubon.org)  At the same time, the National Seashore Bike Trails have been recently renovated . Maybe tomorrow!

We try to save ourselves for the lobster to come tonight. Can’t wait.

The Lobster Pot (www.Ptownlobsterpot.com) lives up to its reputations—crowds, a friendly waitress and some of the most succulent lobster I’ve ever eaten. My friends rave about the baked stuffed lobster with shrimp, scallops and more. We roll ourselves home.