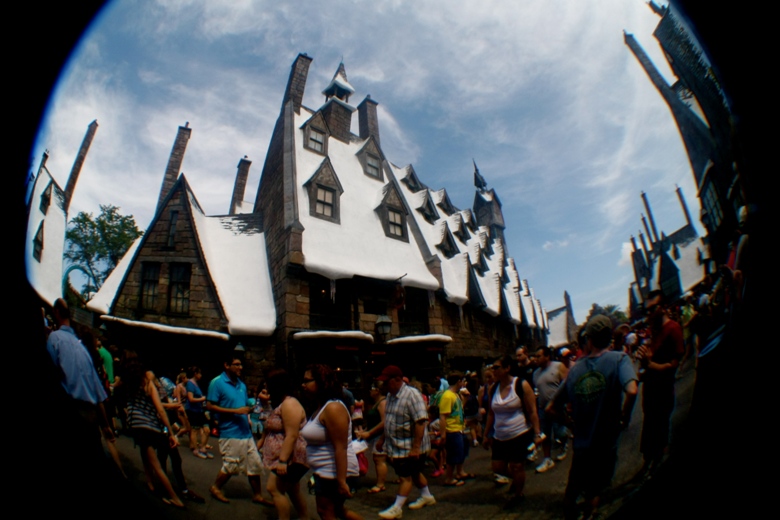 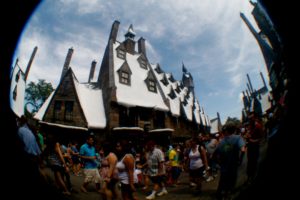 At Wizarding World of Harry Potter by Eva Weinberg

We woke up early on Thursday morning to disembark the ship, from there we started the hour and a half long drive over to the Portofino resort on Universal’s property. We walked in not expecting anything out of the ordinary but walked into an Italian inspired hotel that fully embodied all that one would hope to feel on a trip to Italy.

After quickly dropping our bags at the convenient bag drop, we made our way to the water taxi. A harbor with boats, restaurants and stores completed the Italian feel outside. The water taxi was much easier to maneuver than the monorail at Disney, there was only one stop! The water taxis came every 10-15 minutes, and the lines were rarely long.

Once we arrived at Universal we met up with Matt, our amazing tour guide, who immediately brought us to our most anticipated attraction, The Wizarding World of Harry Potter. We rushed to the most popular ride in Harry Potter World, The Forbidden Journey. Luckily we didn’t have to wait in line, but it definitely would have been worth the wait.

The crowds were overwhelming and made it difficult to move around, but it was everything we had hoped for and more. Luckily, staying on Universal’s property gives you the chance to skip lines using your room key, a definite bonus, you get the same perks as a fast pass without the price.

Next we went on both of the Racing Dragons, two completly different roller coasters that are “racing.” A ride that we would do again in second, but there was so much more to see.

Next, we got the coveted Butterbeer, more or less cream soda with caramel, we recommend going into the bar attached to 3 Broomsticks, the line is shorter for the same options. We both got the frozen, definently better, but warning Butterbeer is very sweet!

Another warning, Ollivanders is a show, and more aimed toward a younger viewer. We would not recommend waiting too long in the line, but the effects were impressive.

We walked out of Harry Potter World through Camp Jurassic, a lot of fun for a younger crowd. Being two seniors in high school where we had way to much fun stepping on the dinosaurs footprints, each making a different sound.

Finally we went to one of the rides we were all most excited about, Spiderman, recently redone showcase to the best 3-D technology available. But not before we made a quick stop in a villain themed photo booth to “capture the moment.”

Back to Spiderman though, Diving, spinning and flipping feels so real all while riding on a flat track. The technology was so realistic you can see the hairs on the bad guys face and stitching in Spiderman’s suit, when Cam wasn’t wincing from how realistic the bad guys looked, we were screaming while taking on all the bad guys, including one who squirts water at you! We then made one last stop before lunch,

The Incredible Hulk Roller Coaster, one of our favorites. You start out at full speed and do not slow down at all throughout the ride, with flips and mist we were frozen the whole ride, the next day we even insisted on going back.

We had lunch at a restaurant named Mytho’s, winning best theme park restaurant for several years in a row. The food took a little bit longer than we had hoped, Cam got the fish tacos which were okay and Eva got the recommended pasta of the day which she enjoyed.

Later we went to The Blue Man Group, one of the best performances we’ve ever seen. The group knew how to keep the audience involved and were hysterical yet still showed their talent. After the show we went over to CityWalk before catching the water taxi  back. Citywalk had so many options for kids of all ages, shopping, restaurants and vendors made it so much fun to simply walk around.

Overall Universal definitely had more to offer teens rather than Disney.