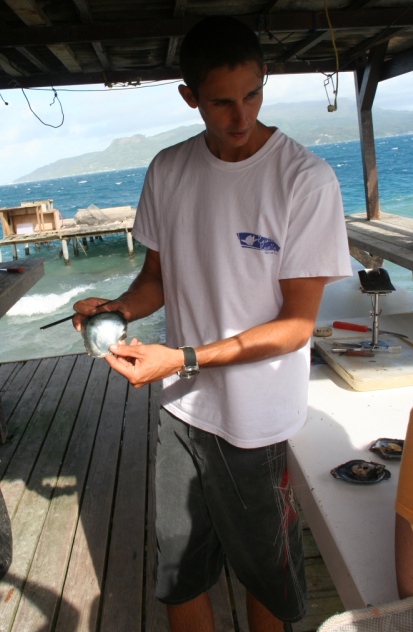 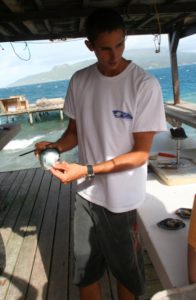 Hioe, an American educated nurse, now runs The Vanilla Valley (email: vanillavalley@gmail.com) on the Tahitian Island of Taha’a. It was a plantation her grandfather first started, she explained, that had gotten neglected in her father’s day. “I took over eight years ago,” she says.

Click: PHOTO GALLERY Taha’a is 122 miles, the books say, northwest of Papeete and about 25 miles west of Huahine — about a three hour sail on our chartered catamaran from Tahiti Yacht Charter (www.tahitiyachtcharter.com). We are in a small spectacularly pretty bay in Taha’a lagoon surrounded by green hills. Taha’a is just 55 miles around and has a population of less than 5000. Incidentally all of the Polynesian islands are surrounded by coral reefs and beautiful lagoons – the legacy of volcanic island building going back millions of years.

Taha’a is the leading producer of the vanilla in these islands. In fact, Hioe tells us, of the 200 vanilla producers in the south pacific, 80 per cent are right here.

She shows us the vanilla vines and what a laborious process it is to pollinate each flower by hand. “The bees aren’t smart enough to do it,” she tells us. “If the bees did it would be so easy!”

All around us are fruit trees — limes, star fruit, grapefruit, mangos. “We don’t go hungry here,” she says. They have 47 species of banana trees!

There are literally tons of vanilla beans — thick dark brown beans — waiting to be dried because there hasn’t been enough sunshine, she explains. The natural perfume is spectacular.

So much work — and there is just Hioe, her husband and a helper, producing a modest 30 tons a year.

The four 18 year olds are as interested in the adults — as much I think in the chance to glimpse a different culture and way of life as to see where vanilla that they take for granted might come from (though the vanilla we use in the USA doesn’t come from Tahiti, she tells us).

“You have to love what you do,” she tells the girls. That’s a good message for four girls about to go off to college soon.

Our next stop is the small black pearl farm on Taha’a operated by Monique and Bernard Champon and their 26-year-old son Aymeric, who tells us he trained in computer science before returning to the family business, started 11 years ago when his parents gave up their boat building yard.

Again — so laborious — as we stand on the windy dock, Aymeric explains they insert a tiny ball (made from Mississippi River Delta clam shells) in the oyster for the black mother of pearl shell that Tahiti is so famous for. Unless it rejects the ball, the mother of pearl substance will grow around the core — it will take 18 months. And the same oyster can be “inseminated” four or five times — each pearl growing larger than the last.

The black pearl industry, the books say, has now replaced commercial fishing as a source of revenue here. Harvesting oysters for pearls started here in the 19th century. The divers (they free dive to check on the oysters about 21 feet — to make sure they are “right” to implant a tiny round nucleus. After the graft, they are left to grow for 18 months and if all goes well, there ‘s a cultured pearl.

Aymeric’s mother Monique shows us the process to “rate” the pearls is equally laborious — they are rated not so much by size but by luster and the lack of imperfections. They are different colors — not so much black but grays with purple, black and gray hues.

Finally, she shows us the finished jewelry — spectacular earrings, necklaces, pendants — unfortunately too expensive for us.

We return to the boat, motor over to a bay on the other side of the island and eat dinner — fresh tuna in coconut milk that our captain, Turo, prepares, couscous, salad and the piece de resistance — – brownies the girls have made with sautéed bananas for desert.

No five star meal could have been any better!

Next: The Pied Piper and the Coral Garden