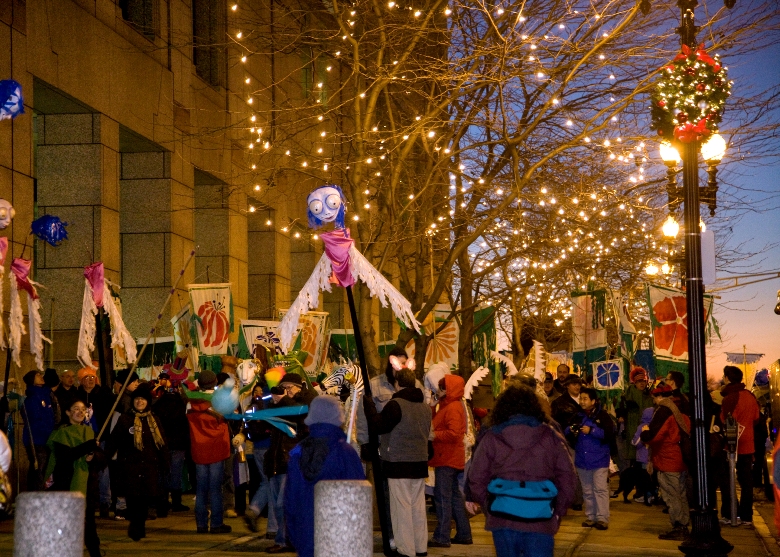 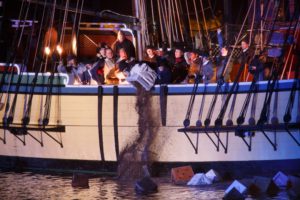 There may be 21st-century LED holiday lights all over Boston, but we’ve time-traveled back to 1773 — Dec. 16, 1773 to be exact — the night that literally changed the course of American history.

Welcome to the Boston Tea Party. The Boston Tea Party Ships and Museum celebrates the 240th anniversary of the night the Sons of Liberty, disguised as Mohawk Indians, dumped 340 chests of British tea into the harbor to protest the hated tea duty, which turned out to be the final straw in a series of unpopular policies and taxes imposed on the American colonies by Britain’s George III.

On Dec. 16, join the spirited debate at the Old South Meeting House — just as the colonists did in this very building — and then follow the crowd, led by fife and drums, from the Old South Meeting House to the historic waterfront, along the route the Sons of Liberty took that night to destroy the tea — all 92,000 pounds of it. (The tea would be worth more than $1.7 million in today’s dollars.) Watch as they storm the Brig Beaver.

No worries if you’re not in Boston on Dec. 16. You can travel back to colonial times any day at this first-rate museum, which recently celebrated its first anniversary. Stay nearby at the InterContinental Boston overlooking Boston’s historic waterfront where there is a special Tea Party package starting at $299.

I especially love Boston at the holidays — special holiday strolls with costumed re-enactors along The Freedom Trail, the BLINK! Holiday lights extravaganza at Faneuil Hall where you can buy all of your last-minute gifts, stopping for a bowl of chowder when you’re hungry, the huge Copley Square Christmas Tree, “The Nutcracker,” performed by the Boston Ballet, and most important, the kid-friendly First Night celebration New Year’s Eve, the oldest and certainly one of the largest such events in the country. Let’s not forget the fantastic New England Aquarium and the Boston Children’s Museum, which has just celebrated its 100th anniversary. (Here’s what I wrote about that.) 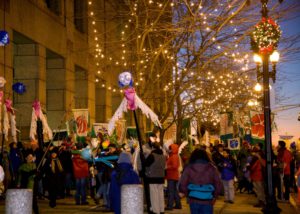 I’m not sure there’s another city like Boston where you can so easily travel from the 21st century to the 18th, and back again. And the kids will have so much fun they won’t realize how much American history they’re learning, especially at the Boston Tea Party Ships and Museum. “I learned a lot more than I knew,” said 13-year-old Alexis Lunsford, who was visiting from Sugarloaf, Pa.

First, play the parts of the colonists who gathered to debate King George’s tax on tea. What could they do about it? What should they do?

Like they did, we board the ships holding the tea— two of the three historically accurate replica ships, the Beaver and the Eleanor, which took part in the Boston Tea Party.

“Dump the tea!” we’re told, and we do — again and again, as this cache of “tea” is tied by ropes to the side of the boat and a lot lighter than those tea chests really were — the originals weighed about 360 pounds each. “Do you want to pay the king’s tax? NO!”

At the museum, we see the last remaining tea chest from that raid, which was picked up the next morning by John Robinson, a teenager, and hidden under the stairs when he went off to fight in the Revolutionary War. It had been passed down in his family from generation to generation.

We hear the stories of the Sons of Liberty, the secret organization that carried out the raid. Like that of John Crane, who was thought to have been killed but woke the next morning with nothing worse than a bad headache. Or Sarah Fulton, who created the Mohawk disguises for the men.

We learn how this one event, witnessed by thousands on that cold night, had such enormous implications on both sides of the Atlantic.

“You can see both sides here,” said 11-year-old Hannah Kuklis from the Boston suburbs, adding that the Tea Party experience is “is more fun” than just walking along Boston’s famous Freedom Trail with its historic sites (did you know cattle once grazed on the Boston Common?), its cemetery (Paul Revere, Samuel Adams, John Hancock and others are buried in the Granary Burying Ground) and houses (Paul Revere’s is the oldest in downtown Boston, built around 1680.)

The Museum experience — just a little more than an hour — is a mixture of visiting the ship with costumed interpreters — kids especially like meeting the “crew” and touring the areas where the crew lived — they are tiny! And consider that it could take two months to get from Boston to England

Did you know the term “kidnapped” came from that era? That’s because young boys were “nabbed” to work on these ships because no one wanted to do it, thus the term “kidnabbed…”

We can stand in front of talking portraits of King George and Samuel Adams — who never met but debate here — their words taken from their journals and letters. And Holographs introduce us to two young 18th-century women grappling with the issues of the day.

“I am loyal to our king,” the young woman named Catherine declares staunchly.

There’s a prize-winning movie, “Let it Begin Here,” that makes us feel as if we are there, starting with Paul Revere’s famous ride to warn the patriots that the British soldiers were coming and ending with the famous Battle of Lexington and Concord and “the shot heard ‘round the world,” which started the Revolutionary War.

“Kids definitely should do this when they visit Boston,” said Hannah Kuklis.