Visiting Chicago in summer: Baseball, pizza, burgers and The Bean 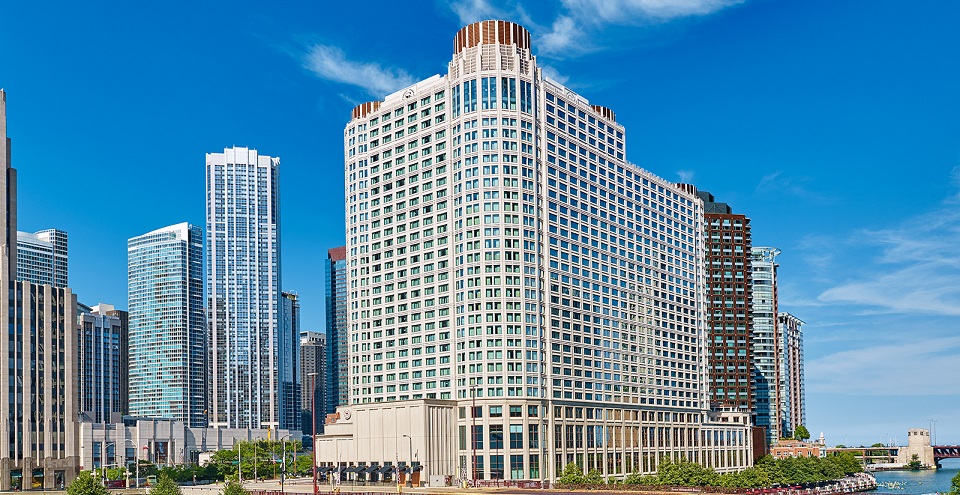 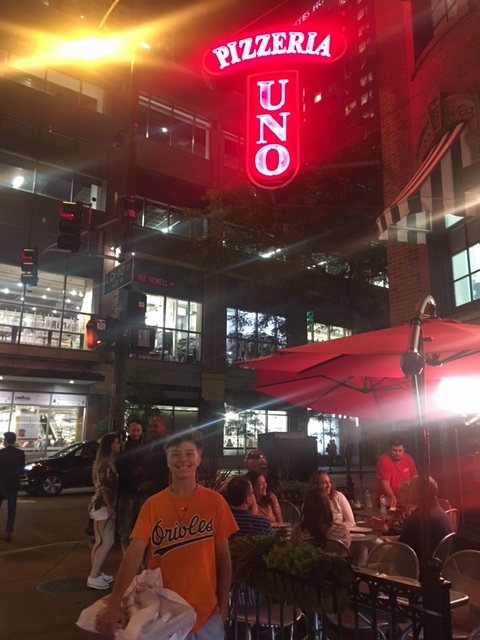 CHICAGO — My mom and dad said that we could finally take a quick family vacation this summer. We chose Chicago because there was an Elite gymnastics meet that my sister’s friend, Alyona Shchennikova, was competing in.

Hannah really wanted to go watch Alyona at the US Secret Classic Meet at the Sears Centre in Hoffman Estates, IL. We had never been to Chicago as a family so it seemed like the perfect place to go for a long weekend.

It’s an easy, two-hour direct flight from Denver, where we live. Since I’m a big baseball fan, of course I checked to see if the Cubs or White Sox were in town (because my Dad and I did NOT want to go watch another gymnastics meet), but it turned out that the Under Armor All-American Game, sponsored by Baseball Factory (which is an organization I have been selected to be a part of) was being held at Wrigley Field the same night as the Gymnastics Meet!

We left Denver on Thursday afternoon and arrived in Chicago in time for dinner. Everyone told my mom and dad that the first thing we should eat was get deep dish pizza. We made our way to the original Pizzeria Uno in downtown Chicago. We had to wait 45 minutes for a table, but it was well worth the wait. My mom even liked it because she could order a gluten-free pizza! It takes so long for deep dish pizza to cook that they take your order when they add you to the wait-list. They start your pizza and then finish it when you are finally seated.

After filling up on pizza, it was time to check in to our hotel, the Sheraton Grand Chicago. Our room had an awesome view of the Chicago River. We wished our “oversized family room” had been a bit larger, as well as the pool, but the workout room was excellent and a lot of families were enjoying the concierge level service. Some families were staying at the Sheraton Grand because of its view of the fireworks display at nearby Navy Pier on Wednesday and Saturday nights during summer.

Early Friday morning our Dad made us get up and get moving. We had a quick breakfast on the Congierge level and then took an Uber directly to the Willis Tower. On our Uber ride, my Dad bought tickets so we didn’t have to stand in line. We got there shortly after the tower opened and were on one of the first elevators to the top. The views were amazing! Hannah and I couldn’t believe how far we could see. The day was so clear and we were both excited to go out on the Sky Deck. We waited in a short line and when we finally got to the front we both got a little scared, as did plenty of other people. We were determined to overcome our fear and take a quick picture. Once we were done we headed back down the elevators and couldn’t believe that the lines were out the door. Although we weren’t happy that we had to get up early, we realized it’s better to get there and be first than wait for hours. 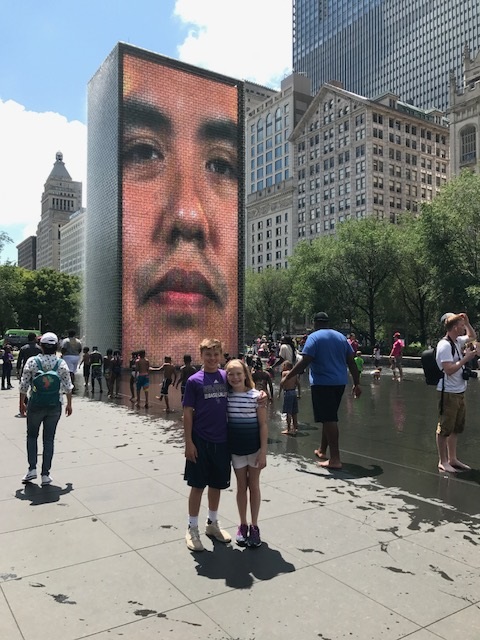 After the Willis Tower (we learned it used to be called the Sears Tower), our plan was to visit Millennium Park. Of course, we had to take a quick stop at the Nutella Café which is a block from the Park. The crepes were out of this world!! It’s so popular that we had to wait outside before we were even allowed to go in and order. You order at the counter and then can either sit and eat or take it to go. Since we were tired from walking across town, we of course wanted to sit and rest our feet.

Once our bellies were full of Nutella, we walked across the street to the Park. We watched local kids splashing in Crown Fountain, took pictures of our reflection at The Bean, which is actually a sculpture called “Cloud Gate” – locals have dubbed it The Bean. We walked around the Pavilion where an orchestra was rehearsing, and checked out the climbing walls and other family activities.

From Millennium Park, we walked along the lakefront all the way to Navy Pier. Before eating a late lunch and exploring the Pier, we decided to rest our legs and board the Shoreline Sightseeing Riverboat Architecture Tour along the Chicago River. We didn’t think it would fun (we thought our parents were making us go) but it ended up being one of the highlights of our trip! As I said, I’m a baseball fan, so my choice for lunch was Harry Caray’s Tavern at Navy Pier. We saw some really cool sports memorabilia and of course a statue of Harry Caray, and famous baseball announcer. After eating lunch and walking around the entire pier, we’d had enough and just wanted to go back to the hotel and chill before dinner.

Saturday morning, my mom and I decided to get up early and go work out. The fitness room was pretty crowded, but there was plenty of equipment and a variety for everyone. I rode the stationary bike while my mom lifted free weights, and then I took her through my off-season baseball workout program. After our workout, we got ready and met my Dad and sister for a big day of shopping along the Michigan Avenue’s Magnificent Mile. Our favorite stores were Bloomingdales, Vineyard Vines, Adidas and Nike. 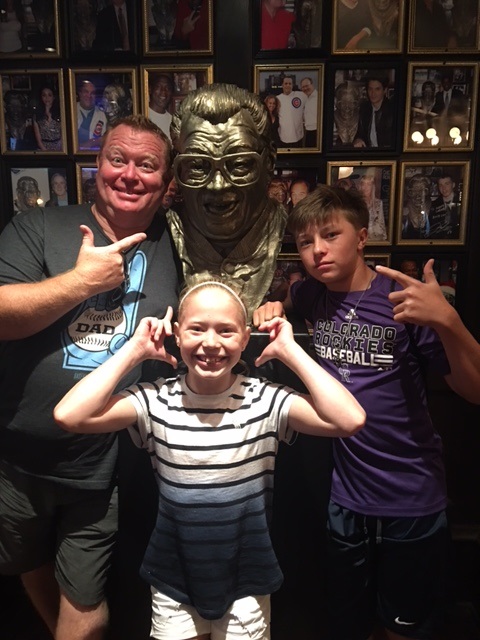 Hamming it up at Harry Carrys

It was time for a quick bite before my sister and Mom headed off to the gymnastics meet and my dad and I headed off to Wrigley. I love burgers and saw that the hotel had a place called the Chicago Burger Company, which hit the spot. My mom and sister, and my dad and I, had a great time at both of our events. And to top it off, my sister’s friend Alyona won the meet and my sister got to meet some of her gymnastics idols. I got to see historic Wrigley Field, took a picture with the World Series Trophy, and got a first-hand look at what it takes to play at the next level.

Sunday was a morning for sleeping in. Our only plan for the day was to eat breakfast at Yolk (a few blocks from the hotel) and to do a little extra sightseeing. We drove around Chicago and saw Soldier Field, the Shedd Aquarium (although we didn’t go in), Adler Planetarium, and lots of beaches.

It was finally time to head to the airport and say goodbye to Chicago! We thought it was a really cool city and plan on going back sometime soon!