Visiting the Grandest of Canyons with young kids 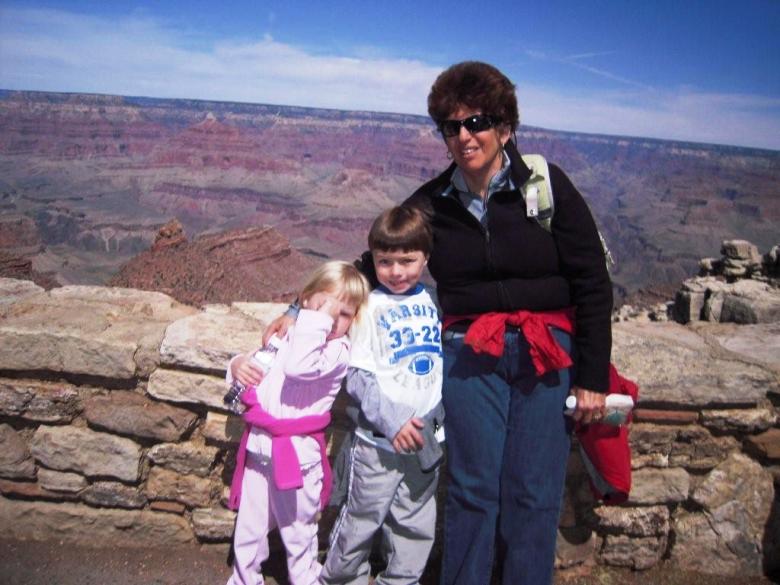 Hannah Ethan and Eileen at the Grand Caynon

Wow! We were all impressed. How can you not be, staring down into the most famous hole in the ground? A mile deep! The South Rim, where we were, and the North Rim are 10 miles apart as the bird flies, but 215 miles apart by road. So we were staying on the South Rim, spending the night after taking the Grand Canyon Railway on journey early tourists made more than 100 years ago from Williams, AZ, 60 miles distant.

I looked around and saw kinds of families — from around the world here to experience what is widely considered one of the wonders of the world. It was set aside as a national monument by Theodore Roosevelt in 1908 and became a national park in 1919. It remains one of the most visited parks.

I was here when I was in my 20s when I hiked down to take a river raft trip on the Colorado, an adventure I hope to repeat some day. I returned when my kids were young and most recently I was there with my cousins Jayme and Mike Sitzman and then six year old Ethan and four year old Hannah in 2008. The thing about the Grand Canyon and the other national parks is that there are ways to experience it whether you are four 44 or 84 and, indeed, we saw many seniors with canes and people in wheel chairs as well.

The kids were interested in everything — the different hues of the rocks (red, while, brown, green) and that different colors signify the age of the rocks dating back as much as 2 billion years! Of course they were interested in souvenirs before the day is out, so we bought key chains with their names on them, story books about animals who poop in the park, pins to put on their stuffed animals.

The best souvenir was free — the wonderful Junior Ranger booklet that encourages them to explore the canyon in age-appropriate ways, drawing pictures,, answering questions, noting which birds and animals they’ve seen. Their prize: A Junior ranger badge and certificate.

There are many ranger programs to choose from too. We checked out the morning fossil walk. We walked with the kids along the rim trail, taking in the amazing vistas (the visibility is over 100 miles). The kids didn’t get bored. Having some snacks and water along helped and it wasn’t an arduous hike — pretty level terrain. We counted the dogs we met (eight) and the “timeline” imbedded in the trail going back millions of years so that we realize how these canyon walls have been here so much longer than any of us. It is a sobering thought.

We reminded the kids that this isn’t a theme bark, that they have to stay on the trail and be careful. They don’t want to get too close to the edge. “Too scary,” Hannah declares.

We walked almost two miles along the rim trail to the Yavapai Point. By then it was getting late and the kids were getting tired and chilly. We wanted them to end the day happy so we hopped the free shuttle back to Maswick Lodge, where we spent the night.

Even the shuttle driver entertained the kids with riddles along the way.

We brought their Junior Ranger books to dinner — they used their detective skills to spot (but not collect) everything from a ranger to a raven to a pine cone to a California Condor (one of the largest and rarest birds in North America). It turned out that fossils indicate these majestic creatures have lived in this area for thousands of years. Today, with the combined efforts of state and national government agencies, the California Condor population is being re established here with more captive raised birds being released, and additional nesting.

I like that the Junior Ranger program encourages the kids to look at the park from their perspective. Many ancient people left behind pictures in the rocks of the Grand Canyon, one activity says. Draw your own pictograph and describe what it means (of course the kids are also told never to write on real works in national parks).

Write a story about your feelings about the Grand Canyon, another activity directs, while the kids are also instructed to write the name of an animal or plant in its habitat — does the ponderosa pine belong in the forest? A prickly pear cactus? A lizard?

There is even a green lesson. Kids are encouraged to clean up an area at home, talk about the Grand Canyon at School and learn about plants animals rocks and history (check out www.nps.gov/webrangers).

Geology, history, biology… how much more can one place teach kids — without them even realizing they are learning!

We finished our day with dinner at the historic El Tovar Hotel. The dining room was filled with families and kids can choose either from an inexpensive traditional kids menu or half portions from the adult menu. We sat looking out at the changing colors of the Grand Canyon as the sun goes down.

“The rocks are pink!” said four year old Hannah, who loved pink then and now.

We dined on steak and excellent mahi mahi and sip wine while the kids work diligently and happily on their Junior Ranger books.

Is there such a thing as the perfect end to a perfect vacation day? We came close!