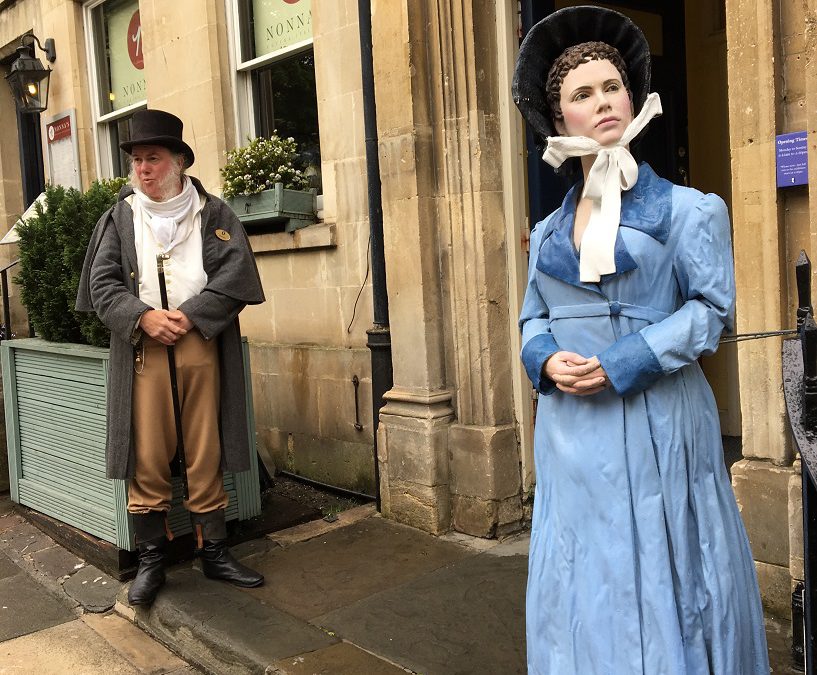 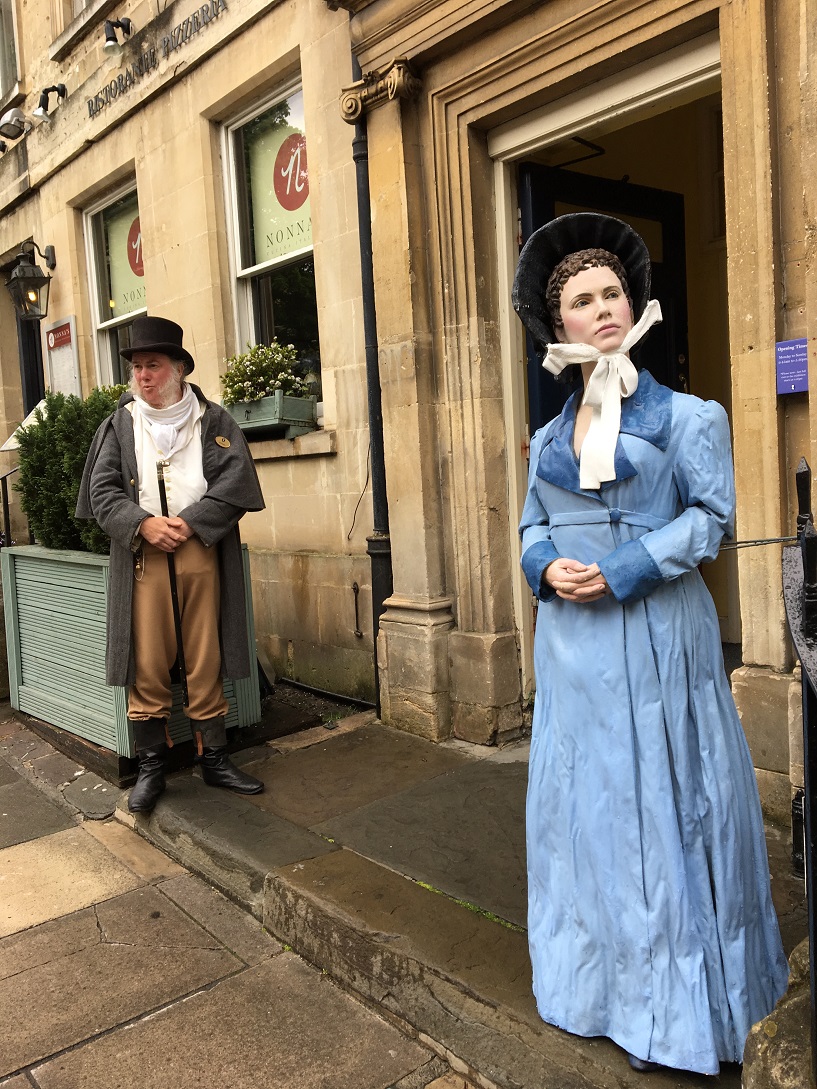 At the Jane Austen Centre in Bath

CHAWTON, England — The tiny writing table and chair don’t seem very comfortable, much less the place where some of the most beloved and enduring English heroes and heroines were brought to life.

Jane Austen was her most prolific at this small table and chair in a modest cottage in the tiny village of Chawton in Hampshire, England, about a half-hour from where she was buried in Winchester Cathedral. (As was the custom of the time, her gravestone in the floor of the cathedral makes no mention of her being a writer.)

VisitBritain is celebrating the 200th anniversary of Austen’s death (July 18, 1817) with a year’s worth of exhibitions, talks, walks, writing competitions and performances here and elsewhere, like in Bath, where fans come to walk the streets that Austen, who lived and visited here, used in her novel, skewering some of the mores of Georgian Society in the process, explained Andrew Butterworth, a professor who oversees a student abroad program. Butterworth teaches and leads Austen courses and tours in Bath, which is about an hour and a half train ride from London (get discounted train tickets in advance from Trainline).

What’s the big deal about Austen? In the early 18th century when Austen lived, “Men didn’t take women writers seriously,” said Anthony Hughes-Onslow, the general manager of the Chawton House Library. The library houses a unique collection of early women writers and also helps to foster an appreciation and understanding of their work. That Austen flourished during this time — her first works were published anonymously, as was the custom for women writers then — makes her enduring success an all the more unique and improbable accomplishment.

Austen had an acute ear for the role of women in her time, the hypocrisy of the social classes and the ability to have her characters grow, learn and change. “Pride and Prejudice,” “Sense and Sensibility,” “Persuasion” and “Emma” are some of her most popular, literary classics and, of course, today, she is revered as one of the best known and respected British authors whose work continues to inspire readers, scholars, filmmakers and TV producers around the world.

“I thought I needed to come,” said Megan Rice, from Salt Lake City, who has a master’s degree in English literature and brought her grandmother, sister and good friend on a literary trip to Britain. She left her husband and three kids at home. Rice was visiting Jane Austen’s House Museum in Chawton, braving driving on the left side of the road for their tour. (The best way to get around Hampshire is by car.) The modest cottage where Austen lived with her mother, sister and friend, after years of poverty and bouncing around among relatives, is where she was the most prolific, writing six of her best known works between “Sense and Sensibility” in 1811 and “Persuasion” in 1817. Austen wrote her novels with a quill pen seated at that tiny writing table. 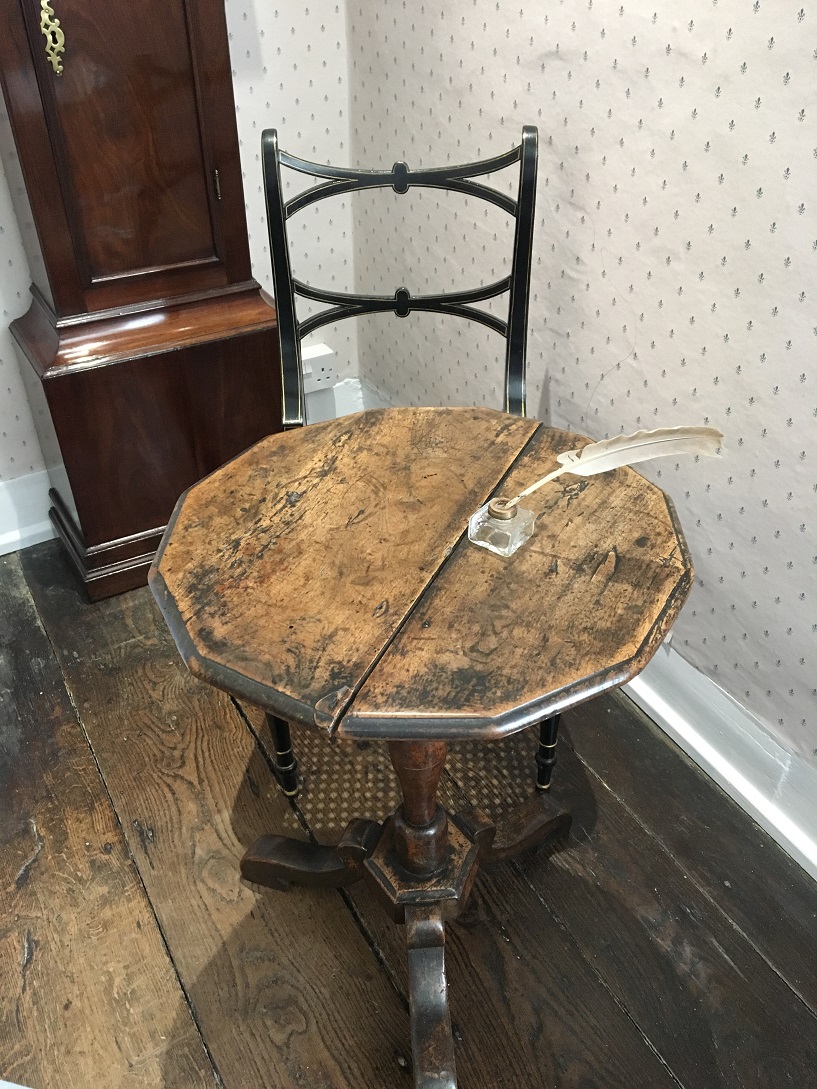 Visiting where Austen lived and worked is also a way to experience an England many tourists don’t see — rolling countryside, the spectacular coast, the famous New Forest, a national park known for its biking and picturesque villages. We were lucky to spend a few days at Chewton Glen, a country hotel in Hampshire popular with London families for its proximity to the beach and New Forest, expansive gardens, kids’ programs, cooking classes, sports and more, but not well known to Americans. (More about the benefits of exploring more than major cities in an upcoming column!)

At the museum, there are workshops on everything from writing to printmaking to quilting to gardening. (Contribute to the community story quilt being done with quilters around the world to explore the impact of Austen’s life.) Outside are hands-on activities for the kids — the chance to write with a quill pen or make up their own story in a large dollhouse, for example. There is also a small exhibit at the Winchester Cathedral and another titled “The Mysterious Miss Austen,” which is a short walk from the cathedral. This exhibit explores her work and her relationship to this part of England. Check out the five Austen portraits (people still aren’t quite sure what she looked like) and a surviving manuscript in her own hand (such tiny writing).

The Chawton House Museum typically gets 30,000 visitors a year, this year that is expected to double. At the library nearby, scholars come to do research and school groups come to learn about 18th-century customs at the home where Austen likely attended parties. Come just to walk in the beautiful gardens, including a new one inspired by Elizabeth Blackwell’s guide to different plants and their uses in medicine. Blackwell, the first woman to receive a medical degree in the United States, painstakingly drew each plant, engraved the copper plates for printing and then hand-colored the images. It was published in installments from 1737 to 1739 and was successful enough to win her husband’s release from debtor’s prison, though the marriage ultimately failed.

True Austen fans will want to go for a long walk in the countryside (Austen was a big walker) and see the house where she lived in Winchester (No. 8 College Street) where she lived the last two months of her life, though it’s not possible to go inside. She had come to Winchester to seek treatment for her undiagnosed illness — even today scholars don’t know what ailed her — possibly Addison’s disease or a blood cancer.

At the Mysterious Miss Austen exhibit, visitors are invited to explain what Austen has meant to them:

“Pride and Prejudice was one of the first books I simply couldn’t put down,” one wrote.

“I named my cat after my favorite literary character, Mr. Darcy,” said another.

“She was a role model for the past and future,” said a third.