Watch for whales, seabirds and penguins on icebergs 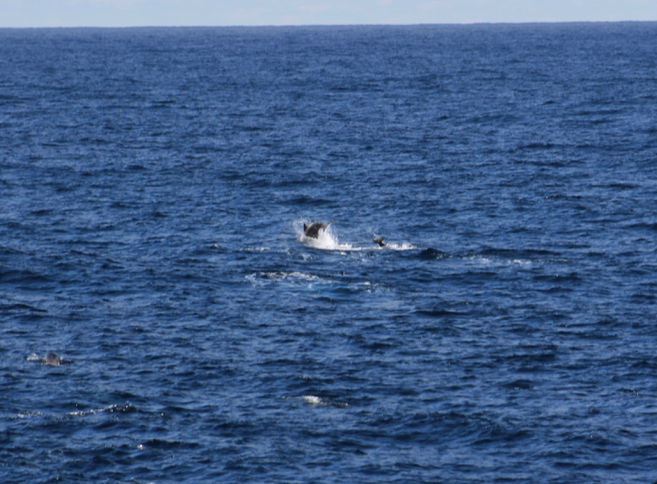 Adults and kids alike on the Abercrombie & Kent trip aboard Le Boreal are on deck, bundled in parkas and hats as we pass a giant iceberg where Chinstrap penguins – so named because the look as if they have a little black chin strap — are slipping and sliding in the snow. Their tracks do indeed look like first tracks at a ski resort down the slope after a big storm; there are piles of snow as if they have made snowmen.

“Every day there is something new to see,” said Sean, 15, from San Diego, who is especially fascinated by the whales. This morning before the Penguin snow resort, we sailed by a pod — at least 100 strong — of Long-Finned Pilot Whales weighing as much as 2.5 tons and more than 20 feet long.

“This is a trip I’ll always remember because we are in such a remote place. It’s important to take in as much as possible because we might never come here again or it will all be changed,” said Logan, 14, currently living in Shanghai with his family.

“I like sea days because you can nap,” suggested Kyndall, 18, from Minneapolis. But not really when there are whales and birds to see from the deck, and lectures to make the most of your experience — this morning on whales and penguins we will see in Antarctica. Watch them stealing stones from each other’s nests,” says Rich Pagen, the A&K bird expert on board. “They may be just stones to us, but they’re the most important penguin currency.”

How many birds can you count? Pagen explains “GISS” to the young would-be birders on board – General Impressions of size and shape – a different shaped neck on the Southern Antarctic Fulmar than the Cape Petral; different color wings on the Antarctic Prion (grey) as compared to the Snow Petral (white.)

“Before this trip, I never paid attention to different species of birds,” said Kevin, outside on deck with the group as they tried to count the different species they could find. “Not that many people see birds in this part of the world,” said Jeff Manker, A&K’s Young Explorer leader and California high school science teacher who developed the state’s first orthnology course. He said the kids’ research could be submitted through an “ebird app” from Cornell University.

The kids, surprisingly, don’t seem to mind being unplugged and are teaching each other new card games, playing truth or dare and board games. “There’s a lot of social stress with texting and replying,” Sean explained. “There is a lot of pressure to keep up…you don’t think you want to be unplugged but once you are, it’s a relief,” he explained.

Then there is a Mocktail lesson taught by Bar Manager Ludo Janeczek who set it up just as he had yesterday for the adults learning to make Pisco Sours. This drink — Pirates of Antarctica — is a multi-hued confection with a cranberry jelly, mango puree and pineapple juice, kiwi and coconut powder to rim the glass. The kids shake, muddler and stir, garnishing their drink with pineapple and a maraschino cherry. They measure amounts in a jigger and end with a drink that is red, green and yellow. .

So far, that could be said for the entire trip, they agree.