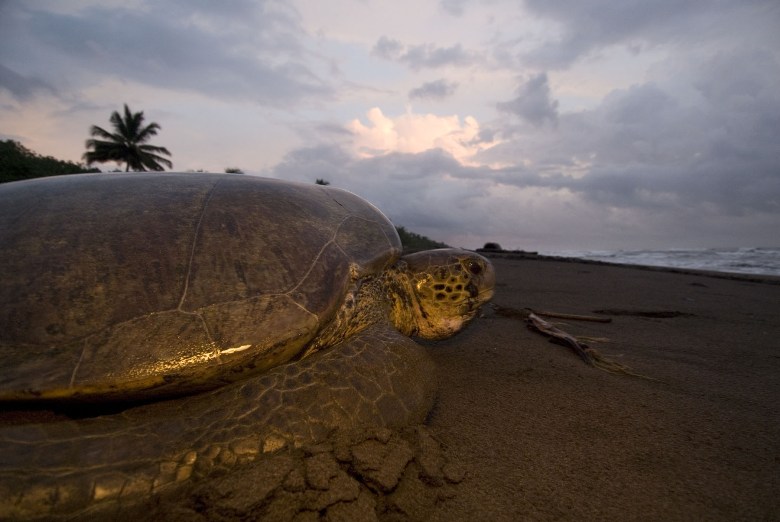 The 21-mile stretch of beach in Tortuguero, Costa Rica is one of the largest nesting sites in the world for Green Sea Turtles.

The beach is pitch black, except for the light from the stars dancing across the sky. The ocean waves pound. And right in front of us, a huge (more than 300 pounds and three feet long!) Green Sea Turtle methodically drops her eggs into a nest she’s dug deep in the black sand — more than 100 eggs in just a few minutes.

We’re on the 21-mile stretch of beach in the tiny northern Caribbean village of Tortuguero, Costa Rica where more Sea Turtles nest — most returning to the beach where they were born — than anywhere else in the Western Hemisphere — more than 80,000 Green Sea Turtles lumber up onto the dark beach, their tracks resembling those left by tractor tires, to leave some 800,000 eggs each year, says Dan Evans, a spokesman for the Caribbean Conservation Corporation (www.cccturtle.org), the leading research organization for these ancient creatures, which runs research projects here.

Tortuguero — the name means “place of the turtles” — is home to three species that nest regularly; greens, leatherbacks (the largest sea turtle species, up to 1,000 pounds!) and hawksbills. During nesting season, which is different for each species, but can run anywhere from March to October, turtles will come ashore several times to lay their eggs and then they’ll skip a year. Evans believes this skipped year is most likely related to food availability. During the nesting season, he says, “the female does not eat, so during her off year (or two for some species) she must find enough food to replace all the nutrients she used producing eggs, plus build up enough to do it all again.” Many of the nesting turtles have been tagged for research purposes.

We are only permitted on the beach in organized tour groups and the rangers permit us in groups of 10 to come fairly close, as long as we are quiet. “I’ve been doing this for 11 years and every day it’s different,” says our guide Heidi Saborio. (Many of the lodges in this remote region arrange beach tours as part of a package. We stayed at the newest lodge here, Pachira Lodge (www.pachiralodge.com), where we went to sleep to the cacophony of howler monkeys outside our cabins. You can also get information on arranging these night tours at the Tortuguero Information Center (www.tortuguerovillage.com) in the tiny village. The entire beach and most of the surrounding lagoons are part of the Tortuguero National Park, which is best seen by boat tour — again typically arranged where you are staying (www.visitcostarica.com).

As we stand in the dark, humid night, wiping sweat from our eyes, even the most blase teen in our Thomson Family Adventures (www.familyadventures.com) group is wide-eyed as we watch a turtle drop round white eggs one on top of the other. (The eggs are leathery rather than brittle, our guide explains, so they don’t break.) It’s sobering to learn that only one in 10,000 eggs will survive to adulthood. When the turtle is done, she flicks her fins and begins to cover her three-foot-deep nest with sand and returns to the water.

The kids giggle when we get sprayed with the flying sand. “It was scary at first because it was so dark, but it was really cool,” said 8-year-old Sarah Kate Garrett from Savannah, Ga. “A lot of people don’t get to see that.”

In fact, we were pretty lucky to see a turtle nesting at all. We were told that more than half of those who head out on these evening turtle walks see nothing.

I stand on the beach feeling privileged, remembering another isolated beach on Costa Rica’s Osa Peninsula where we happened upon just-hatched baby turtles, as they struggled to make their way the few yards from nest to ocean. Most don’t survive or even make it to the water and, years later, my kids still wonder if any of “our” turtles made it. (Check the Caribbean Conservation Corporation’s Website (www.cccturtle.org) to see who’s ahead in the first-ever Tour de Turtles marathon, which tracks nine turtles as they migrate hundreds and even thousands of miles from their nests to their feeding grounds.)

Dan Evans of the CCC notes that while it is rare to see sea turtles nest or hatch, you may have a chance to observe them in their natural habitat whenever you visit somewhere tropical — Hawaii, Florida, Bermuda, for example. (For locations in Florida, visit http://www.myfwc.com/seaturtle/Education/Sea_Turtle_Watches_List.htm.) If you’re visiting somewhere else, check to see what turtle programs are offered in that area.

But why should we care about these weird-looking creatures that have been around for millions of years? The Caribbean Conservation Organization maintains that they play a big role in coastal ecosystems, eating sea grass and algae, depositing their eggs on shore where they transport nutrients from the ocean to coastal and inshore habitats; sea turtles are important strands in the web of ocean life.

Sea turtles were once so abundant that they traveled in fleets. Today, experts estimate that the population is endangered because so many were hunted.

The Caribbean Conservation Organization’s efforts over the last 30 years have helped nesting increase more than 400 percent here. (If your child is at least 14 and loves marine biology, your gang can sign on to help do turtle research during nesting season. (Costs start at $1,399 for nine days.)

During our night on the beach, we struggle against the impulse to reach out and touch the turtle’s shell, or an egg. It’s against the law. The rangers don’t even permit us to stay as the mama turtle finishes covering her nest. She will leave her nest and return to the ocean. No parenting required here!

It’s been a couple of months since that night and those eggs have hatched. Let’s hope at least some of them made it to the water. We’re rooting for them.

WHAT YOUR FAMILY CAN DO TO PROTECT SEA TURTLES

— Reduce the amount of plastic garbage you produce. It may end up in the ocean.

— Don’t release helium balloons. Like trash, they may end up in the ocean and sea turtles mistakenly eat them and die.

— Reduce chemicals and fertilizers. They may get washed into coastal lagoons.

— Send an email to your local editor and congressman about the importance of sea turtle conservation. See the educator’s corner with programs for kids at www.cccturtle.org.

— Adopt-A-Turtle (www.cccturtle.org). (I did.) You’ll hear if your tagged turtle is spotted and your $25 donation will support research and conservation efforts.

There’s a lot more on our Costa Rica adventure in the “Travel Diary” section of this website.