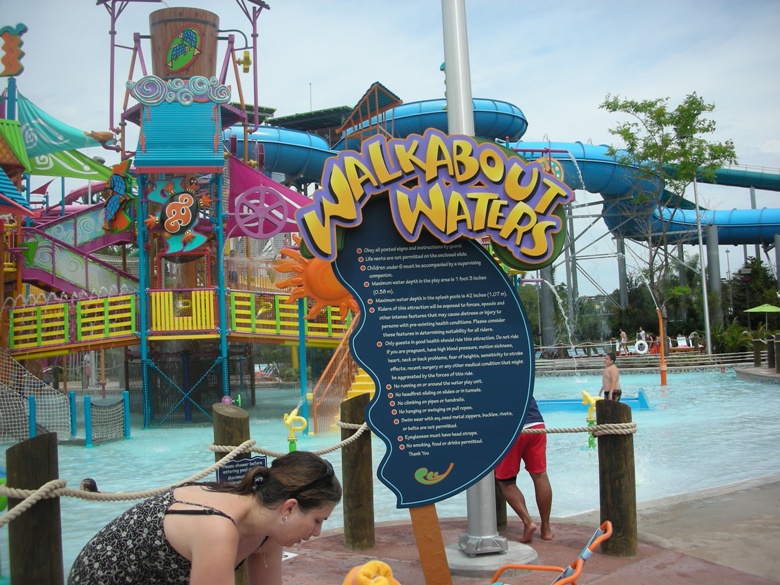 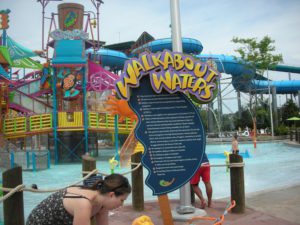 If it had been a blue-sky-sunny kind of day, Aquatica, SeaWorld’s new park in Orlando, would have been packed — so packed that the park has been at capacity by 11 a.m. on weekdays.

“This is our third try to get in,” said Laura Goguen, from Wellesley, MA, who had stopped with her family on their way to the airport.

Open just a month, it’s easy to see why SeaWorld’s latest venture is already a hit with 36 (count em!) water slides, six lazy rivers and lagoons, plenty of man-made sand beach (no one fighting over chairs for once) and two first rate areas for younger park goers complete with gentle slides, climbing nets, water cannons and giant water buckets that dump water on the little guests seemingly on cue.

Did I mention the Commerson’s dolphins? They are found in the southeastern United States and in the park’s signature Dolphin Plunge, where you catch sight of them as you slide down a tube through their habitat. I visited with five year old Ethan Sitzman and his dad Mike. Ethan gave Aquatica thumbs up except, for the birds that kept landing on the table where we were trying to eat lunch.

“My kids are little fishes and there is a lot to do,” said Nancy Ryan, from Philadelphia who said her grade schoolers prefer Sea World next door and water parks to theme parks. Besides, this is more relaxing, she said. “It’s rush, rush, rush at home,” she said. “I don’t want to make vacation a big rush too!”
Parents seemed to be enjoying themselves as much as the kids — snoozing on the beach chairs, as well as flying down the water slides with the kids. Luckily it wasn’t too hot or too crowded.

The water park boasts that it has the only side by side wave pools that can operate together and independently.

Aquatica is the third Orlando SeaWorld Park, joining SeaWorld Orlando (ready to see Shamu?) and Discovery Cove, with up-close animal interactions with creatures including Atlantic bottlenose Dolphins, rays, tropical fish and birds. Aquatica is the first attraction to open in Orlando since Discovery Cove eight years ago. All three parks are nearby. In fact, we sent my cousin Jayme and three year old Hannah over to Sea World while we explored Aquatica because Hannah had an ear ache and couldn’t swim. Sometimes, it’s prudent to divide and conquer on vacation — as long as you’ve got enough adults to go around!
“They’re all off having a ball,” said Grainne Keegan, whose family is from Dublin and was thoroughly enjoying a little “me” time while her kids were exploring the park with their dad.

“This is a great break from the theme parks,” agreed Susan Frontain, who is from Tysons Corner, VA, and was watching her nine year old son play in one of the areas designed for younger kids. She’s a fan of SeaWorld too. “This is much more relaxing than the theme parks,” she says. “It’s a nice complement.”

A word of caution: Besides plenty of sun screen, make sure to get here early — by 10 a.m. — or you’ll risk the chance of being turned away if the park already is at capacity.

And don’t opt for the all-you-can-eat buffet. Lunch goers said they were disappointed in the quality of the food, not to mention those pesky birds.

If it’s a hot, busy day, you might want to consider springing for a cabana. Sure it costs more, but you know you’ll have chairs in the shade, a small fridge stocked with soft drinks and a waitress ready to bring you snacks and lunch “They even sweep up after us,” said Sharron Perry, who had come from Jacksonville, FL with her two kids and a friend of her son “It’s worth it,” she said. “The kids think the park is awesome.”

Check out the animals too — have you ever seen a giant anteater, laughing kookaburra, sulcate tortoise (they reach 200 pounds!) or a spoonbill, among others. The kids might notice them — if you can get them out of the water!