We ski through a tunnel from Jiefenbach to Rettenbach 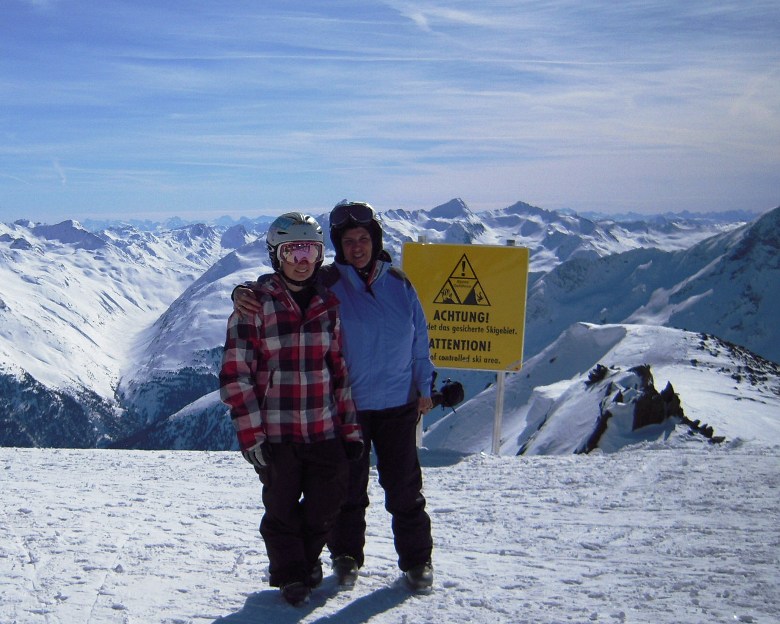 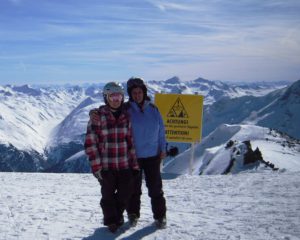 Mel and Eileen atop Alps

Can a ski trip get any better than this?

Did I mention our Austrian ski guide Bernhardt Kneissl who has been teaching and guiding here for 43 years — since he was 17? He doesn’t speak much English and my daughter Mel and I no German, so it makes for an interesting day.

We are in Solden, at 1,377 meters one of the leading ski areas in Europe. It is also home to two glaciers where we are this sunny morning.

We ski through a tunnel from Jiefenbach to Rettenbach. I’ve never seen such wide open slopes — no trees, no houses, just field after field of fresh snow, the craggy Alps in the background. This isn’t really tough skiing which suits me just fine. Mel and Bernhardt take a couple of steeper runs without me and go off-piste for the fresh powder. It’s not hard to find.

The trails are also much better marked than I expected — by numbers rather than names and by color designating level of difficulty — so it is much easier to navigate on our own than I would have thought.

I’m glad we have Bernhardt with us today because the mountain is so big! I don’t even know if I could have made it to the glaciers — taking first a gondola, then lifts….

There are amazing platforms that jut out 30 feet or so for the most spectacular views. Our guide tells us we are looking at Wildspitze. At 3,753 meters high it’s Austria’s second highest peak. In another spot he points to the Italian Alps. In summer, Italy is less than a half hour drive from here — maybe an hour in winter.

All around us people speak German but enough English so we can have a conversation on the Gondola — one man from Munich tells us he’s going to visit his daughter working as an AU PAIR for a year in Alexandria, VA. His friend jokes about his 49ers football hat that a friend brought him back. Everyone thinks it is a good time to visit the states because there are such great travel deals.

I feel like we’re getting a pretty good deal here. Sure it’s a longer flight — but actually not much more than it cost us to fly from New York to Colorado in February. And lift tickets are as much as 40 per cent less. Wine and beer is cheap too — maybe $4 a glass.

But being here is more than the deal. It’s experiencing a different culture. I think that when we stop — finally — for a late lunch at one of the famous mountain huts here Heide Alm (the same family owns one of Solden’s many affordable pensiones www.waldesuch-soelden.com). We sit in the sun admiring the Alps and eat maybe the best lunch we’ve ever had in ski country — Melanie tucks into crisply fried schnitzel on top of French fries while I eat freshly made soup with salad that includes all the little salads Austrians are famous for — carrot slaw, bean salad, corn salad. The bread, of course, is freshly baked. And lunch costs less than it did last month in Colorado. An Austrian flag flies while little kids play under it while their parents eat, building a snow fort.

And then there is the spectacular scenery — no expensive houses or condos on the slopes, just mountain vista after mountain vista. No trees either, just craggy snow covered peaks as far as you can see.

My 18 year-old daughter Mel — an avid skier — had begged me to bring her here in winter when we visited last summer but she won’t stop to pose for as many pictures as I’d like. “It’s all the same,” she complains. It’s just that one view is more beautiful to me than another.

And the day is one for the memory books.

We finally ski down a little after 3:30 p.m. ready to hit the spa — the wellness center here at the Hotel Regina (www.Hotel-Regina.com) where we’re staying about a two minute walk from one of the town’s gondolas.

I warn Mel that this is Europe, which means the spa is coed. While people cover up with towels in the sauna and steam, it’s not unusual to see men and women naked — especially from the back. “We’re very comfortable with the human body,” the masseuse told me yesterday. The first-rate massage, by the way, was half what it would cost at a US resort hotel.

I love this place — and we’ve barely explored the village.