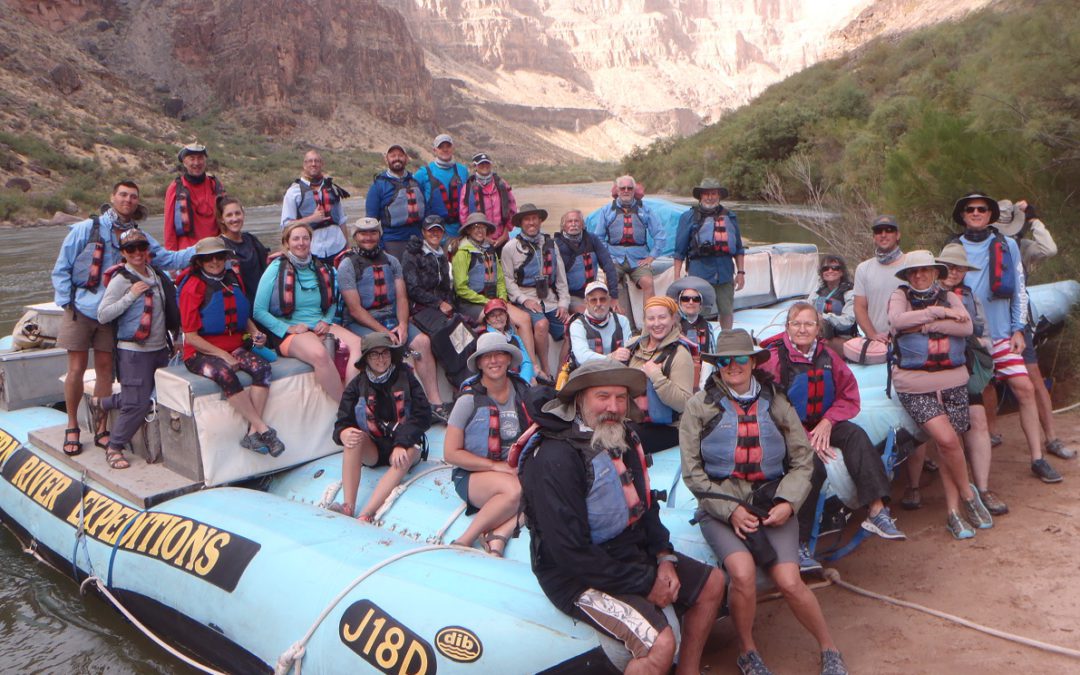 DID YOU KNOW: Desert Big Horn Sheep are seen more frequently in the Grand Canyon now that their major food source competitors—wild burros—have been removed. Great Blue Herons, seen everywhere in the canyon, are America’s largest herons. Ravens, often working in pairs, have been known to unzip campers tents and bags and pilfer their belongings!

“Take some of the peace of the river with you…Be kind to yourselves and to those around you.” Ben Bressler, Western River Expedition Leader, Sept. 2020

It was supposed to be easy.

Up with the sun, quick breakfast and then a short last ride on our Western River Expedition rafts to the Whitmore Helipad where at 8:30 a.m. we were to be whisked by helicopter from the Colorado River up to the Bar 10 Ranch for a shower, lunch and then a chartered flight. Some of us were returning to Marble Canyon, where we’d spent the night before starting this 7-day adventure, to retrieve our cars. Others were going to Las Vegas, about an hour flight, to connect to flights home.

We had all chosen this trip because we wouldn’t have to hike out of the Grand Canyon, as is the case on other week-long trips.

But we all know what they say about the best laid plans… We woke to a veritable sandstorm with sleeping bags and chairs flying. “Like out of the Wizard of Oz,” one person said.

A strong cold front was moving through after a week of temperatures around 100 degrees. In addition, smoke from the West Coast wildfire was beginning to seep into the canyon, creating a thick haze.

Then the bad news… Our Expedition Leader Ben Bressler reported that the helicopters weren’t flying because of the wind and limited visibility caused by the horrific wildfires.

We did our best to be cheerful, as did our guides, despite the blowing sand and how much we had been looking forward to a shower. Only once in his 20 years working for Western River, Bressler said, had a trip been extended overnight in the canyon.

Would this be the second time? We knew the crew was picking up guests for a three-day trip—they would be flown in on the helicopter as we left–and it was to be their final trip of the season.

Finally, Bressler decides to get us all out of the blowing sand and takes us to a somewhat sheltered cove just downriver. When we learn about 11 a.m. that it is still going to be awhile, our guides pull up to a beach to serve us the lunch that was meant for the new guests. They in turn, would be served our lunch at the Bar-10 Ranch, where they too were waiting for the helicopters.

But nearly as soon as the guides get out lunch fixings, Bressler gets a message that we need to get to the helicopter pad. We eat quickly and hurry over there.

Hurry up and wait! A helicopter came and grabbed another trip’s bags—they had been in line to leave before us early in the morning—and then said they were going to suspend the flights until the weather got better.

That group decided to hike out of the Canyon on Whitmore Trail, a steep, rocky trail—no easy feat with an elevation gain of more than 1,000 feet. That really wasn’t an option for us, though, as we still had our 20-25 pound duffels and few of us could manage the hike and the bags.

We sat on the beach near the helipad wondering would we be spending another night camping? What would happen to the other guests?

Finally! Five hours after we were scheduled to leave, the helicopters started to fly again, taking two or three passengers at a time rather than four because of the conditions. They brought in the arriving guests, who looked a bit bewildered. “You’ll have a great time!” we assured them.

Ben Bressler looked relieved. “I hope you can take some of the peace of the river with you,” he said.

That same night, we got emails about our “long exit from the Grand Canyon” from Western River Expeditions president Brian Merrill. “For all of our efforts to control and plan every detail of our river trips, some things remain beyond our control,” Merrill wrote. “This is a simple note to thank you for your patience and understanding.”

While it can be disconcerting when things don’t go as planned, Merrill suggested, “Unexpected challenges can be part of the adventure.” Absolutely, Brian—and one more story for us to tell!