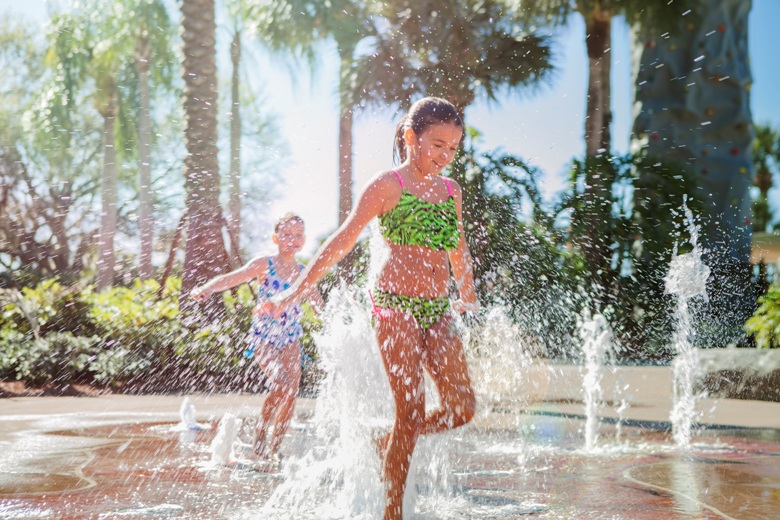 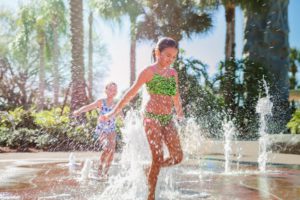 “So much for hanging out at the pool!”

The rain gave no sign of letting up. Even worse, we’d chosen the Hyatt Grand Cypress in Orlando because it’s got a new water play area — big new waterslide and 1,500 acres with put-put golf, tennis, a sandy beach with paddle boats and a s’mores pit — everything for outdoors fun and games when you’ve had enough of the theme parks.

Now it’s not only raining too hard for the pool but too hard to brave the theme parks, though we know the lines will be short. Our waterproof rain jackets are still soaked from the previous night. Welcome to Orlando during a tropical storm.

Weather, of course, is the one thing you can’t control on vacation. (Smart move to get travel insurance if you think a hurricane might derail your plans. Look for policies like those from www.travelguard.com that insure kids free.)

Sometimes you can just shoulder on with an umbrella and a good rain jacket, especially when your time is short. “We’re not made of sugar, we won’t melt,” said Arlys Pellegrino, here with her husband and two daughters from Colorado Springs. They were determined to hit the theme parks anyway. They were going to Epcot, reasoning there would be plenty of indoor attractions and restaurants for a long lunch. “You can’t let the weather stop you,” said Pellegrino. Besides, she added, looking around the Hyatt’s spectacular lobby, “How can you be sad in a place like this?”

But sometimes when the weather interferes with your plans, it’s best to move on to Plan B. Rain has sent us racing to the nearest B-and-B when we were camping in New Hampshire. (A hot shower never felt so good!) We literally flew to Oahu when the forecast was better there than the continued wet weather we were experiencing on Kauai. We’ve hit children’s museums (you’ll find one nearly everywhere www.childrensmuseums.org) and opted for factory tours when the rain chased us indoors when we planned to spend the day outside.

Of course, I think the kids’ favorite rainy day on vacation was the chance to order room service and watch a movie.

The key to keeping weather from derailing your plans: Make shifting gears part of the adventure. No whining allowed — from grown-ups either!

Hotels can help. When we were in Orlando, The Hyatt Grand Cypress added indoor kids’ activities (hula hoop contest, anyone?) The Loews Hotels at Universal Orlando adds indoor movies. Don’t be shy about asking the hotel or resort to provide indoor activities — complimentary, of course. 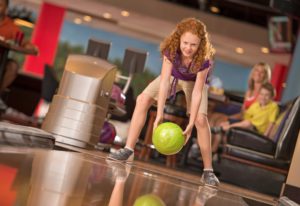 There are some pluses to a rainy day — more time to sleep in, especially welcome after leaving Disney World at midnight the previous night. There’s also more time to shop. In Orlando, there are more than 1,000 stores to choose from — three major indoor malls and three outlet malls, as well as Downtown Disney with the largest Disney store in the world. “We’re having to get a new suitcase for all we’ve bought,” laughed Fiona Cartwright, here with her family from England and planning another rainy day shopping excursion.

Let’s not forget museums. Yes, Orlando is home to many. There is everything from WonderWorks Orlando and the Orlando Science Center with a Kids Town for kids under 48 inches tall (ready to explore what’s under a city street?) to the Orlando Museum of Art with drop-in classes and the Mennello Museum of American Art.

Less than an hour’s drive is the Kennedy Space Center Visitor Complex, which has just unveiled a new huge Space Shuttle Atlantis attraction with more than 60 interactive exhibits.

We thought we’d try Disney Quest at Downtown Disney with five floors of interactive fun, including the chance to create your own CyberSpace Mountain that you can try out in a simulator. Unfortunately, a lot of other people had the same idea. The place was filled to capacity with a long line of people in Disney ponchos waiting in line.

Ditto for the new Splitsville bowling alley at Downtown Disney. We could have gone to the movies but instead we opted for a long lunch — there are many restaurants to choose from in Downtown Disney — and then headed to the new Senses spa at the Grand Floridian Resort. While I get a massage, my cousin and her 8-year-old daughter get mom-and-daughter mani-pedis, which come complete with tiny mouse ears on your big toe.

“A new rainy day alternative,” said Kristie Johnson, who with her mom and friend opted for spa treatments for themselves and pedicures for their 8-year-old daughters.

You’ve got your pick of 19 spas in Orlando, including another V Senses Spa about to open at Walt Disney World at Saratoga Springs Resort and a growing number that have special treatments for kids like at Nick Hotel, as well as hair braiding and air brush tattoos. The Ritz-Carlton Orlando offers treatments ranging from a teen facial to a princess fizzing pedicure with plenty of options for moms and dads too.

The weather can be an excuse to try something you’d never done — like sky-diving. Well, you are actually at an indoor simulator at iFlyOrlando, but you’ll feel like you’re sky-diving. Even preschoolers can try it.

Amanda Li, 8, here with her mom from San Diego for a gymnastics competition, wasn’t going to let the rain keep her inside. As long as there was no thunder or lightening, she declared, she was going to the pool. “You’re going to get wet anyway,” she said.