When a hotel is more than just a place to sleep 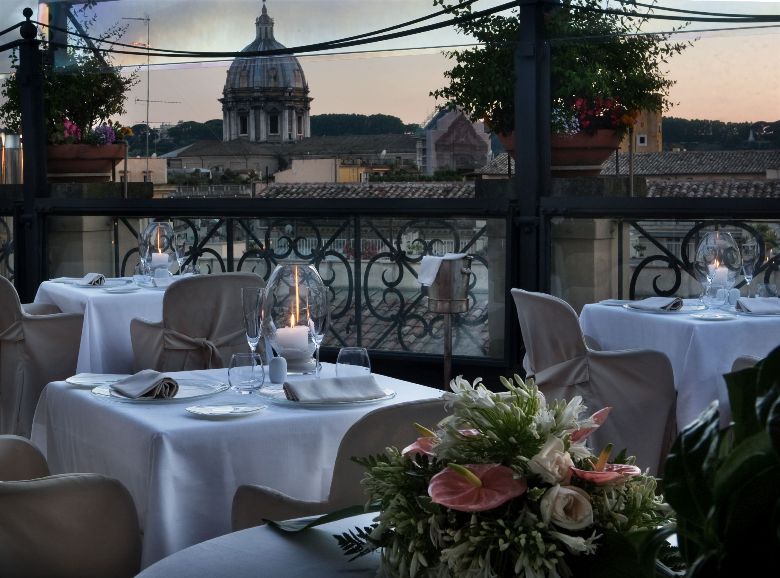 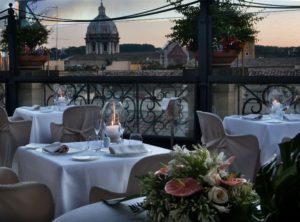 The hotel terrace in Rome was festooned with flowering plants and overlooked the Pantheon and the square housing Bernini’s famous elephant sculpture. Scanning over the ancient rooftops as we were served drinks and elaborate snacks (olives, fried vegetables, dainty chips), it felt as though we could reach out and touch the Pantheon’s dome.

Could the setting be any more perfect?

It had been a long wonderful day walking all over Rome and touring the Forum and Coliseum. I was glad to finally sit down. That we were in such a spectacular spot, the rooftop of the historic Grand Hotel de la Minerve, certainly was a bonus, especially since it was my birthday. My husband asked, “Could I have had a better birthday?”

I didn’t think so, which led me to ponder how a hotel can be more than just a place to sleep, especially when you’re celebrating. A hotel can be a big part of the experience — from check-in to the bountiful breakfast buffet, in our case with fresh mozzarella, fresh ricotta, fresh fruits, croissants filled with cream and chocolate, cheeses, salami, ham, eggs and, of course, cappuccino. The food was so irresistible I made sandwiches for the plane trip back to New York. (I think of that breakfast when I’m grabbing a bowl of cereal at home!)

The Grand Hotel de la Minerve, first built in 1620 for the Fonseca family, was converted to a hotel at the end of the 18th century. It later became popular with young, well-heeled travelers and their chaperones embarking on their “Grand Tour.” In 1891, a winter garden was built in the hotel’s inner courtyard and today it has a spectacular crystal ceiling, along with a statue of Minerva, the Roman goddess of wisdom and war. Guests gather there for tea or coffee, just as they did so many years ago.

I tried to imagine all of the young Americans with their chaperones and all of the intellectuals, high-ranking prelates and artists sitting around the hotel. Were the teens bored with all of the Great Sites and grown-up conversation? They were probably just as glad to meet other young Americans or English speakers — as we are today when we trade travel tips with other guests.

Where you sleep, eat breakfast and meet other travelers, after all, can be just as memorable as what you’ve seen that day and that doesn’t necessarily mean the hotel has to be the most expensive one in town either. For your traveling college kids, it might be a hostel overseas. It might be a tent in Tanzania (on the way up to Kilimanjaro in our case) or a remote camp on Lake Yellowstone, arranged by Austin-Lehman Adventures, where we had to navigate over fallen trees to the privy. The kids thought it was a terrific adventure. Some of my kids’ fondest childhood memories are of the weeks we spent ensconced in a cabin at Ludlow’s Island Resort on Minnesota’s Lake Vermillion.

The right environs can prove the antidote to bad weather or even an illness that could derail a trip. When blizzard conditions kept us off the slopes, we huddled together during a frightening thunderstorm in a cozy cabin at Grand Teton National Park and watched the rain fall from a Big Sky Montana condo. And I’ve nursed earaches and stomach bugs in more hotels and rental condos than I care to remember.

We’ve stayed in a castle in Wales (where the owner invited my 5-year-old daughter to share fish fingers and watch cartoons with her granddaughters while we went out to dinner) and at bed and breakfasts in Maine where the company of other travelers de-stressed the college hunt. A charming apartment in Paris let my 12-year-old daughter and her friend scope out the best place to buy croissants.

Returning to the same place you loved, however, can sometimes be dangerous, though I’m glad to report that the small Caribbean resort where we honeymooned and have vacationed since — Curtain Bluff  — is still wonderful. (Check for good early-winter deals that include a free night.) But while on a sailing trip, when we showed the place to our kids, young teens at the time, they weren’t impressed.

One person’s favorite place, of course, may leave another cold. We’ve certainly had our share of duds, like the place in Australia that looked nothing like its website photos and where my son’s laptop was stolen while my daughter was asleep in the unit. Scary! We decamped the next day.

Of course, sometimes it’s more about the occasion and who you’re with than the hotel, as I discovered when my husband’s family gathered in Champaign, Ill., recently for a nephew’s wedding. The bride and groom are both in the military stationed in the Midwest. We all stayed at the local Homewood Suites by Hilton (www.homewoodsuites.com) — ideal for traveling families because of the roomy suites with kitchens and the complimentary breakfasts.

The hotel was comfortable but certainly not fancy. It didn’t have the ambiance, say, of the Grand Hotel de la Minerve, but it was perfect for our gang. Those breakfasts gave the aunts, uncles and cousins a chance to catch up informally without fretting over who was going to pick up the breakfast check, or whether everyone was even ready to leave for breakfast. People wandered downstairs at will and joined us in the living room-like breakfast area where we commandeered a big table and put small ones together without anyone minding. Before the official festivities — the rehearsal dinner, the wedding — we were all able to gather in our suite for conversation and cocktails. We joked that as is so often the case, the informal gatherings were the best part of the weekend.

And just like in Rome, the hotel proved more than a place to sleep — a lot more.