When in Rome consider a private tour

If there is ever an Ancient Site to use your imagination, the Coliseum is it.

No wonder kids (especially boys) love it. Gladiators fighting till the death! Exotic animals fighting each other and men… screaming fans—tens of thousands—who have come from all around the Roman Empire for the spectacle. 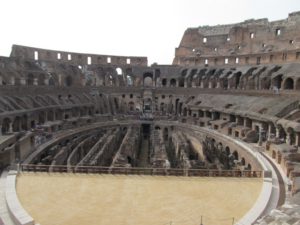 Today of course, it’s just a relic of its ancient glory but our guide Maria Visco says this is one place it isn’t hard to engage kids’ imaginations.  “They know a lot about it before they come,” she says.

We’ve opted to tour Ancient Rome –the center of the Empire for some 500 years–with a guide both to maximize our time and to avoid the lines where we’d have to wait at least 45 minutes to get in. We start at the Pantheon with its giant hole in the middle (and drains in the floor for rain). Raphael is buried here as is Queen Margarita, who kids will like to know was the inspiration for Pizza (the Neapolitans invented it for her visit—representing the red, white and green of the Italian flag). Today the American Embassy is housed in what was once her palace.

Sure the Pantheon is better preserved—it is used today as a church—and the Forum historically important, but the Coliseum is the largest surviving structure from ancient Rome and inspires all of our imaginations.

The Coliseum is known for its size and of course for the ceremonies and games that on occasion went on for 100 days. It’s amazing that this place took less than a decade to build and opened in 80 AD on what was once Nero’s palace. We try to imagine what it must have looked like when the brick walls were covered with white marble blocks that were bound together by metal clamps (today we see big holes in the walls where the metal was taken out).

There is a complex system of passages and rooms underneath and elevators that hoisted the wild animals up to the coliseum floor.  They were lowered and raised by pulley systems.

At one time, there might have been 300 animals in the arena—bears, horses, boars, wolves, lions… the gladiators might have been slaves but some were as celebrated as football and soccer stars today.

We visit the Roman Forum—the commercial, religious, political and legal center of the city with its Via Sacra that crossed the whole length of the square. Kids love jumping on the ancient stones of the roadway, Visco said, where you can still see the marks from the Roman Chariots. Mussolini had cut through the Forum to build the road and in so doing, uncovered even more ruins.

Visco shows us how churches and buildings were simply built right on top of the ancient Roman ruins.

Apparently in the day this was the place to be whether cremating Caesar (we visit the spot where it is thought to have happened or discussing the day’s events in the Senate or gossiping, this was the center of Roman Life.  Sure it is just ruins, an arch here and there, but it is amazing—tell little girls about the Vestal Virgins who were taken from their noble families at age six (it was thought to be a great honor) to tend the sacred fire) at the Temple of Vesta.

We stand and look at the arch that says SPQR (which means Senatus Populus Que Romanus –the Senate for the People of Rome). Kids love that they can find SPOQ everywhere in Rome—on every manhole in the streets, in fact.

There are fallen pillars and stones everywhere the Santa Maria Antique, the Forum’s oldest church, dates back to the 5th Century. We see a wedding party making their way here as The Forum is a popular locale for weddings, we learn. There is the Temple of Saturn and the Temple of the Dioscuri, dedicated to Castor and Pollux and the Arch of Titus that depicts the looting from Jerusalem’s temple.

For Americans who think anything older than four centuries is “really old,” it is especially amazing. Even kids will think so.

Next:  When a hotel is not just a hotel