When someone in the family has special challenges

WINTER PARK, CO — Shannan Williams was born into an outdoors-loving Colorado family. The fact that she has cerebral palsy, is confined to a wheelchair and has trouble using her hands wasn’t going to keep her from an active life skiing, scuba-diving and rock-climbing, not to mention graduating from college.

“How could I not? My parents got married at the top of a ski mountain,” says Shannan, who is 24 and has been skiing since she was a young child thanks to The National Sports Center for the Disabled (NSCD) in Winter Park, Colorado. In its 46th year, NSCD has made such winter and summer adventures possible for thousands of adults and kids with disabilities and their families, some of whom travel from as far away as New Zealand and Japan to participate, as well as from all 50 states.

“Just being outside makes you energized,” Shannan said. “It’s so freeing to be here.” She notes that unlike her “real” life where her mobility device — a wheelchair — sets her apart, here everyone needs some sort of special equipment to get down the mountain — skis, snowboard, snowmobile.

But such adaptive sports programs are about much more than the activities themselves, says Kirk Bauer, the executive director of Disabled Sports USA, which has some 124 chapters across 42 states, including 75 at ski resorts like the NSCD, the largest and oldest program of its kind in the country. There are winter and summer programs in Park City, Utah at the National Ability Center, including camps for children and teens on the autism spectrum, in Crested Butte, Colorado at the Adaptive Sports Center and Breckenridge, Colorado, at the Breckenridge Outdoor Education Center where my daughters volunteered when they were college students, in Vermont and at neighboring Steamboat, Colorado, the STARS program inspired by the one at Winter Park.

The NSCD has programs in Denver as well, including canoe, kayak and whitewater sessions, programs for vets and special-ability clinics sponsored by Denver pro teams.
“These programs help people to believe in themselves again,” said Bauer, himself a disabled veteran. “They propel rehabilitation and recharge families who can again share experiences.” 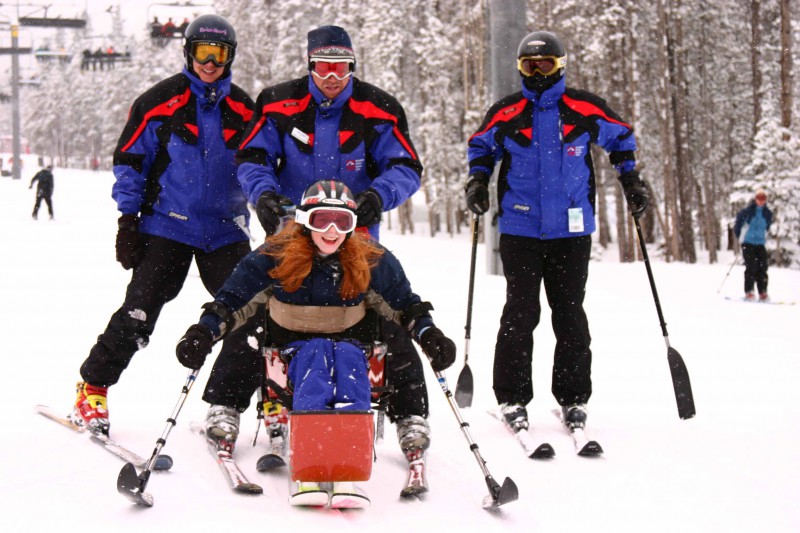 Indeed, Shannan’s mom, Julie Allen, is convinced the programs here gave Shannan the confidence and gumption to learn to scuba dive with more than 100 dives to her credit and to know that she could succeed at college. “She can’t walk, but that doesn’t define her,” Allen said. “This program has meant everything.”

That’s thanks to committed staff, trained volunteers and adaptive equipment that enable even the most severely disabled kids and adults to kayak, snowboard, rock climb, horseback ride, cycle and sail. There are opportunities to try 30 different sports around the country, Bauer said. The basics can be learned in just one day with the right equipment and instructors.

Still, “I don’t think people know all of the different types of programs we offer,” said Becky Zimmermann, the president and CEO of the NSCD, noting that no one is turned away; NSCD subsidizes 85 percent of the cost of the programs.

Too many people, adds Bauer, think these programs are only meant for elite athletes heading to the Paralympics. “You don’t have to be what we call a “super gimp,” to participate,” he said. “That’s only one percent of who we serve.”

Just ask 15-year-old Kati Leasure, who suffers from a rare genetic disorder that has caused her progressive loss of muscle control, which makes it difficult for her to speak. She’s also a cancer survivor. Here, Kati is surrounded by others who have their own challenges, as well as by professionals and volunteers who make it their mission to help her succeed.
“You never hear anyone say she can’t do something,” said Jennifer Leasure, Kati’s mom and herself a volunteer here. It’s a different world from the school district, she and her husband Wade said, where everything is a battle, which echoes what other parents told me.
“You feel so alone,” said Julie Taulman, whose son Kyle, now 14, was paralyzed from cancer at age two.
But these families aren’t alone. There are 49 million disabled Americans — nearly half with severe disabilities. That includes more than six million kids and 19 million veterans, including growing numbers suffering from Post-traumatic Stress Disorder (PTSD).
These programs not only enable them to experience the outdoors together but to connect with other families facing similar challenges. Here no one gawks. “I really don’t think I would have survived without adaptive sports,” said Taulman, who was inspired to start Steamboat Adaptive Recreational Sports at Winter Park’s sister resort in Colorado.
Kyle, for his part, was motivated by adaptive sports to push for inclusion in his school — on the basketball team and in a musical production, his mom said.
It all started when Hal O’Leary, a Winter Park ski instructor, volunteered to teach skiing to 23 children with amputations who lived in Denver. Now there are all varieties of adaptive equipment and a corps of more than 1,200 volunteers — like Bob Steketee, a retired middle-school teacher, and his two kids Nathan, 20 and Hannah 22, college students who volunteer their weekends all winter long.
They say they get as much out of the experience as those they are teaching on the mountain. “You very rarely see a negative attitude here,” said Nathan, an engineering student. “And if they’re smiling, I’m smiling.”
Hannah added that you realize that people — whatever their differences or challenges — are more alike than different. “It’s easy to see what people can’t do,” she said. “A lot of people don’t take the time to see everyone’s commonality.
Bob noted there was a lot more negativity when he was teaching middle school and he saw that his students would suffer from self-imposed disabilities by insisting they couldn’t do something rather than trying.
“The biggest takeaway is that there is life after disability,” Taulman said. “The only limits are what you put in front of yourself.”