Where Sitting Bull met Custer at the Little Big Horn 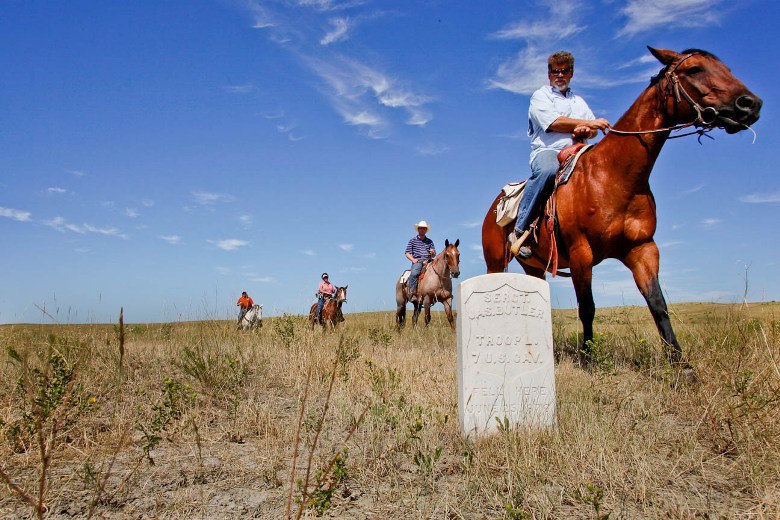 We’re back in 19th Century Montana when the Native Americans were fighting for their way of life on the Open Plains and the U.S. Cavalry wanted to secure the land for the rapidly growing expansion West.

We are on a rare horseback ride through the Little Bighorn Battlefield, a national monument, led by Chip Watt, an amateur historian who owns the neighboring 7th Ranch and  RV Camp  and offers all variety of historical tours.

I look out and try to imagine thousands of Indian teepees and 30,000 ponies on a scorching June day in 1876, just before the nation’s centennial.  Above all the tribal leaders from the different tribes was Sitting Bull ,dedicated to the traditional Indian ways and opposed to relationships with the white people, especially to life on a reservation after gold was discovered in the nearby Black Hills in the heart of the new Indian reservation and the Government did little to keep the gold seekers out. The Native Americans were rightfully furious and fed up with government promises that weren’t kept.

I try to imagine an ambitious, famous, 36-year-old  General George Armstrong Custer—some say he planned to run for President — talking to his Indian Scouts on a grassy ridge above the valley of Montana’s Little Bighorn River.  They warn him that there is a large Indian encampment but he can’t really see it.  He divides his 7th Cavalry command to strike before they can scatter.  What happens next has been debated in the 135 years since, the subject of movies and thousands of books.

We do know the Native Americans, rather than scattering as the soldiers thought they would,  stood their ground and fought as a rare unified force of several thousand Lakota and Cheyenne warriors strong.  Custer and all of his 210 men. including two brothers, a brother-in-law and nephew, died on that battlefield. Another 53 men were killed and 52 wounded in other companies, while the Native Americans lost no more than 100, quickly removing their bodies.

Some 249 headstone markers across the battlefield show where Custer’s men had fallen and were initially buried. The National Park Service now has erected red markers to indicate where Cheyenne and Lakota warriors fell.  It is an eerie site in the rolling hills.   The youngest who died at Little Big horn was 17; the oldest 56.

How or why it happened still continues to be debated, with military officers coming here to study the failure of Custer’s Strategy. Why did Major Marcus Reno, having surprised the Indian village, retreat in chaos?  Why were the soldiers—many of them immigrants who weren’t experienced horsemen or trained marksmen–so ill prepared?  What exactly happened to Custer and his men after he separated from Capt. Frederick Benteen?

Everyone you talk to in Eastern Montana’s Custer Country as a different version of the events. “It’s not black and white,” says National Park Ranger Michael Donahue. “Children need to learn that about history. There were no good guys and bad guys. Both sides were fighting for what they believed.”

Some think Custer could have succeeded had he gotten more support and ammunition. Others think he was too arrogant and impatient, wanting the glory for himself and not willing to wait for reinforcements.  While that famous “Custer luck” that made him a Civil War hero and a general in his early 20s ran out, locals say, Native Americans aren’t credited for waging a brilliant battle.

Just in the Visitor Center at the National Monument here are more than 2,0000 books debating what happened–one of the  last armed efforts of the Northern Plains Indians to preserve their way of life.

At the Visitors Center, we see Custer’s uniforms and some personal affects—his sword, shaving brush, document case donated by his wife Libby who spent the rest of her life defending his memory and fanning his legend. Remember, Custer was as close to a Rock Star as 19th Century as America had—his uniforms hand-tailored at Brooks Brothers in NYC.

Sitting Bull, for his part, was recognized as a great spiritual leader known for his bravery and prescient visions. There are Native American artifacts—a pair of beaded moccasins that are believed to have been worn by Sitting Bull, a Sioux War Helmet, a pipe pouch.

Earlier in the day, we’d stopped where the battle began at one of the strangest museums I’d ever seen — the Custer Battlefield Museum in the tiny town of Garryowen which is entirely owned by former Californian Chris Kortlander. He has amassed a spectacular collection of artifacts including Elizabeth Custer’s papers  (she was a best-selling author and her books remain in print), saddles, war bonnets, rifles, maps,  historic photographs, Sitting Bull’s death mask and pipe bag and more than 300 newspapers recounting what happened.  “This was the southeast edge of the Indian Encampment,” he tells us as we stand outside.

Inside his office, he pulls out hundreds of pages written in Libby Custer’s hand.   Mrs. Custer, who lived into her 90s, “never threw anything away,” he said. She was, the first woman ever allowed to live with an active duty military officer in the West. Later, she became an unofficial U.S. Ambassador and traveled around the world.

We’re stunned to look at a rare photograph of Custer with a dead Grizzly taken two years before the Battle of Little Big Horn. There is the only tomb of an unknown soldier outside.  The more I learn, the more confused I become about this controversial battle.

I think of what a rich heritage and a sad ending. The warriors might have defeated Custer mightily but they ultimately lost their war.  The Little Big Horn battle served to galvanize white sentiment against their cause. Within the next few years most returned bitterly to the reservations. Sitting Bull, who briefly toured as a performer in Buffalo Bill Cody’s Wild West Show, was murdered in his South Dakota cabin on the Standing Rock Reservation by reservation police in 1890. That precipitated the massacre at Wounded Knee.

Donahue says he likes to tell kids the story of 13-year-old Black Elk who fought against the soldiers. At the end of his life, he became a great spiritual leader of the Oglala Nation.  “Know the Power that is peace,” he told his people.

Those words are inscribed on the side of the visitor center—words we should all be mindful of today.

Next:  Where dinosaurs roamed the earth