“Who drives the boat when the captain is asleep?” 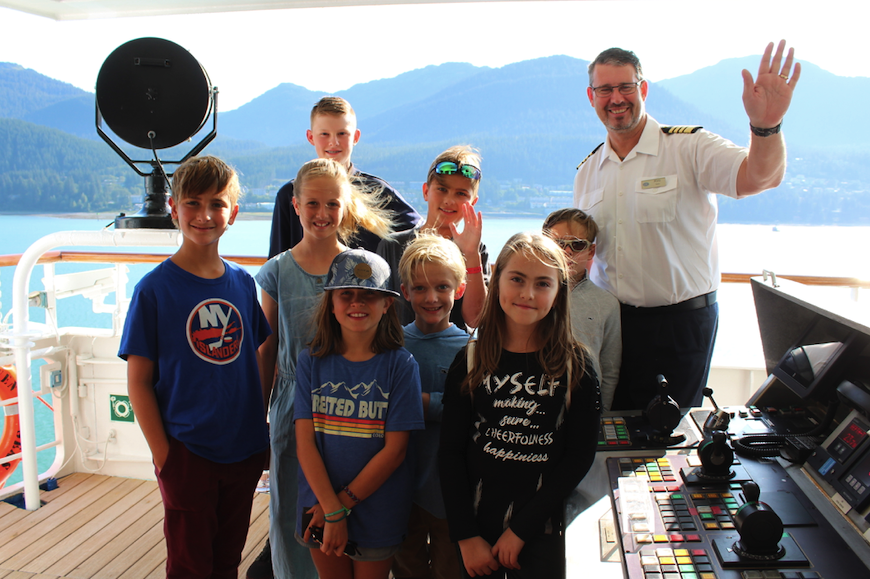 ABOARD THE REGENT SEVEN SEAS MARINER in Alaska — Stedman Grigsby was less than impressed with the steering wheel on the Bridge of the Regent Seven Seas Mariner.

“I thought there would be a huge steering wheel,” the nine year-old from Texas declared.

Of course, on a ship with 1000 people aboard, the 15 officers who man the bridge use a lot of other tools to steer the boat, Captain Avio Palm tells the kids who have been invited to visit as part of the Club Mariner program.

They are more impressed by the huge interactive map that shows all of the ships in the vicinity -– kind of like a giant video game.

Captain Palm ushers the kids outside the bridge to the “magic window,” where they look straight down all the way to the sea.

When he shows them the captain’s quarters, they want to know “who drives the boat when you sleep?” There is always an officer on the bridge, Captain Palm explains. “And I sleep with a phone by my side.”

“Where do you sleep?” they ask, noting a comfy couch but no bed visible. “Behind closed doors,” he laughs.

He explains that a Captain does a lot more than steer the ship—he must anticipate and solve problems, work hard with his officers and crew to make sure the boat gets where it needs to be on time and, above all, make sure everyone on board stays safe.

“That comes with a lot of experience—and study,” he says.

On this ship, there are 15 officers, 50 deck crew, 50 engine crew and 350 others who work in the hotel and food operation.

“The Bridge is the brain,” he tells the kids. “The ship’s engine is the heart that provides circulation and all of the crew members are the hands and the legs. Everyone has his own purpose.”