Who knows why glaciers are blue? 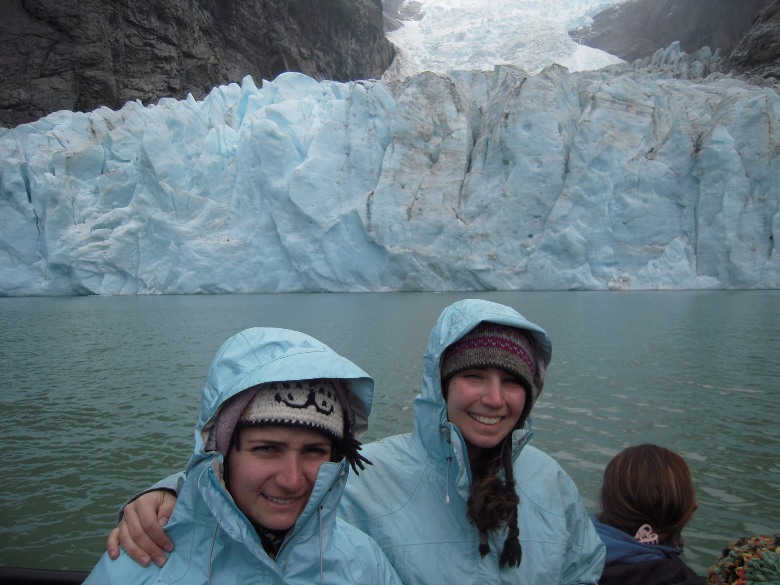 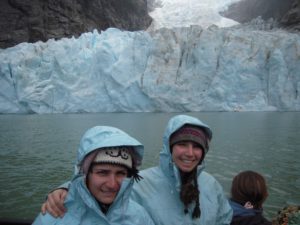 Mel and Reg at the glacier

DAY 8 — We’re in Bernardo O’Higgins National Park, the largest in Chile with several hanging glaciers including Balmaceda and Serrano Glaciers. We’ve taken a small boat from Puerto Natales, about five minutes from Hotel Remota (www.remota.cl) where we are staying  for a three-hour cruise—past a huge waterfall and condor nest!  “You read about it in books and then you can look and see it,” says Sandy VanLandingham, from Arizona visiting here with extended family.

Our guide tells us the glacier has receded considerably in 25 years, as we ride a small Zodiac to get up close and personal with the force of nature.

It has been nice after a several days of arduous hiking for a relaxing day on a boat watching beautiful scenery, being served the ubiquitous Pisco Sours, the traditional drink of Chile. Our day ends with another Patagonian tradition—a lamb BBQ. Yum!

I learn that Matias Del Sol, the engaging head guide at Remota, is the son o German Del Sol, the prize-winning architect who designed the hotel to reflect its surroundings—the white walls, the snow, the black hills, the roofs planted with grass, the ceilings that let the light through like the warehouses where lambskins were traditionally dried,  the uneven and large windows to reflect the way windows were built on the estancias in this region, the big round fireplaces like the native peoples built.  I love that the grounds have been left natural with erratic rock rather than landscaping.

“This isn’t for the guy who wants to go to Cancun,” he laughs. “It is for a certain kind of guest. After all, the distances to get here are long — a four hour flight from Santiago and then a three-hour car ride. And the distances once you arrive are long. But the journey is well worth the effort. “It is an absolutely unique place,” Matias Del Sol says. “Nature is still very untouched here and there are not many untouched places left in the world.”

He points out that 70 per cent of the excursions the hotel offers — biking, hiking, horseback riding — are just for guests here. “The idea is to share the culture,” he explains.  Indeed, there were no others when we were riding with a young gaucho on his family’s land or hiking to see a cave painting that has been here for thousands of years.

The first White settlers came here just at the end of the 19th century so this region is relatively untouched. “People need to be open to the experience!”

Sadly this is our last day in Patagonia and at Remota – tomorrow we head north to the desert, sand dunes and volcanoes.   Should be quite different.