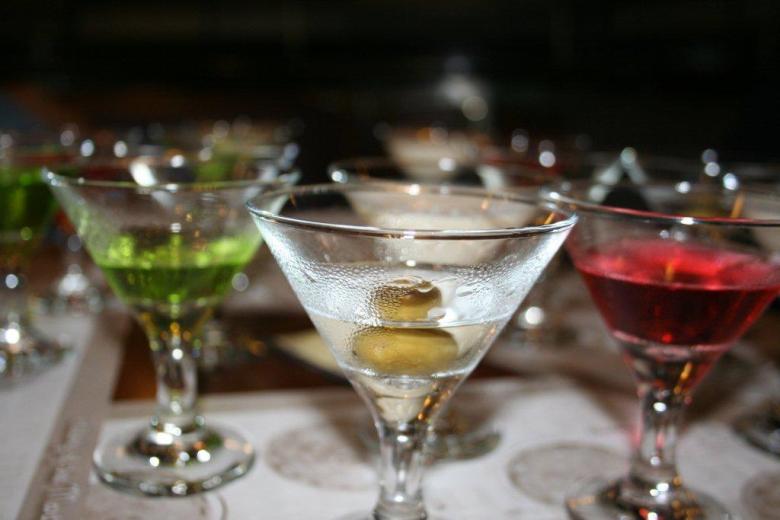 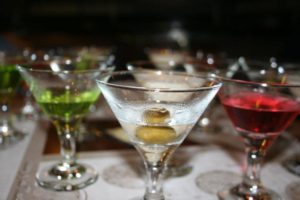 Mixology classes on the Disney Magic

We’re at Mixology 101—sold out by the way—with everyone’s kids otherwise engaged. Who knew there was a trick to muddling the mint and lime just right for Mojitos, pouring Baileys over Kahlua so it is layered, or a “Sunken Treasure” drizzled with blue Curacao on top.

Lisa and Ed Beverly’s nine year old son Raymond was happily ensconced in the kids’ program while his parents were learning the art of shaking martinis and mixing margaritas (who knew adding a splash of OJ could make such a difference?).

Arul Swamy, the bartender and a 10 year Disney Cruise veteran told us the bartenders make up special recipes to please the guests. “Check your pour,” he advises, it should be 1.5 ounces. Not the way my husband makes martinis, I think.

Elsewhere on the ship, the adults are snoozing in the sun at the adult Quiet Cove pool, working out in the fitness center, getting pampered in the spa, checking out a cooking demonstration (ever want to know how to make Spiced Island Jerk Chicken?) or taking a Latin Dance Class. On one day at sea, you could go from a Sommelier Selection tasting at 12:30 to a Martini tasting at 2:30 to the Mixology Seminar at 3 to a Tequila Seminar at 4 to a Cognac tasting at 10:30 p.m., followed by adult versions of the entertainment whether comedians, magicians or musicians.

The spa does a healthy business too, spa manager Erika McAvitt  tells me when I show up for my combination facial and massage (did I mention the Tropical Rain forest  Room with steam, sauna tropical showers and heated mosaic relaxation chairs?)  Some 500 treatments are done per cruise, with massages the most popular. “This cruise is all about the kids,” McAvitt says. “Parents come here to escape for a bit. The spa is more popular than on other cruise lines.”

Of course there are treatments for kids too—”Princess” that includes mini mani-pedi, and facial and a Pamper Package for teens.  At $89, they typically do  at least eight on a sea day.

Susan Jackson, a teacher from Washington State, is cruising with her sister Virginia Masaitis from Virginia, Masaitis’ four kids and their dad who orchestrated the trip so his East Coast grandkids would have some happy memories of time spent with granddad, Masaitis said. The two sisters were having a blast at the mixology session, not feeling the least bit guilty that the kids were in the organized youth activities.

In fact, Masaitis said she was planning to leave her  six year old on board while the others divided up with the adults for shore excursions.”

There are couples sailing without any kids too—like Michelle and David Berbube from Connecticut who left their two teens at home while they celebrate their 25th Anniversary on a Disney ship. “They have such a great set up so everyone gets what they want,” says Berube, adding that seeing the young kids makes him smile—remembering those days with his children.

“Top Quality,” Benie McCay says. And that’s what he and his wife are looking for—so be it if there are more than 1,000 kids on the ship. “We are leery of taking a chance on another cruise line.”

Mary and Bernie McCay have four kids but none are with them on this trip–their fifth Disney cruise.  “I’m so busy having fun I don’t even have time to take a nap!” jokes Mary McCay.

The Zatarains’ meanwhile are traveling with their adult kids–26 year old Derek and 22 year old Samantha as well as Samantha’s boyfriend Logan—all sharing one cabin .  This is their fourth Disney Cruise, Stanley Zatarain says (more than half the passengers on this ship are repeat Disney Cruisers) and there is plenty for all the young adults to do “There are no rules except everyone has dinner together,” he said. “There isn’t anything we want to do.”

Even in our Adventures by Disney group there are three couples traveling without kids as well as three grandparents. Ginny Sagfranek, whose three daughters are grown, is part of our group with her husband Philip and another couple from their Chicago suburb.

Why a Disney cruise without kids? First, they are Disney Vacation Club (www.disneyvacationclub.com) members so they were able to use points for their cruise. Adventures by Disney works for adults without kids as well as families, she adds.  “Everything is planned we didn’t have to think and everything has been planned so efficiently!”

“This cruise is for everybody,” she says. “If you think this is just for kids you are missing a lot.” She adds, “I don’t go near the kids’ pool!