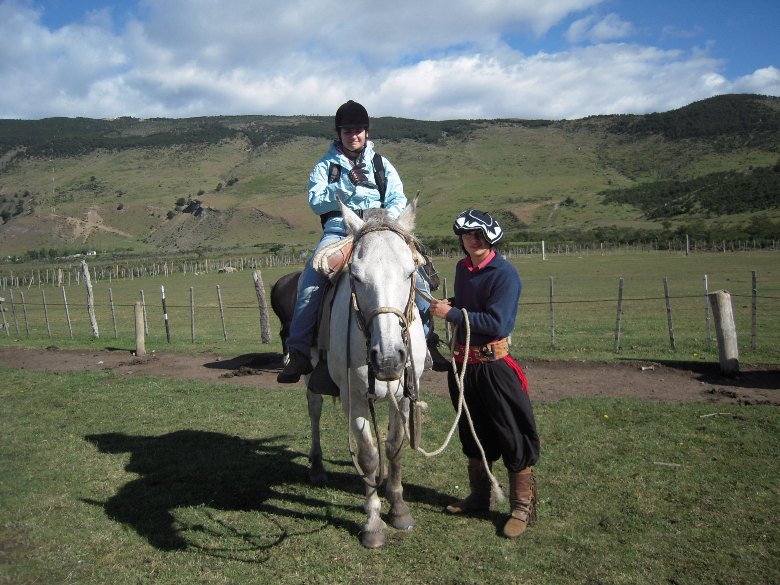 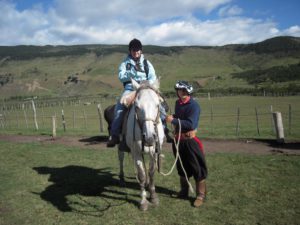 DAY 7 in Chile — It is one of those vacation days I think I must be dreaming. I’m in the Patagonian hills of Chile riding a gentle horse named Chinosca as we climb higher and higher on a traditional estancia or ranch, past grazing sheep and cattle. The hills are dotted with stumps of the traditional Linca trees—cut down in the early 1900s, our guide Alvaro Jaime tells us, both for energy in the new settlement of Puerto Natales and to provide more grazing land in those days.

The vistas are spectacular — rolling green hills and in the distance, the turquoise blue water and snow-topped mountains.  We’re led by a 16 year-old Gaucho named Carlos Vegas who has been riding since he knew how to walk.  The resort where we are staying about 20 minutes away, Hotel Remota (www.remota.cl) arranged to bring us to this spot and I feel very lucky, though  It is very windy and cold (this is summer in Patagonia!) and I’m glad we’re dressed for it with layers. Fleece, shells, gloves and wool hats. I want to take more pictures but it is hard as we keep moving uphill.

We stop to take in an amazing sight — we see the Dorotea Mountain Range and the frontier of Argentina.  Puerto Natales, a town of about 20,000 people is spread out in front of us as is the Almirante Montt Bay and the Senoret Channel.  It is beautiful but too windy to stand there for long.

Luckily, Carlos has found a protected place where he’s going to give us a lesson in mate-making.  Mate is a green tea-like hot beverage that is popular here and throughout Argentina and elsewhere. It is a little bitter but people here drink it all day. Carlos boils the water in a small kettle over the fire and then pours the boiling water into a cup where there is a special spoon-straw. We learn that the straw is pointed in our direction and that we hand it back to him the same way.”It is a show of good faith,” our guide Alvaro  It is polite to drink all the water in the cup through the straw. That’s easy when we’re cold!

The private field where we are riding is small by estancia standards — just 600 acres or so — but it is beautiful l and peaceful. Alvaro explains that this part of Patagonia — especially the Gaucho culture — has more in common with Argentina, which could be reached by land, than with the rest of Chile which could only be reached by water and of course now by plane. “The ice field cut the land in two,” he explains.

When the first settlers came here during the late 1800s, they ranched and mined. Only in the last 20 years or so has tourism taken off. We stop in a Puerto Natales restaurant called Ultima Esperanza for a “typical” Patagonian lunch. The place is filled with locals and we eat seafood — crab, scallops and fresh seafood soup — all that this region is known for, Alvaro Jaime tells us,

Now it’s time for a little shopping — a woolen scarf here, a baby lamb for a friend’s baby, some small lapis earrings — the stones are from here. The town is a backpacker’s haven. They are mostly on their way to or from the famous Torres del Paine National Park, which is about an hour and half from here and which we visited the other day.

I stop in to talk to American Bill Penhollow, who co-owns a small hostel called Erratic Rock.  His advice for visiting Americans:  “Be prepared for the weather.  It can be very unpredictable.“ We tell people to hope for summer and be ready for winter,” he jokes.  Penhollow, originally from Oregon, found his way here after a stint teaching English in Santiago. “This year is a breakout year for tourism,” he is convinced. “People here are very friendly and it’s safe.”

Alvaro and I make a circuit of the small town, past the Church, one of the oldest buildings here, the town square, the coffee houses and hardware stores, the waterfront playground and chocolate shop. Our shopping done, we all head back to Hotel Remota for a snooze.

A little adventure…a little culture all wrapped in beautiful scenery like I’ve never seen anywhere else.  And it didn’t rain!