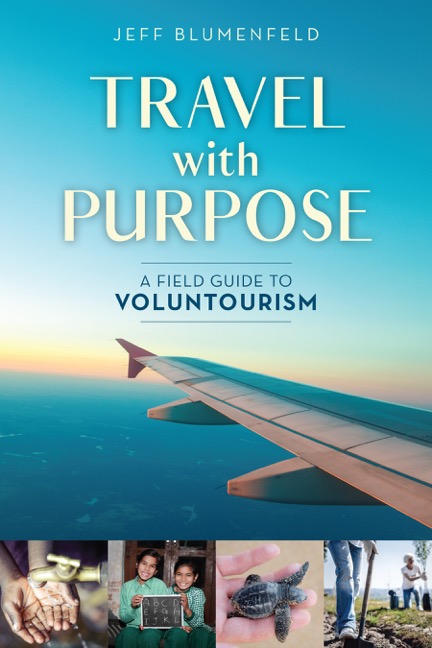 Excerpted from Travel With Purpose: A Field Guide to Voluntourism by Jeff Blumenfeld, (Rowman & Littlefield, 2019). www.travelwithpurposebook.com

I couldn’t imagine life without travel. After all, the world is a huge and amazing place. It makes you feel alive when, through travel, you’re touching as much of it as you can, gaining valuable insight on what’s important to other people and why.

But the global perspective that travel would eventually offer—the memories, the friendships, the business opportunities, the family memories—was a mere blip on my radar growing up in a small town ninety miles northwest of New York. Especially in the days before the Internet. What I knew about the world came from geography lessons in middle school and my singular mission to read through all A to Z volumes of the World Book Encyclopedia. With a Swanson’s TV dinner balanced on my lap, my worldview expanded exponentially as I watched Mutual of Omaha’s Wild Kingdom on television featuring host Marlin Perkins and his sidekick, a young Jim Fowler, who, decades later,

I came to know as a fellow member of the Explorers Club based in New York.

Then came the YMCA Tour-a-Camp program in the mid-1960s, and I hit the road in a bus alongside another forty teenagers on a tour of the United States. We alternated between campsites and hotels, heading as far west as San Francisco, before making our way back through Disneyland, then proceeding to the country’s major national parks. The Grand Canyon, Mount Rushmore, Zion and Arches national parks—they were all on the itinerary.

Later, in a typical college boneheaded plan, I would drive to Aspen nonstop from Syracuse, New York. A stupid college marathon of driving, drinking copious amounts of coffee to stay awake, and eating gas station hot dogs cooked on those ubiquitous grease-filled roller grills. Just recalling the taste of those belly bombs creeps me out.

Those trips were rather straightforward. The only beneficiary was me. Traveling in this manner did nothing to help others.

Significant volunteer trips would elude me until I entered the working world, starting at two public relations agencies before establishing my own boutique PR agency. It was then that my horizons broadened. I was no longer a kid from the Catskills. I was experiencing the world and working on a number of worthwhile projects.

I promoted historic expeditions to the North Pole and across Antarctica; spent two weeks in Nome and Anchorage to serve as communications director of an expedition across the Bering Strait; in 2010 I was chosen as a volunteer chaperone on an international high school students trip to the Antarctic peninsula where I lectured on the subject of exploration; and later that year, I volunteered as the media relations director of history’s longest sea voyage, a nonstop 1,152-day self-sufficient journey by extreme sailor Reid Stowe.

I was traveling at that time as a participant in someone else’s project rather than as a spectator or tourist. Which isn’t to say there’s anything wrong with tourism…

One thing about voluntourism will become crystal clear once you read further: many of the destinations that need volunteer help the most are often unvisited, sometimes unknown destinations, frequently in Third World countries. Overtourism is generally not an issue. Your priorities become remaining safe, comfortable, well fed, and well rested.

Travel in general has made me a better person; travel to Third World destinations in particular have been life-altering experiences that have helped me better cope with everyday challenges back home. Decidedly First World issues such as a fender-bender, a missing mortgage payment, and lost concert tickets pale by comparison to how millions of underprivileged people struggle to survive, such as the woman I met in Nepal who was blind for three years because she lacked the resources to pursue outpatient cataract surgery.

The experience of travel can be transformative, it can actually be beneficial to health, and for younger generations, a great resume builder, especially now that trends indicate this is a great time to travel.

Travel With Purpose is available on Amazon.com and at leading book stores nationwide.