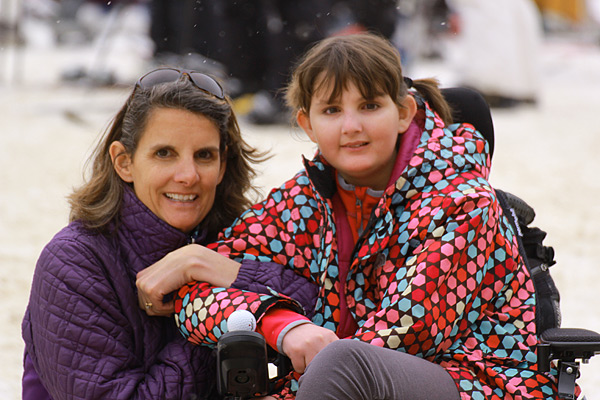 WINTER PARK, CO – Fifteen-year-old Kati Leasure can’t walk or talk very well and has progressive loss of muscle control as a result of a rare genetic disorder. She was treated for cancer last year. But that hasn’t stopped her from skiing, rock climbing, kayaking or river rafting.

The National Sports Center for the Disabled at Winter Park Co – in its 46th year—has made that possible and in so doing, changed not only Kati’s life but that of her parents and older sister.

“This unites our family, giving us sports we can do together,” said older sister Amy Leasure, 17.

For Kati, the program gives her confidence “that I can do anything!” she says with a big grin, and to learn to advocate for herself. Just as important she’s surrounded by others who have their own challenges as well as the professionals and volunteers who make it their mission to help Kati succeed.

“You never hear anyone say she can’t do something,” said Jennifer Leasure, Kati’s mom and herself a volunteer here. It’s a different world from the school district, she and her husband Wade said, where everything is a battle.

The NSCD, now one of the largest outdoor therapeutic recreation and adaptive sports agencies in the world, enables more than 3,000 children and adults, including growing numbers of veterans with disabilities, to challenge themselves outdoors, gaining life skills in the process.

“I don’t think people know all of the different types of programs we offer,” said Becky Zimmermann, the President and CEO, noting that people now come not only from all 50 states but as far away as Australia, New Zealand and Japan. No one is turned away; NSCD subsidizes 85 per cent of the cost of the programs 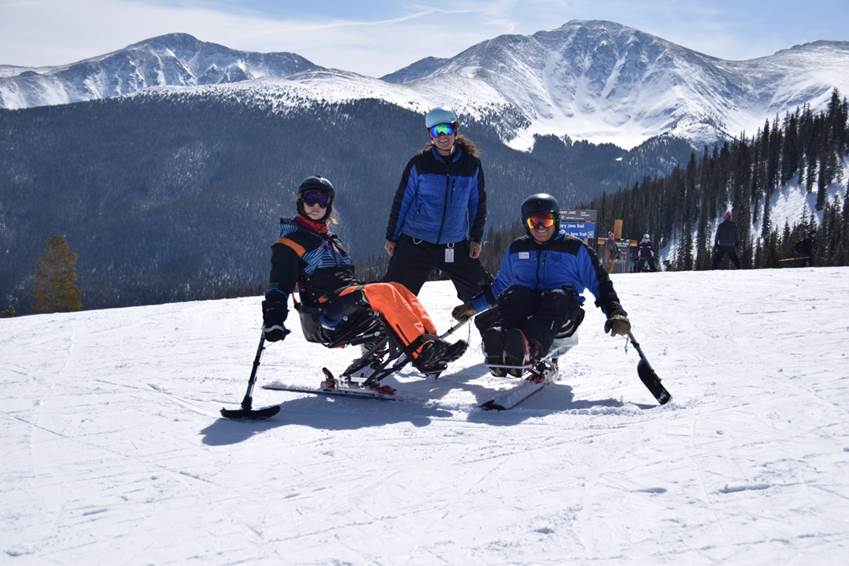 This weekend at Winter Park there was a big event — The Wells Fargo Cup—which attracted some of the country’s top para-athletes. Most people have heard of the Para Olympics but they likely don’t know there are camps for kids on the autism spectrum, therapeutic horseback riding, ability clinics hosted by Denver’s pro sports teams, programs for those who are blind and deaf or have cognitive deficits and amputees, plus veterans suffering from PTSD and other war wounds.

It all started when Hal O’Leary, a Winter Park ski instructor, volunteered to teach sking 23 children with amputations who lived in Denver. Now there are all varieties of adaptive equipment and a corps of more than 1,200 volunteers—like Bob Steketee, a retired middle school teacher, and his two kids Nathan, 20, and Hannah 22, who volunteer their weekends at the University of Colorado all winter.

They say they get as much out of the experience as those they are teaching on the mountain. “You very rarely see a negative attitude here,” said Nathan, an engineering student.

Hannah added that you realize that people—whatever their differences or challenges—are more alike than different. “It’s easy to see what people can’t do,” she said. “A lot of people don’t take the time to see everyone’s commonality.”

Their father Bob noted there was a lot more negativity when he was teaching middle school and he saw that his students would suffer from self-imposed disabilities by insisting they couldn’t do something rather than trying. 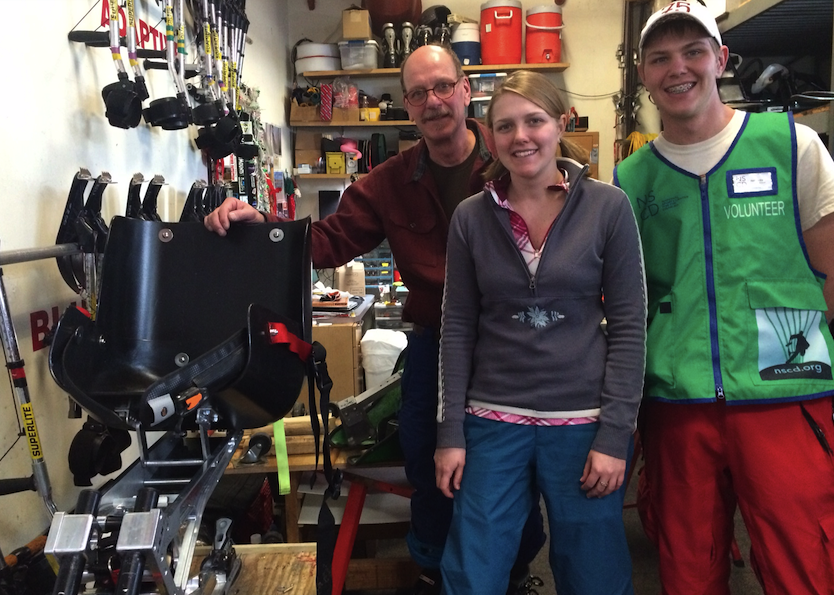 This program has inspired many other adaptive sports programs at snow resorts across the country as well as at Winter Park’s sister resort Steamboat, where Julie Taulman was inspired to start Steamboat Adaptive Recreational Sports. Her son Kyle, now 14, and competing in the Wells Fargo Cup, was paralyzed by cancer from the waist down when he was just two. The family ultimately relocated to Steamboat from Chicago. “I really don’t think I would have survived without adaptive sports,” she said.

“For a lot of people, you think, ‘I’m the only one,’ You feel so alone…to find other parents who understand this world is huge,” she said.

As for Kyle, participation in adaptive sports has taught him to push to be included in a variety of school activities with able bodied children. He has played on his school’s basketball team in his wheelchair and preformed in many plays. ‘These kids go back to their school as say ‘Why can’t I do that?’” Julie Taulman said.

“The biggest takeaway is that there is life after disability… The only limits are what you put in front of yourself.”

Shannan Williams certainly would agree. The 24 year old has cerebral palsy and is wheelchair-bound. But that hasn’t stopped her from skiing, scuba diving or graduating from college.

“It’s so freeing to be here,” she said, explaining that unlike the rest of her life where she must lug mobility devices everywhere, everyone she is with on the mountain has to lug their own equipment. She’s been participating in the NSCD programs for most of her life.

“How could I not ski?” she said. “My parents got married on skis at the top of Vail Mountain.”

“They have such a wonderful way of looking at everyone here, said her mom, Julie Allen, a former teacher. “It’s about what every person can do, not what they can’t do… and because there are so many people with disabilities here no one gawks.”

Just as important, Shannan says, she’s challenged to do more than she might have thought she could accomplish; she meets a lot of people who are brought together by their love of the mountains, not their disability. “Just being outside makes you energized,” she said., adding that program helps her physically “more than physical therapy,” and it’s a lot more fun.”

“For Shannan, being on the slopes and being in control has made her so much more confident in other areas,” her mom said. “That she can’t walk is not what defines her.”

“This really changes people’s lives,” said Nathan. Steketee. “If they are smiling at the end of the day, I’m smiling.”