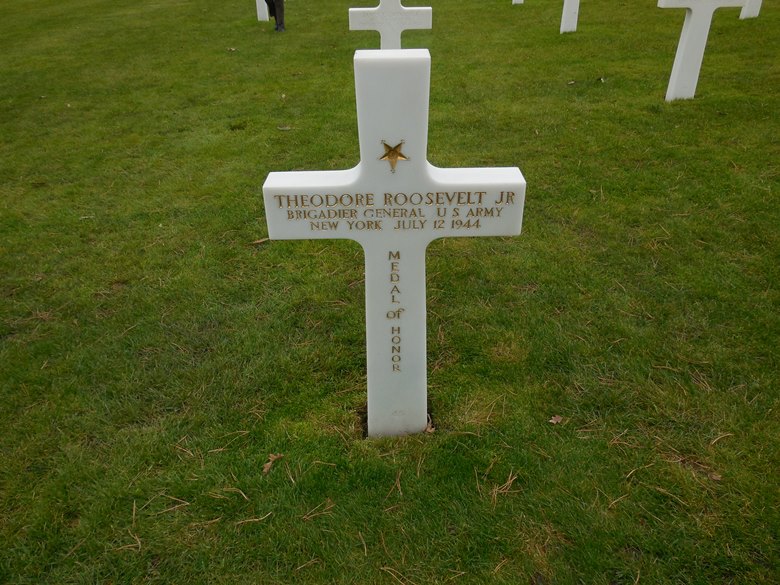 Elizabeth Kelly is in France, far from her Florida home, standing at the grave of a young Chicago lieutenant — the grandfather she never met.

Forrest Kelly was just 29 when he died, leaving behind a wife and two young children, Kelly said. At the Normandy American Cemetery and Memorial, overlooking Omaha Beach, he’s buried alongside thousands of young men who died too soon.

June 6 marks the 70th anniversary of D-Day, the massive allied assault that aimed to liberate France and defeat Nazi Germany, and many families, even if they can’t visit, will be thinking about grandfathers and great-grandfathers, sons, uncles and cousins who fought and died here.

Visiting here is a lesson in the costs of war that kids won’t likely forget. There are 9,387 headstones, including markers for 1,557 unknown soldiers, 45 sets of brothers and three Medal of Honor recipients, including Theodore Roosevelt Jr., son of the president and a 57-year-old general who led his troops ashore on D-Day and then died three weeks later of a heart attack. He is buried beside his brother, Quentin, who died in France in World War I.

We had the chance to tour Normandy’s famous World War II sites with Ron Van Dijk, who oversees European tours for Austin Adventures, the American adventure company that offers bike tours here, including several summer departures for families. Touring here, said Van Dijk, helps kids, especially teens and tweens, “realize what war is all about. … They think war is exciting, a big adventure … this changes their minds.”

Just as important, the time cycling through the bucolic countryside, the famous black-and-white Norman cows, the sweet lambs, the stone farmhouses and small villages helps to gain some perspective about those who lived through the war and those who live here now. Many of the roads in the countryside are named after Allied soldiers who died in Normandy.

There is the chance to visit a cheese factory or see cider being made, suggests Jean Marie Batran, owner of the 18th-century Chateau de Sully, just outside Bayeaux, where families stay on part of the bike tour. It’s a good spot to anchor yourselves for a few days. (You won’t want to miss the nearly 230-foot Bayeaux Tapestry that dates back to the 11th century!)

There’s also the chance to feast and introduce the kids to new foods — long sausage served in a crusty baguette at a farmer’s market one day, fresh oysters in the small port town of Port-en-Bessin another. We met a young family at the Chateau de Sully enjoying the chef’s dishes at dinner as much as we were, especially the selection of Norman cheese.

We started our tour in Sainte-Mere-Eglise, where the men of the 101st and 82nd Airborne Divisions jumped into the darkness, landing in the trees, in flooded marshes and in a schoolteacher’s garden. (John Steele landed on the bell tower of the church where he remained dangling, playing dead until he was captured and then freed. Today, you can still see a model of him hanging from the bell tower.

The excellent Musee Airborne here tells the story of those brave young men. Kids can climb through a glider (with models of the paratroopers inside), making it easy to see what it would have been like aboard. We see everything from battered helmets to the baseball mitt and balls the GIs played with. Did you know more than 4,000 men were sent into the battle in 512 gliders?

To reach the plateau where the American Cemetery stands, troops fought across an open area and up steep bluffs. By the end of the day, Americans had control of Omaha Beach and the tide of the war had turned. But the cost in human life was terribly high. The 101st Airborne alone lost 30 percent of its 15,000 men and most of their equipment.

Nearby at Arromanches Circular Cinema we see a 20-minute movie shown on nine, 360 degree screens that tells the story of the 100 days of Normandy, complete with archived footage from around the world.

But all of the museums and the best films can’t compare to showing the kids where the action took place on the beaches, in the huge German fortifications that stretched along the coast called “The Atlantic Wall.” Kids clamor up on top of the giant concrete bunkers and then peer through the lookout over the coast at Longues sur Mer just as the German soldiers did just before D-Day.

We see the steep cliffs Army Rangers had to scale at La Pointe Du Hoc, halfway between Omaha and Utah beaches. At the Utah Beach Landing Museum, kids can get an activity book in English narrated by a “Jim,” who tells the story of the fighting from a soldier’s perspective. “A lot of us never had any real combat experience,” Jim explains.

I loved how the museum artifacts make the 1944 battle real to 21st-century visitors — the soldier’s watch that stopped just before the landing, the things like chewing gum and jelly that Americans brought to France. There’s a landing craft that ferried the soldiers to and from their ships.

For months after the landing, Utah Beach was used to ferry provisions, fuel and ammunition to the front lines.

We stop at the Ryes War Cemetery — the only one where British and German soldiers are buried in the same place. Each of the British stones has a poignant inscription from each soldier’s family. “I say Fred is not Dead, he is just away,” reads the grave of F.I Hillyard from the Royal Engineers, who was just 23 when he died in August 1944.

At the American Cemetery, there are no ages — just names, rank and home state. Most of those who are buried here, including many brothers side by side, died in the D-Day invasion or the weeks afterward.

“I don’t know much about my grandfather,” Elizabeth Kelly said. “My father was too young to remember him.”

But Forrest Kelly hasn’t been forgotten. There are two more Forrests in the family — his grandson and great-grandson.

For a guide to World War II museums and historical sites, visit here.