Yes politics is ugly. But kids need to learn about elections – here’s how 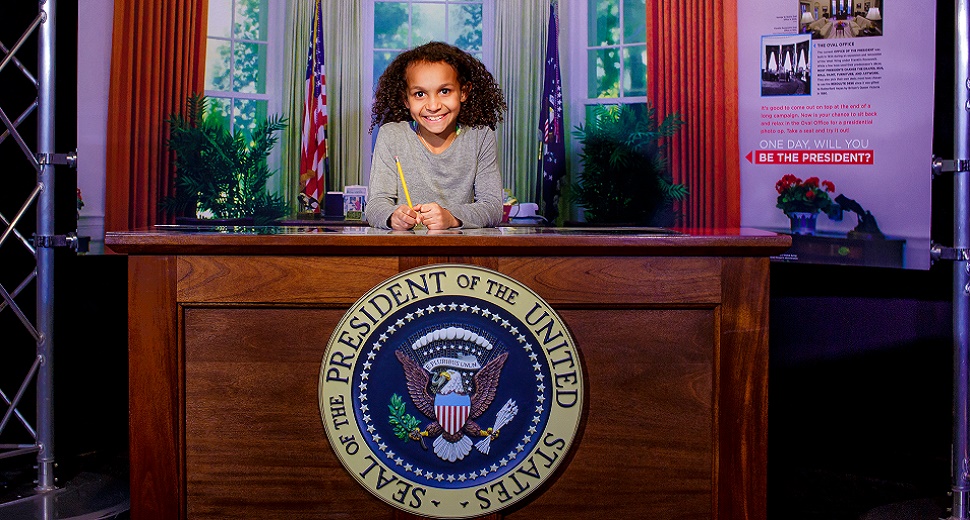 Headed to the White House

Most of us are probably really glad that this ugly election season is at an end. No wonder so many families have simply been turning off the TVs at a time that traditionally has been a teaching opportunity for their children.

But there still is a lot to be learned about the electoral process, of course, and museums around the country have mounted interesting, interactive exhibits that can answer kids’ questions and serve as a positive teaching tool—but only in the coming weeks.

Here are some examples:

1.  PHILADELPHIA – Headed to the White House: Play the role of Candidate at the National Constitution Center, located steps away from Independence Hall. See how elections have evolved, star in a campaign ad or take a seat behind the Oval Office desk. Through December 31, 2016.

2. WASHINGTON, DC ­– Hooray for Politics!: Two rally signs remain at the entrance to an exhibit at the Smithsonian’s National Museum of American History that has showcased every presidential hopeful. View memorabilia from long-ago and recent elections, including small metal buttons celebrating Washington’s inauguration in 1789 and posters from this year’s Democratic and Republican national conventions. ONLY Through November 14, 2016.

The new Smithsonian  National Museum of  African American History and Culture is a terrific place to help kids appreciate the struggles African Americans have endured simply to exercise their right to vote. A Changing America:1968 and Beyond   explores contemporary black life and the challenges faced by African Americans in our time, including the second election of Barack Obama

3. WASHINGTON, DC ­– CNN Politics Campaign 2016: Like, Share, Elect: CNN and the Newseum explore elections today in which candidates and the public connect like never before—digitally. People pose their own questions in the #CampaignConfessional and watch other voters from around the country do the same on screen. Through January 22, 2017.

4. NEW YORK CITY- Campaigning for the Presidency: The New-York Historical Society Museum & Library presents more than 120 objects from the Museum of Democracy/Wright Family Collection, one of the world’s largest holdings of political campaign memorabilia. Board games, posters, T-shirts, paper dresses, stickers and other political effects showcase the ideals, culture, humor and biting criticisms of the elections between 1960 (Kennedy v. Nixon) and 1972 (Nixon v. McGovern). Through November 27, 2016.

5. CLEVELAND – Louder Than Words: Rock, Power and Politics: The relationship between music and politics plays out at the Rock & Roll Hall of Fame now, and at Washington D.C.’s Newseum in 2017. Artifacts, firsthand accounts, media headlines and songs compose the story of music responding to and influencing history—think Vietnam War, Berlin Wall, #BlackLivesMatter, feminism and political campaigns. Items on display include John Lennon’s guitar from his Bed-In for Peace with Yoko Ono.