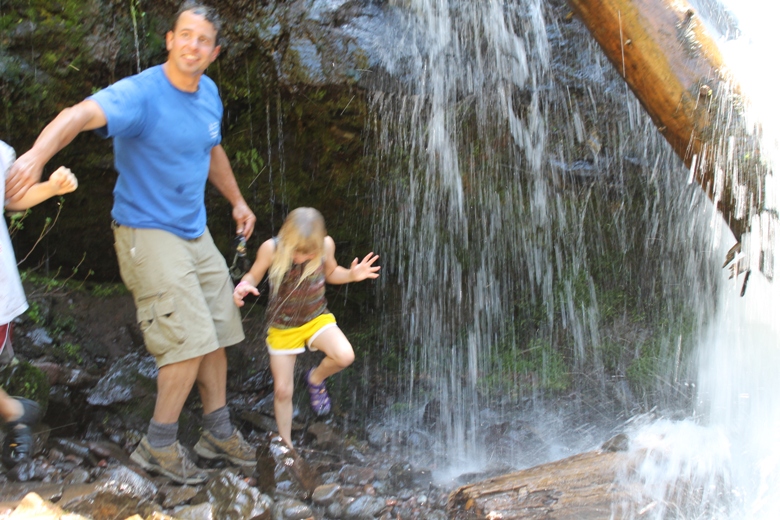 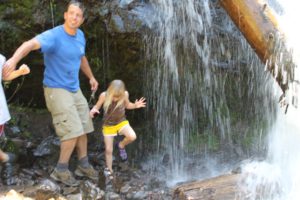 Matty K and Hannah dipping under waterfall near Bozeman MT

Montana has more dinosaur bones in its rocks than anywhere in the country. And the Museum of the Rockies in Bozeman  has not only one of the largest collections of dinosaur fossils—over 300,000 specimens—but some of the most famous in the world including  a Tyrannosaurus Rex and Triceratops.

Dinosaur remains have been found in 48 of Montana’s 56 counties—there’s a group of Diplopodocus who got stuck in the mud and a progression of Triceratops that shows how their horns change as they grow older. (In case you are wondering, backward pointing horns are juveniles; forward facing horns are adults.)

This is also a renowned research institution affiliated with Montana State University where world famous paleontologist Jack Horner directs research. He found the first evidence of dinosaurs’ nesting, now is studying whether dinos that we thought were different species are really the same—just different from juveniles to adults.

“Dinosaurs are one way kids can begin to get excited about science,” says Horner, the inspiration for the Paleontologist character in the Jurassic Park movies and Steven Spielberg’s technical advisor for the three films.

The museum has the largest T. Rex collection in the world and it is impressive. (Check out the largest T. Rex skull in the world, 5 feet long!  But my two young cousins—nine year old Ethan Sitzman and his six year old sister Hannah– really don’t care about that—they are too busy gawking at the giant dino skeletons and skulls. Check out the baby triceratops “breathing” under its mama… Katherine the T Rex…so named because it was discovered by a researcher named Bob atop at 20-foot cliff where he’d stopped for lunch… and the Wankel T. Rex, one of the most complete ever found and discovered by Kathy Wankel when she was fishing in Montana in 1988.

What a great place to teach kids about geology (it is because of the kind of rock here and erosion that so many dinosaur bones are exposed)  It is also a terrific place to stop to introduce kids to Yellowstone National Park, thanks to a the year-old Explore Yellowstone Children’s Discovery Center, complete with a model of Old Faithful  that “erupts”,  bubbling mud potsand a smell tube that gives kids a whiff of  hydrogen sulfide that permeates the air around Yellowstone’s thermal features.

This is the first morning of our guided trip to Montana and Yellowstone, arranged by  Montana-based Austin Lehman Adventures, which has been guiding visitors to Yellowstone and beyond  for more than two decades—several hundred families a year. The company sends adventurous families around the world but Yellowstone remains their signature trip and the Museum of the Rockies is a great place to start.

The only problem is  getting kids out of the Discovery Center when they can “fish” with magnetic poles (learning that  cutthroat trout have to be thrown back while lake trout can be kept), “camp” in a tent) and get up close with a life-sized Bison, a fox and an otter—all made out of recycled materials.  Play the xylophone on the bison!   Of course there is a craft area–the kids made wild flower pinwheels– and a crawling play area for toddlers.

There’s a dress up corner at the “lodge” where kids can become cooks (the wood stove has a fake fire)  firemen fighting wild fires or park rangers.

We’re only able to  coax them outside to visit the Tinsley House, an original 1890s Montana farm house moved here to Bozeman and  where costumed interpreters show kids what life was like in the late 19th Century — no bathrooms! No TV or computers! They dress up in turn of the century garb, check out the kitchen where volunteers are cooking, try out the old-fashioned toys in the bedrooms, and head outside to pump water. They agree they wouldn’t have liked bathing in the tin tub on the porch.

Good thing we can return to the 21st Century. We hop into our van—glad we’re not driving—and head to the trailhead. I don’t know which was better—the spectacular waterfall we see on our first hike up Hyalite Creek to Palisades Falls–or that our guide Matty Kirkland suddenly shows up with a silver tray of yogurt and berry parfaits.

Truth be told, we’re guinea pigs of sorts trying out a  family trip Austin Lehman—based in Billings—may offer next year.

Sure we could be hiking on our own. But it sure is nice that none of us have to figure out which trail to take or entertain the kids or make sure we have water, bug spray, sun screen and snacks.  Our guides, Matty Kirkland (known at Matty K) and  Katie Gugliotta do that and more., enabling my husband Andy, me and my cousins Mike and Jayme Sitzman to relax while someone else frets the details.

This year, despite the economy, Austin Lehman Adventures is having a banner season. Along with group trips, growing numbers of families opt for a trip just for their own family group where they can dictate the itinerary often at no more cost.   “We love custom trips,” says Kirkland, who has been working for the company for the beginning. “There is always something new and exciting.”

Along our way, Kirkland explains to us and the kids the difference between trees.  Pines grow in pairs.  Spruce is spiny, while firs are flat.  We learn all about edible tings in the forest – from dandelions to pine sap gum, and all varieties of berries. Wild strawberries!  Forget PB&J for lunch—at a shaded picnic spot, we’re served  tacos and  quesadillas while the kids break a piñata filled with candy. No wonder no one is whining or complaining. When six-year-old Hannah gets tired hiking, our guides offer her a piggyback ride and a game to keep her amused  along the way.

We hunt for frogs and pose for pictures at the waterfall.  When we get to our hotel at the end of the day –the Gallatin Gateway Inn   opened as a railway station and hotel in 1927 to house early visitors to Yellowstone National Park — our guides check us in, bring up our bags and even offer to chaperone the kids at the pool while we relax.

Wow, I could get used to traveling like this. Earlier, before we’d left the trail and after we’d gotten sprayed by the waterfall.  Katie, Mattie and the kids build an honest to goodness arch out of chunks of basalt rock that is lying in great piles along the side of the trail.

We all cheer when it stands on its own.

“With kids,” says the 35-year-old Kirkland, who has been guiding families for 15 years, “It is always about the journey, not the destination.”

For grownups too,  I think.

Next:  Ziplining through the trees at Big Sky