A shore excursion like no other – St. Marks Basilica in Venice on a rainy night 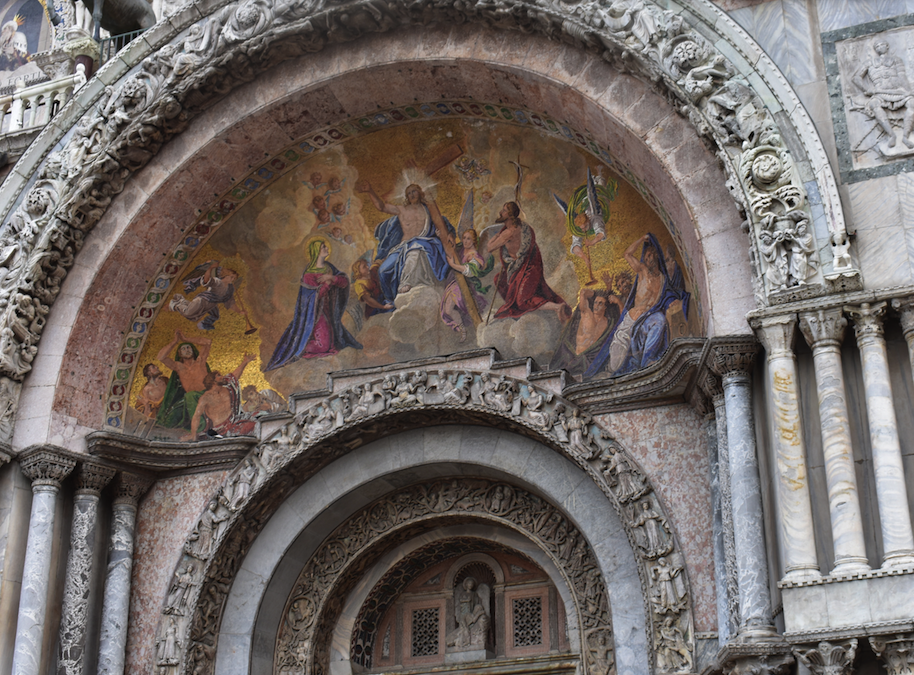 St. Mark’s Basilica is dark and silent as we file in, drenched from the rain. The church is closed to visitors. We are here as an “exclusive” only for passengers of Uniworld Cruises’ River Countess. (Sadly, no photo-taking allowed).

Our guide, Susan Steer, came to Venice to study art history 25 years ago and ended up marrying a Venetian. Along the way, she finished her PhD.  But her tour was anything but dry and dull. “A real story teller,” one of the Uniworld guests said admiringly.

Mural over the main entrance to St Marks Basilica

Slowly, the lights are turned on, revealing 46,000 square feet of golden mosaic, some dating from 1270. And some made with 24-carat gold leaf to represent divine light. The marble floors are composed of more than 100 kinds of marble in different patterns.

Even the most jaded teens couldn’t help being impressed by the paintings by unknown medieval artists — angels weeping at Christ’s crucifixion; doves shooting flame onto the heads of saints; Noah leading animals into the ark and later, his sons spying him, supposedly sleeping off a little too much vino, in the nude (Noah in his cups, Steer dubbed it).

Then there is the arrival of St. Mark’s corpse—under a basket of pork–after being stolen from Alexandria. The story goes St. Mark was killed during the early days of Christianity in Alexandria. In the 9thCentury, his remains were stolen and brought to Venice. The thieves hid the remains under a load of pork that so repelled the Muslim guards at a crucial border crossing that they simply waved the men through. The corpse arrived to great crowds (depicted in the mosaics). His sarcophagus is here today. Above the sarcophagus is the spectacular Pala d’Oro, a gold altarpiece with nearly 2000 gems—rubies, emeralds, pearls and sapphires.

WOW! I have been to St. Mark’s Basilica before but always among teeming crowds of tourists. Tonight, I could really appreciate what we were seeing. (The fresco depicting the Tower of Babel helped bring that thought home!) 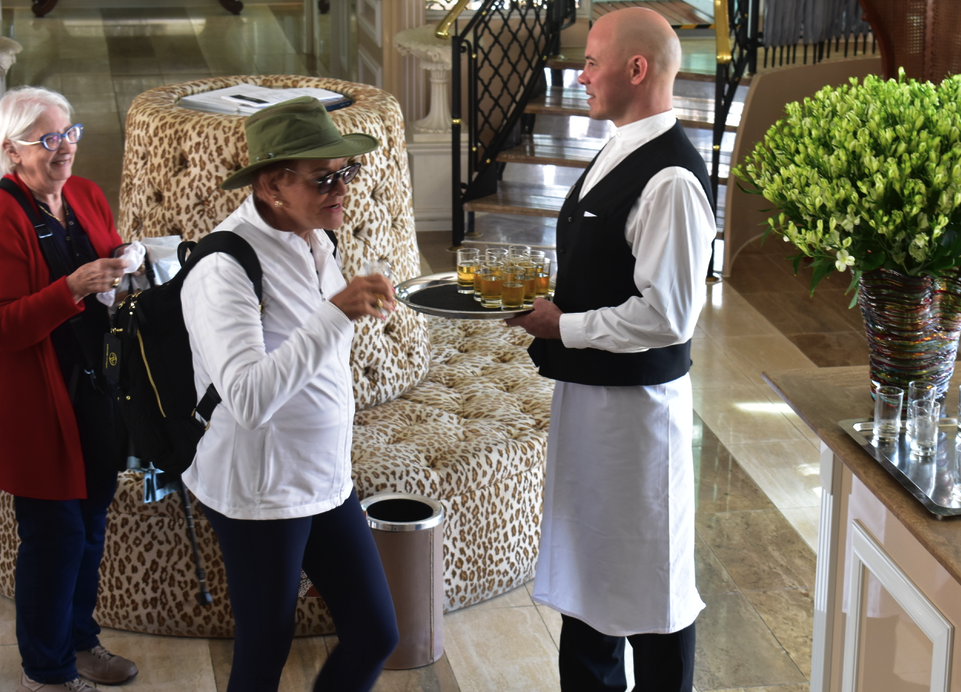 Passengers returning to the Uniworld River Countess after an excursion

Every Uniworld voyage has at least one “exclusive to Uniworld” excursion like this.

There are also “Do Like the Locals Do” excursions designed to give visitors a sense of life here—this week it will be a visit to Venice’s famous Rialto market with Chef Bogdan Antonescu. There are also “Let’s Go” excursions, along with the visits to churches, museums and monuments–in this case it will be an eight mile bike ride in Chiioggia.

The food and wines on board the River Countess, the chef explains, are designed to give guests a sense of place—every day  at the buffet lunch, there is pasta, salami, cheeses and meat and fish dishes that are local. Even the pizzas, he said, are made with local ingredients.

We are sailing this week around the Venice Lagoons and for many onboard, this isn’t their first trip to Italy, or even to Venice. They want to dive deeper. In the summer, two of the sailings here are “Generations,” trips designed for families with special excursions–although Damiano Olivieri, the Cruise Director notes that the teens often prefer the adult excursions, seeing the churches and museums, taking in the history.

Olivieri laments that more guests don’t read up on the destination before they come so that they know what they want to see and do, beyond the regular excursions. “As long as we know in advance, we can organize for you,” added hotel director Carmen Mladenvovic.

In fact, the staff couldn’t be more accommodating—whether the room “butlers” the waiters, the bartenders. They come from around the world–Romania, Hungary,  the Czech Republic, among others. 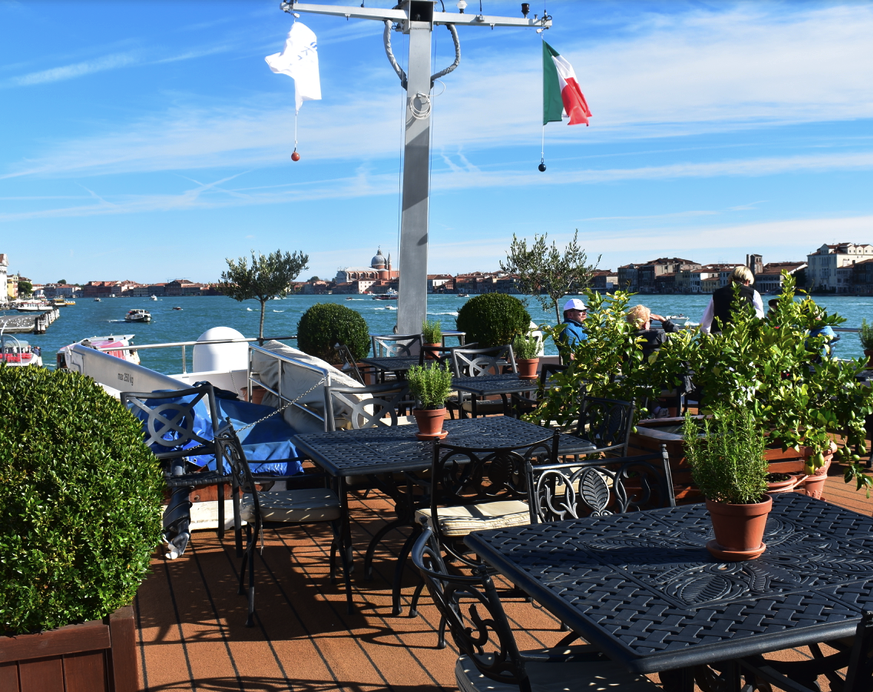 “They seem to genuinely like their jobs,” said Mae Blanchard, traveling with her 87-year-old father Dick Tucker and her sister Tracy Godey.

That the tips, excursions and alcohol are included are another plus. The staff isn’t trying to ingratiate themselves for better tips, guests say. “And you aren’t opening your purse all the time,” said Maria Ramirez, traveling with her sister Elviria Labarre.

“I admit when I first saw the boat compared to the big ships, I wondered what we got ourselves into,” said Ramirez, on her first river cruise. “But it is a whole lot nicer—just 100 people or so—than being with 3,000 other people.”

Many passengers, in fact, are veterans of ocean cruising. “But once they try a river cruise, they don’t go back,” said Mladenovic, adding that 60 per cent of the guests on this cruise are returning guests.

Dick Tucker, 87, is enjoying his fifth Uniworld cruise with his daughters. We’re only two days in but he laughed, “We’re already talking about next year.”