A visit to an ancient monastery and a giant Buddha 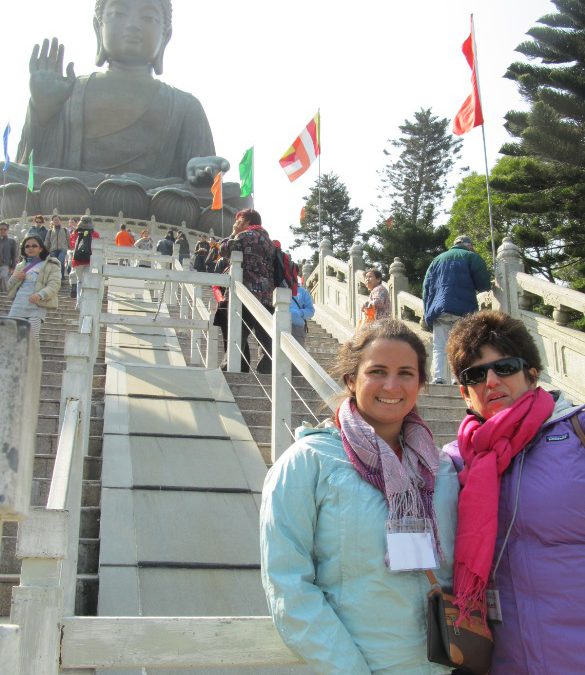 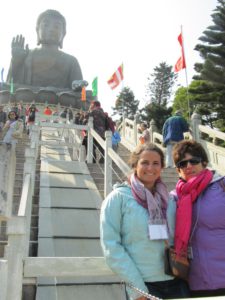 DAY 6–I’m standing in front of a Giant Buddha making a wish—out loud.

Monks, I’m told, stand in this very spot to pray because there seems to be an echo.

And this isn’t just any Buddha but the largest outdoor sitting Buddha in the Po Lin Monastery on the island of Lantau. The Monastery was established in 1906—some 100 monks hidden from the tourists still live here—but the Tian Tan  Giant Buddha   -which took 10 years to build—after 20 years of planning  has only been here since 2001. It is built from 202 Bronze pieces and weighs over 250 tons. We walk up 268 steps to get a closer look. Wow!  It is huge!

Outside people are lighting incense and praying. But what I can’t get my head around is that the merger of the commercial and the religious. Just outside the monastery is Ngong Ping 360, a little tourist village that with shops, and restaurants.

Even getting here is an adventure. We take a taxi from Kowloon (about $30 US dollars, though you could take the subway or a bus) and then board the famous Ngong Ping Cable Car for the 3.5 mile journey–it is the biggest cable car in Asia—We’re in the Crystal Car which means the bottom is clear so we can see not only North Lantau but the South China Sea and the planes lined up at the nearby airport.

Since this Cable Car was completed in 2006, this has become one of Hong Kong’s top tourist attractions—in fact when we leave, the lines stretch so long that people will be waiting for hours for the experience. (You can book tickets on line.)  As we walk through the village—yes there is a Starbucks here as well as a Subway—there are shops selling everything from stuffed pandas to chopsticks to tee shirts. People are here as much for the village as for the monastery and Buddha.

“It is a family day,” our guide says.  You can also opt for the four hour hike up rather than the half hour cable car—up winding wooden steps through the greenery. “It looks easy but it’ not,” our guide assures us.

The village isn’t cheesy—I’ve seen worse at other ruins and cultural places in the world. It is just a funny juxtaposition with people souvenir shopping and eating ice cream and then praying to the giant Buddha.  There is even a multi-media Walking with Buddha attraction that explains the life of Siddhartha Gautama, the man who became Buddha and his path to enlightenment.

We missed that and headed to the Buddha himself. Wow it’s big!  Tourists and locals are praying to him and posing for pictures in front of him. We do the same. I try to imagine trucks bringing up the pi8eces one ton at a time. Amazing.

But there is something else here—as touristy as this is—it is also a unique attraction and a pleasure to be out of Hong Kong’s throngs for an afternoon.  Our “Crystal” cable car seats 10 and the floor is made of a single piece of layered tempered glass-the first in the world. Crazy!

Now the monks have raised money to replace the small monastery with a much grander affair. It is being constructed behind the monastery we visit. Donations have poured in from locals, I learn.

Some people avoid the cable car entirely and hike up –up and down four mountains to get here—more than 3,000 steps!  This mountain top I over 3100 feet high—much higher than Hong Kong’s famous Victoria Peak.

“The idea is it must be hard to get to the Monastery,” our guide explains. When she was a girl, the bus only came half way up and you had to hike the rest of the way. “You have to really want to see the monastery and the Buddha,” she says. “It’s not supposed to be easy.”

I just wonder if my wish—the one I made to the giant Buddha—will come true.