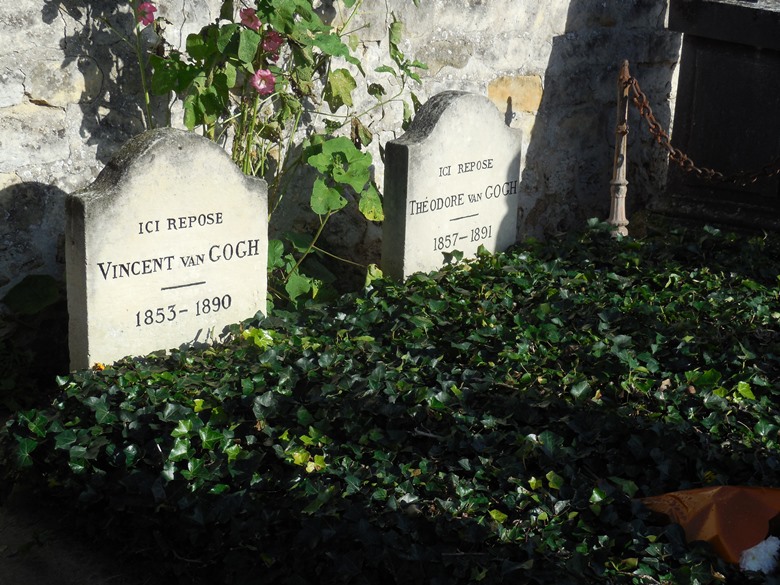 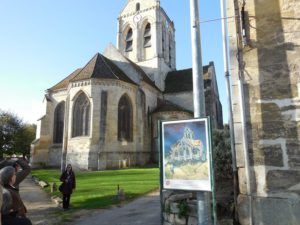 Back of church in Auvers sur Oise painted by Van Gogh

DAY 10– Auvers sur Oise, France — I’m literally walking in Vincent Van Gogh’s footsteps to the field where he painted the famous paintings like the Wheatfield of Crows and where he shot himself.

Such a sad story. Van Gogh, of course, was only 37 when he died and not yet famous.  He had come to the town of Auvers sur Oise, a short distance from Paris on the train because Dr. Paul Gachet, lived here.  A great friend to the painters of the time—Monet, Pissarro, Cezanne, it was hoped he could help Van Gogh.

Besides being bi-polar, he also suffered from epilepsy and was an alcoholic very fond of Absinthe, which many drank at the time.  There is even a small museum explaining Absinthe here.

The landscape here is picturesque—the fields, the river—people liked to come here from Paris to picnic on Sundays. The quaint village inspired  the Impressionists and then of course Van Gogh;  today some 30 painters and sculptors live here . 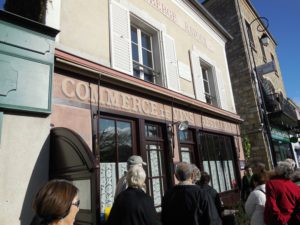 Van Gogh only lived  here for 70 days in the Auberge Ravoux – where his room has been left untouched — but he worked at a frenetic pace creating some 70 pieces  from his arrival May 20, 1890 until his death.  We see the church that looks just as it did when Van Gogh painted it—a stone church with a bell tower characteristic of the region, the town hall getting ready for Bastille Day celebrations.

We visit his grave where he is buried next to his brother Theo who died within a year.  There are always flowers on his grave, our guide Sophie Monbeig tells us. 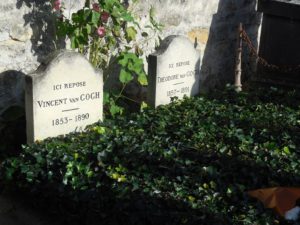 We’ve come here to Auvers from Conflans, where our Avalon Waterways boat has stopped for the morning on its return to Paris.  This evening we are promised a great river view of the Eiffel Tower lit up in all its glory.

I’m excited to see some of the paintings Van Gogh painted here at the famous Musee D’Orsay in Paris.   Theo Van Gogh gave them to Dr. Gachet after Vincent died but no one really saw them until 1952.  They hung in his home and later his son’s home.  During World War II they were buried to keep them from the Nazis.  It was only when Paul Gachet decided to donate them to France that the public could see them.

Ironically, after Theo Van Gogh died, his widow offered the paintings to the village of Auvers-Sur-Oise but they turned her down.  He wasn’t yet famous.  Of course those masterpieces now hang in the Van Gogh Museum in Amsterdam.  The Van Goghs were Dutch.

Today is our last afternoon on board before returning to Paris where there will be a full day of sightseeing and a farewell dinner before the cruise ends Tuesday morning.  The sun is shining.  Some people are sitting outside drinking Champagne; others have their feet up in the lounges with their floor to ceiling windows watching the scenery—the picturesque towns, the trees.

“It’s been everything I hoped it would be,” said Gloria McHugh, sitting on the back deck with her 51-year-old daughter Gloria savoring the last days of their mother-daughter sojourn.

“I’m done with big cruises,” said Gloria McHugh who is from outside Philadelphia as is her mother.  I don’t like the enormity of them.  And we’ve taken advantage of all the included excursions.”

Hank Katzen, here from Orlando to celebrate his wife Marcie’s 50th birthday along with two other couples is also enjoying the scenery and the sunshine.  “It’s so beautiful I don’t want to go inside,” he said.

Not a bad way to spend a Sunday Afternoon.