ABOARD OASIS, THE BIGGEST SHIP AT SEA 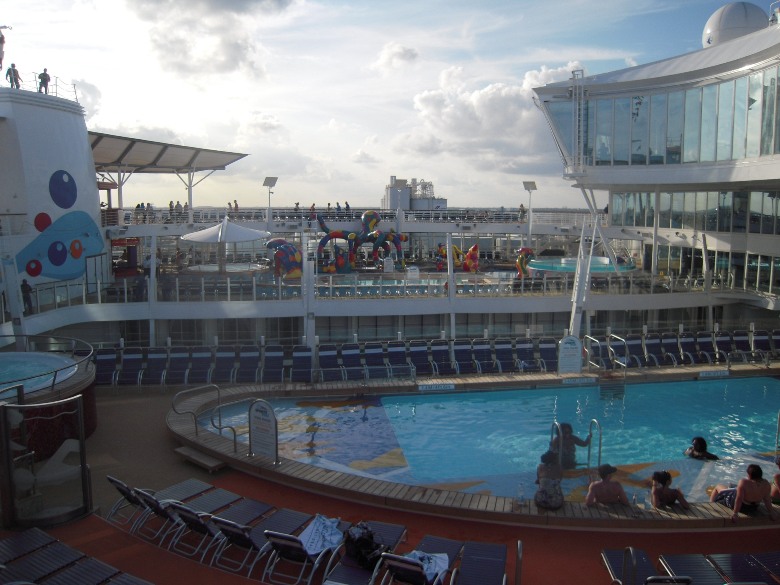 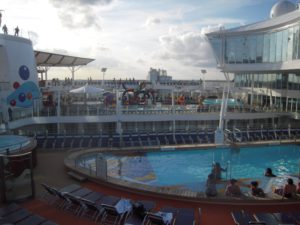 DAY ONE – Think Vegas on Steroids. Think overstimulation. Think every kind of food, entertainment you—and your kids could want.

If you don’t mind vacationing with 6,200 plus guests and 2,165 crew (from over 71 countries—welcome aboard Royal Caribbean’s Oasis of the Seas which made its maiden voyage December 5, 2009. (www.royalcaribbean.com )

I’m aboard a quick two night look-see trip along with other media, travel agents and others who scored a cabin. The ship is so massive—1,187 feet long and 28 feet wide and 213 feet high that it dwarfs all the other ships in the Port Everglades terminal in Fort Lauderdale.

Honestly, I don’t know where to start—the three separate teen spaces complete with 10 stations of Nintendo Wii, a teen back deck and living room with dance floors and “mocktail” bar, as well as the equipment for teens to try out their DJ skills, an expansive nursery at sea for babies as young as six months–only Disney can match that!—an entire science lab and theater for kids.

As well as a water area (complete with giant octopus) for the littlest cruisers, 21 pools including a Beach Pool with a saltwater pool, Sports pool where you can swim laps and play water polo, flow rider surf simulator and knock-out solarium area for adults with comfy cushioned lounges, whirlpools and even a Bistro with the emphasis on health conscious food like grilled shrimp, sugar free berry mouse, gazpacho, light waldorf and lentil salad…low fat dressing. Guess where I’ll eat lunch tomorrow!

There’s so much else—the carousel (yes, a carousel) a nine-hole mini golf course and an area for little golfers, a Broadway-type production of Hairspray along with an ice show, comedy and more. Specialty restaurants serving everything from steak to sushi and every other kind of food–ice cream and coffee bars, cupcakes, pizza, burgers and shakes at Johnny Rockets, a Seafood Shack and Champaign Bar…it goes on and on. There are just too many temptations (though the specialty restaurants cupcakes and some other places charge an extra fee)

I think it might take a week just to figure out this ship. If you want to spend time with your kids—especially teens and tweens—this might not be the best venue because they’ll be off with new found friends playing basketball, table tennis, mini golf and cruising the shops in the “Royal Promenade” stopping for pizza or an ice cream. There’s even a zip line at sea—more than 82 feet nine decks above the boardwalk. (Thanks but no thanks!)

That said, the ship really is well appointed and beautiful, though the cabins—at least mine is small (there are of course suites including some “loft” suites.

There even is a Central Park where you can sit outside and watch concerts, street performers and strolling musicians. Some cabins face directly onto the Central Park with tropical grounds that are longer than a football field complete with greens, trees and flower gardens—on board a cruise ship!  Teens will love the litany of spa treatments for them [maybe a fabulously fruity facial for $99 or for younger sisters, an Ice Cream Manicure ($45) Beauty doesn’t come cheap!]

Kids will love the Boardwalk with its aqua Theater where there will be aquatic acrobatic and synchronized swimming performances, the only carousel at sea (check out the hand painted horses!), rock climbing walls—43 feet high! Also: a specialty candy store, special teen retail and kids’ retail store, donut and ice cream parlor. My guess is this is where the kids will beg to go when they’re not in the pool or the Adventure Ocean and teen areas (on separate decks, by the way.)

There’s even Beach Pool where guests can cool out in chairs with the water underneath…Maybe tomorrow.

Next: So many choices in food, entertainment and more