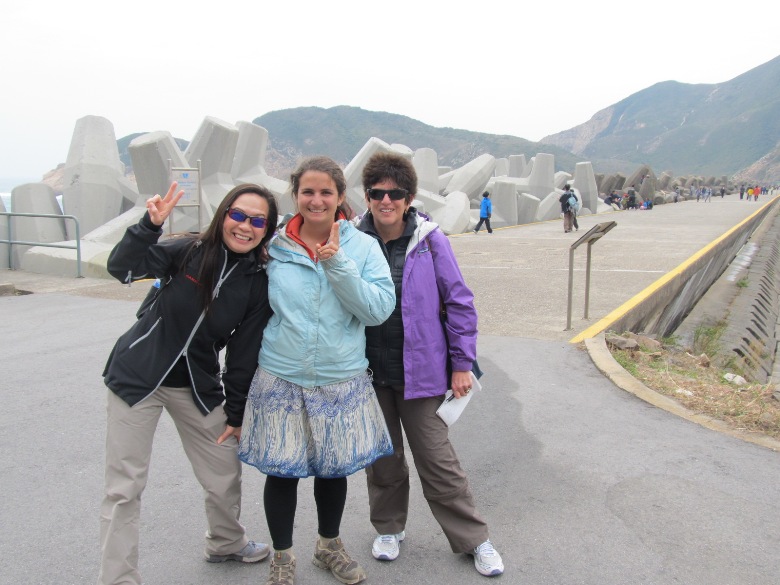 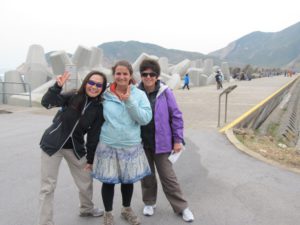 With guide Wing Lau at the Hong Kong GeoPark

DAY 8–Sometimes the best is last.

We’ve gone Northeast from Kowloon into the outer territories  and are sitting outside at Chuen  Kee Seafood Restaurant in Sai Kung, a small city of about 150,000 people as dish after dish of fresh seafood is brought to our table—lobster on top of noodles, fried squid, abalone, steamed fish, stir fried crab with ginger and scallions.

The restaurant is packed because it is the weekend. Before we ate, we ogled some two dozen tanks of fresh fish and seafood—lobsters (some from as far as Boston, sad to say) scallops, big Conch, Long clams and pearl clams and sea urchins and varieties of lobsters I’ve never seen. Our feast is just roughly $22 each USA. We’re surprised to learn that the fish comes from so far away—Australia the UK, the USA  but with so many people living in Hong Kong and 2 million tourists a month from China, there simply aren’t enough fish in the sea here.

“Most people don’t realize there is so much to see and do in the countryside. They just come to shop,” says  San Cheung, who has guided us around the Hong Kong GeoPark—a national Park and the only one in Hong Kong to see the famous hexagonal  volcanic columns that are taller than anywhere in the world—some are over 300 feet high. All around us are families posing for pictures ignoring the signs to not climb on the rocks. I imagine how quickly a U.S. National Park Ranger would be shooing them away but no one says anything except our guide who warns them of falling rock.

Geologists still argue today how these columns were formed some 140 million years ago. What is known is that a huge amount of volcanic ash and lava spewed forth with the volcano ultimately collapsing and forming a caldera.  The ash and lava slowly cooled and contracted forming the spectacular hexagonal rock columns that are light pink rather than the black we associate with lava rock. It does look kind of like a huge pipe 0rgan . There is a huge dam here that has created a reservoir providing fresh water to the people of Hong Kong.

The Geopark is huge and we see a lot of kids here hiking with camping gear on their backs.  We learn that most hexagogonal volcanic rock columns in other parts of the world are basic basalt lava but these are acidic silica rich rock making them not only interesting but so pretty.

“There is a lot more here than just shopping and restaurants,” says San Cheung.  People don’t realize that even in crowded Hong Kong, a lot of land has been set aside for green space and to protect natural wonders like these volcanic rock column –the most gigantic rock columns formed by volcanoes in the world.

Some people come and hike about six miles, but because of time constraints, we opt for a walk around the columns. Half of all the hiking trails of Hong Kong are here, Cheung says. “This is considered Hong Kong’s Back Garden.”

It is possible to get here by public transportation but it is quicker and when you have several people, to come by taxi—about $35 US Dollars from where we are staying and significantly shorter.  “Most people don’t realize the ecological side of Hong Kong,” Cheung says. “Take time to spend an hour here.”

He’s right. IT’s also a chance to mix with the locals—the cadets and scouts, the families out for a holiday stroll and then all of the locals on the sea promenade in  Sai Kung walking their dogs, pushing strollers, checking out the fresh seafood in the tanks outside the restaurants—at least two dozen tanks!

We are the only Caucasians here and all around us, people are talking Cantonese. But unlike China, they all understand English as well and are kind. It’s nice to get away from the hubbub that is downtown Hong Kong and all of the huge shopping malls and hotels.

This entire area used to be fishing villages but no more. It is good to see that it is prospering.

Later after sundown, we’re huddled in blankets drinking warm ginger tea watching Victoria Harbour’s iconic lights—all the more spectacular because they are decked out in holiday greetings. W are aboard the Aqua Luna (on of Hong Kong’s last r4emaining traditional red-sail Chinese junk boars. We’re stretched out on lounge beds watching the skyline. Looks like a post card.

We grin foolishly. By tomorrow night we will be home halfway around the world.