At the 9/11 Memorial on a cold, snowy morning 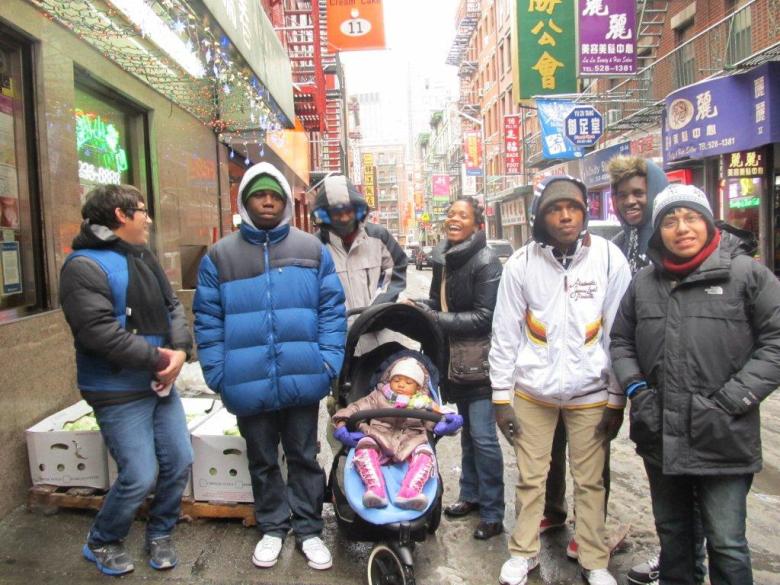 DAY  TWO — The next morning, we headed downtown on the subway, despite the snow and sleet to the 9/11 Memorial. (Tickets are free but it is necessary to get them in advance.)  The Memorial is helping to spearhead a rebirth of lower Manhattan with shopping, hotels, (The Conrad New York is the latest, expected to open in February) museums and restaurants.

The World Trade Center, of course, was a 16-acre commercial complex in lower Manhattan that contained seven buildings, a large plaza and an underground mall that connected six of the buildings. On September 11, 2001 the entire complex was destroyed in a terrorist attack that killed 2,977 people—2,753 in New York, 184 at the Pentagon and 40 people on Flight 93 that crashed in Pennsylvania. The famous Twin Towers that collapsed in the attack were the tallest buildings in New York City—110 stories each.

Today the Memorial Park, which just opened last September 11, surrounds two huge reflecting pools set within the footprints of the North and South Towers. They each feature 30-foot waterfalls, the largest man-made waterfalls in North America. The names of the people who were killed in the 9/11 attacks in New York, at the Pentagon and on Flight 93, as well as the 1993 bombing at the World Trade Center are etched in bronze.  Heartbreakingly, they are placed in groups—firefighters, police, work colleagues, friends and relatives. (Families of victims had a say in this.)

The plaza will eventually have more than 400 trees, creating a space for reflection. The trees were brought from a 500-mile radius of the site, including nurseries located in New York, Pennsylvania and near Washington, DC—areas that were impacted on 9/11.

The 9/11 Museum is expected to open later this year beneath the Memorial park and will be located at the bedrock foundations of the World Trade Center, offering displays of artifacts, interactive exhibitions and programs that will tell individual stories of survivors, responders, New Yorkers and residents.  Meanwhile, there is a visitor center that shows a short film and where you can purchase books, including several for children, that explain the horrific events and the heroes of that day—including the FDNY Search and Rescue Dogs.

The attacks killed people from 93 nations and Lower Manhattan, we told the boys, has long been the heart of the immigration community for well over a century.

We continued our tour in Chinatown, getting ready for the Chinese New Year with displays of special foods, puppets and decorations.  At Joe’s Shanghai, with outposts in Midtown as well as Queens, we were surrounded by Asian families and chowed down on dumplings, noodle dishes, fried rice,  varieties of chicken and beef with vegetables…the food kept coming and the boys kept eating—all for less than $20 a person!

“How many of your parents are immigrants?” Our guide Nuala Caomhanach asked the boys when we arrived at the Tenement Museum, which tells the stories of 97 Orchard Street. Built on Manhattan’s Lower East Side in 1863, this tenement apartment building was home to nearly 7000 working class immigrants who faced challenges. They faced challenges we understand today: making a new life, working for a better future, starting a family with limited means.

In recognizing the importance of this seemingly ordinary building, the Tenement Museum preserves and interprets the history of immigration through the personal experiences of the generations of newcomers who settled here-Italians and Jews, Irish and Germans.  “Touch the banister,” Caomhanach urged as we went up the narrow staircase. “You are touching history.”

Every one of our boys parents are immigrants—from Africa, Mexico, Jamaica and Trinidad, from other places.  They learned that had they been immigrants in the 1870s living here, they would have worked 10 hours a day rather than go to school; they would have been lucky if they had a chair of their own to sleep on.  Water would have been hauled—by the kids—up several flights of stairs—and four outhouses were shared by 70 people.

What makes this museum so interesting—and a visit is just about an hour—is experiencing the apartments of those who lived here and hearing their stories. The saddest, we agreed, was the young German mother whose husband went to work one day and never returned—just as her great grandson failed to return on the day the Twin Towers fell.

Since we heard so much at the museum about Italian immigrants, we decided—despite the boys’ griping that they’d walked enough—to walk the few blocks to New York’s iconic Little Italy and to Ferraras, famous for their Italian pastries, gelato and, I promised hot chocolate.

Hot chocolates and pastries for our gang didn’t cost that much less than our Chinatown lunch. But it was sooo worth it.

And by the time we got back to the hotel, the boys (politely) declined an offer of going out to a movie.  When else could they hang out in a Penthouse in the middle of Manhattan?