Despite high gas prices, families will hit the road this summer 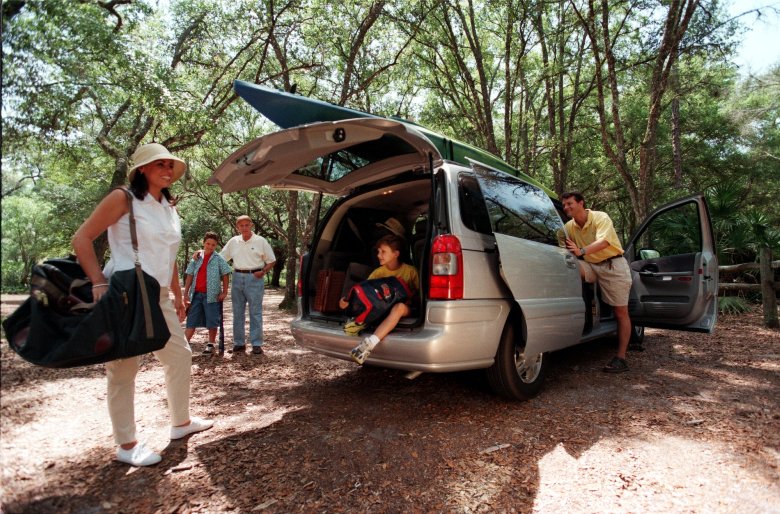 “Are we in South Carolina yet?” 6-year-old Melanie asked.

We hadn’t even made it out of New Jersey yet and already the back of the van was a crumb-and-paper strewn mess.

Barely an hour from home, 11-year-old Reggie took off her earphones just long enough to ask, “When can we stop?”

“We should have flown,” grumped 13-year-old Matt, who guarded his territory fiercely to avoid sharing his space with his sisters. (Yes there were times they marked their space with masking tape.)

I don’t know how we did it — all those minivan trips that took us camping in Maine, fishing in Minnesota and skiing in Vermont. We piled the kids in the minivan to go to South Carolina’s beaches, family reunions in Colorado, Colonial Williamsburg and Gettysburg, where we tried (not always successfully) to teach the kids a little history, weathering bad weather, speeding tickets, car sickness, and sibling squabbles along the way. (The van was so stinky at Gettysburg that the volunteer guide literally wrinkled his nose when he got in to show us the battlefields.)

All those trips took place long before backseat DVD players and smart-phone apps with games that make restaurant stops along the way more palatable. (We relied on audio books and a grab bag of inexpensive toys that got pulled out whenever we crossed a state line — both tactics still work today. And when all else failed, we pulled out the Tootsie Roll pops.)

This summer, with every electronic accoutrement and despite high gas prices — the current national average price for a gallon of regular, unleaded gasoline is $3.95, $1.04 more than last year — most of us will still hit the road, according to AAA, though nearly four in 10 of us will adjust our travel plans as a result, suggests a new survey from TripAdvisor.

In fact, AAA says 34.9 million Americans will travel 50 miles or more from home during the Memorial Day holiday weekend, the vast majority by car and the majority reporting they aren’t letting gas prices keep us home. Nearly 2.93 million of us will fly this holiday weekend—including me–an 11.5 percent increase from last year’s and despite airfares expected to be 14 percent higher than last year.

I wonder why more of us don’t take the train. Kids up to 15 travel for half price on Amtrak, which has also launched a new website, Kids Depot , offering fun facts and computer games. Hotels already are hearing our pain and are responding with gas cards, including Embassy Suites across nine states to extra savings and even free tune-ups at hundreds of inns around the country. Look for other savings from  DailyGetaways.com at DiscoverAmerica.com, the official travel and tourism website of the United States, including more than half off on CityPASS coupon books that offer discounted admission to major city attractions and museums around the country.

Still, no matter how much gas costs (check AAA’s www.fuelcostcalculator.com to figure out how much it’s going to cost you to get where you’re going), it’s cheaper to drive than buying four or five plane tickets. Nor will you get dirty looks from strangers on a plane if you can’t quiet your toddler or your kindergartner forgets to use her “inside” voice. You won’t have to pay either if your tween insists she has to bring every pair of shoes she owns — to the beach — which, of course, puts her duffel over the weight limit.

Wherever you go, make sure your safety seats are installed properly. Most aren’t, according to the National Highway Traffic Safety Administration. (It’s easy to find a Child Safety Seat Inspection Station near your home.) The NHTSA has recently revised its guidelines: You should use the rear-facing position until age two, or as long as kids fit within the height and weight limits of the car seat. And remember, no matter how much they beg kids under 13 should ride in the back seat.

The bad news: No matter how many movies, toys — www.babble.com has some good picks for the littlest travelers — and electronic games you bring along, kids will think it takes too long to get wherever you’re going, won’t appreciate the scenery and at some point you are going to wonder why you left home in the first place. Here are five tips to help you hit the road smarter and saner this summer without busting the budget:

COUNT BEFORE YOU GO. I’m not talking about kids, though that’s probably wise whenever you stop. I’m talking about suitcases. We got all the way to Cape Cod one year before we realized we’d left one daughter’s duffel by the front door. Make sure you’ve got all the “loveys” back in the car after stops, too.

VACATION CLOSER TO HOME. Not only will you save on gas, but also you won’t be stuck in the car as long with the kids. As a result of rising gas prices, according to a new TripAdvisor survey, 24 percent of U.S. travelers say that 200 miles is the maximum distance they are willing to drive for a leisure trip this summer.

SKIP RESTAURANTS. Choose picnics, takeout by the pool and breakfasts at the rental condo. You will not only save money and eat healthier if you stay at a place with a kitchen but you can relax over your meal while the kids play instead of keeping them corralled at the table.

LET THE KIDS HELP NAVIGATE. Before you leave home, encourage them to find places to stop along the way where they can burn off some energy. For example, Slide Rock State Park in Arizona where they can slide down a slick natural water chute or wade along the creek or Muir Woods just north of San Francisco with its giant Sequoias or places they can shop till they drop at outlet stores like in Freeport, Me., home to L.L Bean. (Download AAA’s free TripTik Mobile App (www.AAA.com/mobile) now available for Android phones and iPhones. It shows gas station locations complete with the latest prices, as well as hotels, restaurants and attractions.) Websites like www.drivei95.com can offer offbeat stops from Florida to New England as can new ones like The All-American Road Trip (www.planyourroadtrip.com).

STAY PUT ONCE YOU ARRIVE. Whether you are heading to a national park or a big city, stay in one place. Explore one national park rather than three and use public transportation to get around the way locals do.

Now where are those cherry Tootsie Pops?