Dinosaur museums are great, but finding remnants in the wild is even better 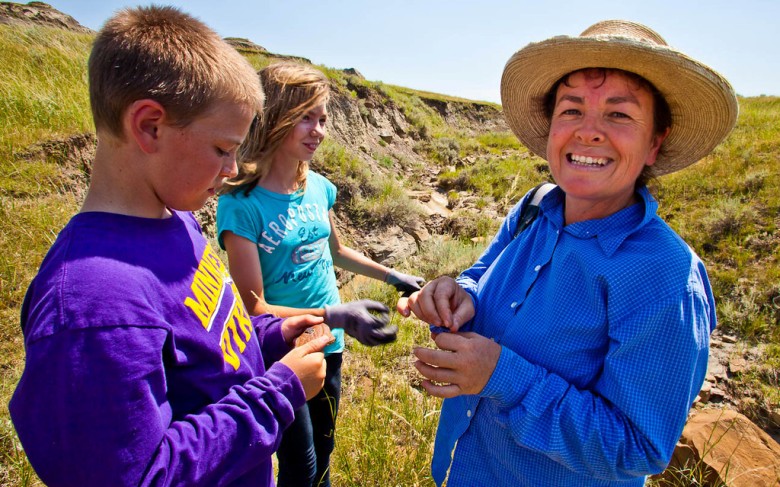 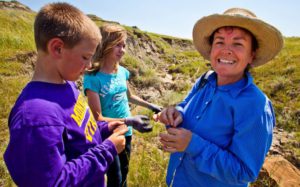 Marge Baisch was running horses on her dad’s eastern Montana ranch when she spied something on the trail that didn’t belong there.

“Too old to be a cow or horse bone,” she thought as she scooped it up and put it in her jacket.

It turned out to be a triceratops’ toe bone — with T. Rex teeth marks in it.

In the 50-plus years since, Baisch and her family have found more than 1,000 dinosaur bones and fossils on their sprawling cattle ranch in the small town of Glendive. They’ve donated some to museums, sold others and welcome visitors like us to hunt for their own ($75 a half-day for an adult, free for kids under 12). While paleontologists might not approve, the Baisches allow visitors to keep most of what they find.

“It’s so much more fun than a museum,” said 10-year-old Nick Frey, as he inspects what appears to be a dinosaur spine with his dad Jeff. The two drove more than 600 miles from Minneapolis with a group put together by John McCardle, owner of ZRS Fossils and Gifts, just for this experience.

Did I mention it was brutally hot and dusty? No one seemed to care. “This is one of the few places where you can hold a dinosaur bone in your hand,” explained McCardle. “And everyone loves dinosaurs!”

“I like walking right where the dinosaurs walked, to see the rock and the water where they walked, to think about what it was like then,” added 12-year-old Claire Dubois, part of the Minnesota group. Claire’s here with her parents, who freely admitted they were simply following their daughter’s lead. “It’s fun to have a surprise when you find something and then to keep it and show it off,” Claire said.

Montana has more dinosaur bones in its rocks than anywhere else in the country, we learned at the Museum of the Rockies in Bozeman. The museum boasts a children’s discovery center devoted to Yellowstone and a homesteading Living History area, as well as one of the largest collections of dinosaur fossils. Paleontologist and researcher Jack Horner is also here. Horner’s the inspiration for the paleontologist character in the “Jurassic Park” movies and was Steven Spielberg’s technical adviser for the films.

Dinosaur remains have been found in 48 of Montana’s 56 counties, but because of the rock formations in eastern Montana (also known as “Custer Country“), the richest cache is there, says Tom Shoush, the park ranger at the nearby Makoshika State Park. Makoshika, home of the spectacular “badlands” formations, is the largest park in the state and offers terrific campsites. (If you don’t want to camp, check out Charley Montana, a terrific B&B where we stayed, enthusiastically relaying our fossil hunting adventure to the other guests over breakfast.)

It seems that 65 million years ago, dinosaurs congregated here in land that was much like a Delta swamp. The soft rock called Hell Creek Formation subsequently eroded, exposing the treasure trove of dinosaur bones.

In fact, Makoshika State Park was named “land of the bad spirits” by the Lakota people because of all of the dinosaur bones they saw there. According to Ranger Shoush, by the 19th century, the area was well known to paleontologists, who would take “train loads” of fossils away to museums.

This summer, while paleontologists and amateur fossil hunters search in Montana and elsewhere, hopeful for the next great find, there’s been plenty of dino action in the big cities, too. With great fanfare, the Natural History Museum of Los Angeles County opened its new 14,000-square-foot Dinosaur Hall with more than 300 fossils and 20 full-body specimens, including the youngest known baby T. Rex and a rare young adult (dubbed Thomas the T. Rex).

In New York, at the American Museum of Natural History there’s “The World’s Largest Dinosaurs” exhibit that draws on cutting-edge research to delve into how these giant creatures — some longer than 150 feet — were able to thrive for 140 million years. Mamenchisaurus — 11 feet tall and 60 feet long, about the size of a tractor-trailer — is the centerpiece.

And in Chicago, the Field Museum has just celebrated the 11th anniversary of the unveiling of SUE, the world’s largest and most complete T. Rex. More than 16 million people have seen the exhibit and a version of it continues to travel around the world.

The Quarry Visitor Center and Quarry Exhibit Hall in Utah’s Dinosaur National Monument, closed since 2006 for renovation and set to debut early October 2011, will offer the state’s most dramatic dinosaur display, with the fossilized remains of over 1,500 Jurassic dinosaur bones preserved in a 200-foot-long wall.

Seventy-year-old Marge Baisch, brandishing a pistol (to ward off mountain lions and snakes) and riding a motorbike, revels in everyone’s enjoyment and excitement. She often hosts dinosaur-loving children referred to her by the Make a Wish Foundation. “What gets me excited is watching the kids get excited,” she says, mopping her brow with a red bandana.

Legally the Baisches don’t have to donate their finds to museums, though they have made donations to the Museum of the Rockies and to other museums. They also have a small museum of their own here on the property. (Check out those dino teeth!)

Shana Baisch, Marge’s daughter-in-law, inspects a piece one of the kids has handed her and declares it a bona-fide dino bone. The trick she says is to “look for small fossil pieces and then follow those up the hill in the hopes of finding a big skeleton.” That’s happened here, in fact.

But no matter how big or small their find, “It’s a real adventure,” declares 10-year-old Nick Frey.

And when you’re taking the kids that is all that matters.

(For more on Eileen’s Montana adventure, read her travel diaries)