Disney’s private island and our last night on the cruise 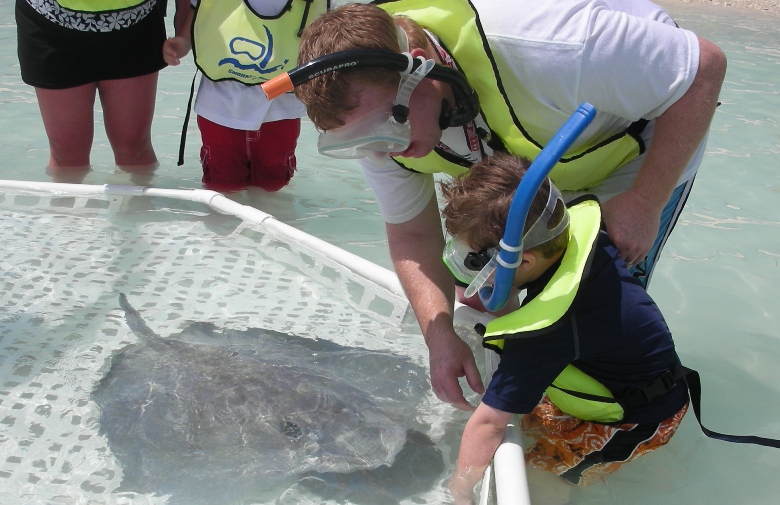 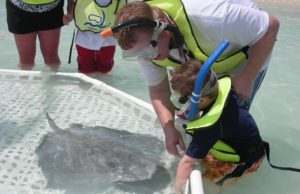 Ethan and Mike check out a stingray

The sky is blue, the water clear turquoise. We step off the Disney Wonder onto kids vacation heaven — a great big beach, a play structure anchored in the water. Machines dispensing all the ice cream and pop parents will let the kids have (as well as fresh fruit). There’s beach volley ball, big inner tubes, snorkeling gear. Did I mention Disney characters making appearances periodically through the day?

Welcome to Castaway Cay, Disney’s private island — as private as an island can be with 2,700 passengers including more than 1,000 kids laughing and playing and splashing. Five year old Ethan and his three hear old sisters Hannah Sitzman are entranced by the glass bottom boat ride to “see the fishies.” Again the Disney difference: the guide lifts the little ones down just on top of the glass so they can get up close and personal with the fish without getting wet. Each child gets a chance to feed the fish some oatmeal.

Maybe that’s because the crowds were so spread out. There was an adult-only beach (cabana massage anyone?), one for the crew, one just for teens and a shaded area where the organized kids’ programming continued. There’s water play for the littlest ones, beach volleyball, even a “whale Dig” where kids looked for “fossils” in the sand. Parents, like my cousins Mike and Jayme Sitzman, could get an hour to themselves (or longer) knowing the kids were happily occupied before getting them for some major sand castle building (Ever see a giant Mickey out of sand?) and tube play in the water.

“The perfect island paradise,” said Joe Tenczar, who was cruising from Orlando with his wife and young son. Castaway Cay is so popular that four night cruises this summer will be spending two days on the island. “The banana boat rides were really fun,” said 13 year old Becky Smeltzer.

“So much easier than going to the beach at home,” said Jay Bosh, cruising with his wife, their two kids and his wife’s family from Massachusetts. “You don’t have to lug a cooler or beach chairs or drive an hour.”

Waiters come around offering frothy concoctions. You can charge he drinks to your room. The bountiful lunch buffet, and ice cream, of course, is provided, as is food on the cruise ship.

No vacation is stress free with young kids. They get tired, hungry and cranky. They have to go to the bathroom three times during dinner. “But this ship really works. It’s about as stress free as you can get on a vacation with young kids,” said Bryan Sherman, cruising with his wife and two young daughters from Dallas.

While three year old Hannah gets some braids in her hair, Ethan and his dad “swim” with the stingrays — there are 51 here in the lagoon (their stingers carefully trimmed). The kids feed them, can snorkel with them or simply pet them. It’s a wonderful experience and not crowded or hurried.

Families who have cruised on other cruise lines say they think Disney’s island is by far the best. All I can say it’s a terrific place to spend a sunny day. No one gets bored. How could they? And we didn’t’ even explore all the island has to offer on bikes. We could have even gone parasailing! I love that we just get off the boat with the kids and someone hands us towels. We stop to give a howdy-do to Jack Sparrow, and can walk to the beach. And unlike other beach resorts, there are plenty of chairs and umbrellas.

“The beach has to be the best part,” said Laurie Bosch. Toddlers are playing in the sand, tweens are tossing a football on the beach, parents and kids are floating on giant inner tubes. Counselors are organizing games for the different age groups. I’m impressed that the area is so well shaded.
There’s just one problem, said Ken Phipps, who was celebrating his 60th birthday with his family — “There’s so much to do and you want to do everything so you don’t have enough time to relax!”

Back on board, the kids get ready for “graduation” on stage in the Walt Disney Theater with — you guessed it — Mickey and Minnie. They were very, very pleased with themselves. At dinner, five year old Ethan ordered Chicken fingers with a aide of salmon – f0r the third night in a row. Even at five, he loved being able to order anything he liked and as much as he liked.

Later that night, our last on board, we feed the kids and take them to the Oceaneer Club (Goofy came and played duck, duck goose!) While we treated ourselves to a dinner at Palo, the wonderful adult-only dinner on the ships 10th level. It is sophisticated — not a character or set of mouse ears in site. And once you pay the $15 charge, you can order whatever you like on the Northern Italian menu. We leave it to our waiter who brings us antipasto and calamari and fresh mozzarella and tomatoes, followed by some of the best tenderloin I’ve ever had. Did I mention the chocolate soufflé for desert?

But just as the soufflés were being served, my cousins got paged. The kids were crying. This is real life, after all, not a fantasy vacation. After a quick visit from mom, they were glad to stay until we finished dinner and then we all went to say goodbye to all of their favorite characters who had gathered in the atrium for one last go round of picture taking.

“I wish we didn’t have to leave,” Ethan said.

I think all of the kids felt the same way.